Halsey and the father of her soon-to-be bundle of joy enjoyed a picnic date together in Los Angeles and her growing baby bump could be seen in her fitted white top.

Halsey, 26, was seen out with her boyfriend Alev Aydin for the first time since sharing the exciting news that they’re expecting a baby together. The singer and her hunky beau, who have been pretty private about their romance, were photographed while having a picnic under the sun in Los Angeles, CA on Jan. 31. The lovebirds were sitting on a blanket while relaxing during the outing and looked comfortable and cozy together. 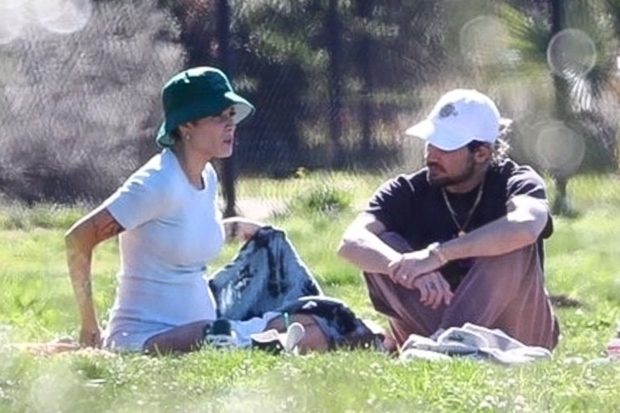 The mother-to-be cradled her baby bump at one point while wearing a long white dress with a blue patterned top over it. She also wore a green bucket hat, blue socks, and green high top Converse sneakers. Alev wore a red jacket over a black graphic T-shirt, tan jogging pants, white patterned socks, orange slip-ons and a white baseball cap.

The doting actor was spotted sweetly helping his lady love get up off the grass as they got ready to leave after the fun afternoon. Although we’re not used to seeing them together, this first sighting definitely seems to prove just how close they are as they get ready to welcome their little one into the world. Before their picnic, Halsey and Aydin were only spotted in Oct., when they were picking up art supplies in L.A.

Days before the relaxing picnic, Halsey got attention for sharing an adorable ultrasound photo of her baby’s feet. The already formed legs were also shown and the proud musician tagged Dr. Steve Rad, who also helped with the birth of Justin Timberlake and Jessica Biel‘s second child, Phineas, in the post. The cute pic got a lot of positive responses from fans, who are thrilled about the upcoming new addition.

Halsey also shared a bare baby bump pic that showed off her endometriosis scars. A tattoo that read the word, “BABY” was at the bottom middle part of her stomach and she drew in red arrows over the photo pointing to the scars, which surrounded the tattoo. “the scars that got me this angel,” she captioned the snapshot.