Kim Kardashian appeared to face the ultimate fashion putdown when she was seemingly snubbed by Vogue Editor-In-Chief Anna Wintour while attending the Fendi Spring 2023 show in New York City on Friday.

The apparent rebuff took place after the event’s finale, when Kim, 41, seemingly went to say hi to Anna, 72 – who is well known for her famously-icy demeanor – however, the magazine editor instead went to greet Sarah Jessica Parker, who was standing next to the reality star, in what many have interpreted as a clear snub.

Video of the moment was shared on TikTok, where it quickly went viral, with hundreds of users sharing their take on the awkward interaction.

In the clip, Kim is seen flashing an excited grin in Anna’s direction as the Vogue chief walked towards her and Sarah, 57. But instead of returning the Keeping Up With the Kardashians star’s happy greeting, Anna chose to lean in for a hug with Sarah. 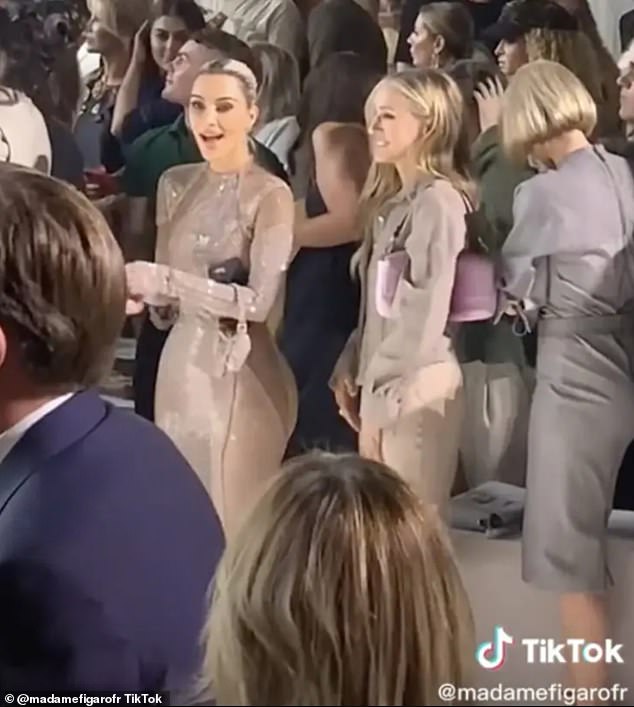 Yikes! Kim Kardashian appeared to get ‘snubbed’ by Anna Wintour, the Editor-In-Chief of Vogue Magazine while at the Fendi Spring 2023 show 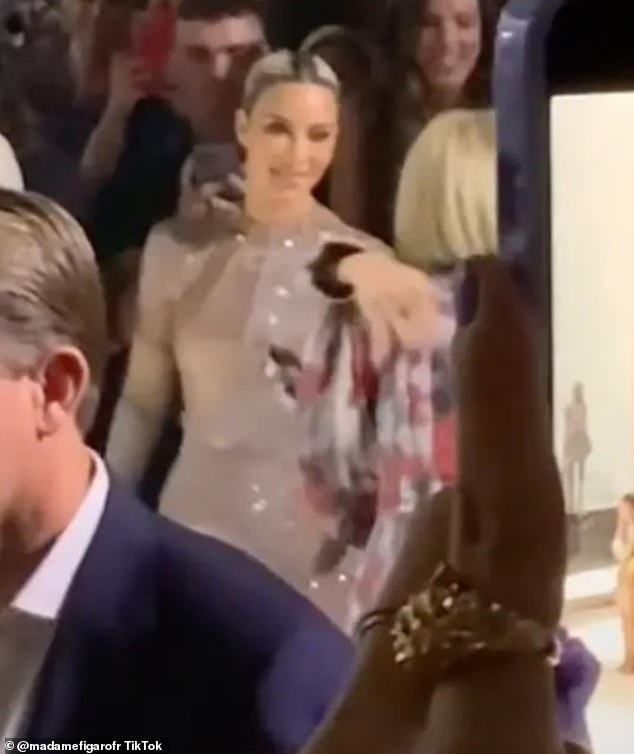 Awkward: The perceived snub took place on Friday after the show’s finale, when Kim appears to say hi to Anna – however Anna headed straight to Sarah Jessica Parker , who stood next to Kim

Kim – who has appeared on the cover of Vogue multiple times – handled the awkward moment like a pro, smiling and watching on as Anna greeted the Sex and the City star with a warm hug.

At the start of the now-viral clip, Kim and Sarah are seen standing side-by-side in front of their seats while clapping for the finale of the show, before Kim spotted Anna walking towards her and Sarah.

Kim could be seen mouthing the words, ‘Hi, how are you?’ as Sarah started waving and smiling to Anna.

Anna then walked straight to Sarah; they shared a hug as Kim awkwardly stood beside them.

The Vogue boss’s seemingly-frosty behavior has come as a surprise to many given that she and Kim appeared to have formed something of a friendship in recent years.

Anna has even bestowed upon Kim the honor of three US Vogue covers: two solo appearances in March 2022 and May 2019, and one with her then-partner Kanye West in April 2014.

Kim has also attended Anna’s iconic Met Gala multiple times, beginning in 2013, when she appeared on the red carpet while pregnant with her and Kanye’s first child, North West.

At the time, her attendance sparked something of a controversy in the fashion world, with many questioning whether the decision to invite the reality star was an indication that Anna’s once-impossibly high guest list standards had been relaxed.

Kim even addressed the debate around her invitation, tweeting: ‘I was Kanye’s plus one & so nervous! I didn’t know anyone & I’m sure no one wanted me there lol.’

In 2019, Anna spoke out about the Kardashians, specifically Kim and how her style has evolved.

When asked about the family’s style, Anna said: ‘You have to admire how they have created an empire, obviously through their personalities, and the creative genius of their mother. How they live the way they do I can’t possibly understand or fathom, living so much in the public eye, but obviously it works.’ 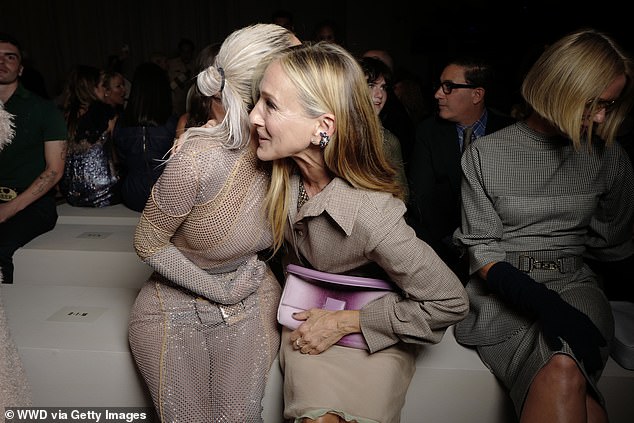 Catching up: Kim and Sarah Jessica had a warm exchange prior to the show, as they sat next to each other in the front row 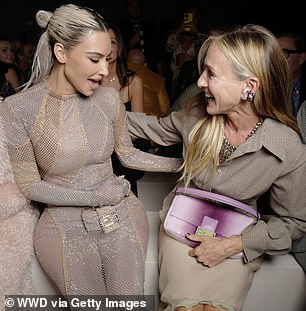 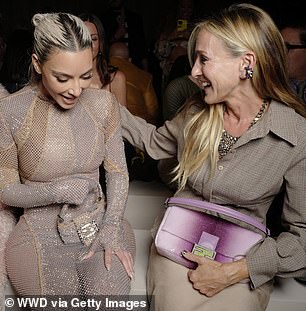 Good times: They star hugged and then chatted up a storm before the runway show kicked off; Sarah Jessica put an arm around Kim as they laughed and talked together 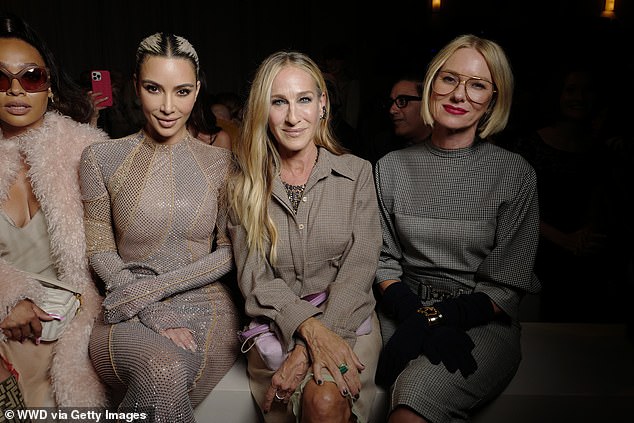 Earlier this year, Kim sat next to Anna during the Jean-Paul Gaultier Haute Couture Fashion Show for their Fall/Winter 2023 collection during Paris Fashion Week on July 6, 2022.

Kim and Sarah – who sat next to each other in the front row – had a warm exchange prior to the show.

They two stars hugged and chatted up a storm before the runway show kicked off; Sarah Jessica put an arm around Kim as they laughed and talked together.

The 41-year-old star brought her daughter North West, nine, to the show. 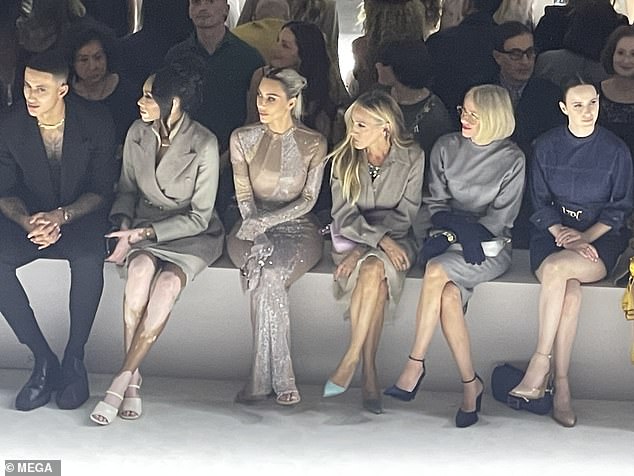 Kicking off: Winnie Harlow replaced La La in the seat next to Kim on the other side of Sarah Jessica when the runway show began

Striking: Kim wore the turtleneck dress with a matching sequin Fendi bag and glittery heels for even more sparkle

Kim sat in between her pal La La Anthony and Sarah Jessica, with Naomi Watts besides the SATC star pre-show; Winnie Harlow replaced La La in the seat next to Kim on the other side of Sarah Jessica when the runway show began.

The reality star showcased her blonde locks and her famous hourglass curves in a sheer sequin dress for the Fendi show in the Big Apple for New York Fashion Week on Friday night.

Fendi held the special celebration to celebrate the 25th anniversary of its famous baguette bag, which Sarah actually featured in her show Sex and the City on numerous occasions, with special guests hitting the runway, including supermodel Linda Evangelista and Bella Hadid.

Kim highlighted her incredible hourglass form in the clingy number, which was made of mesh and sequins in different colors. 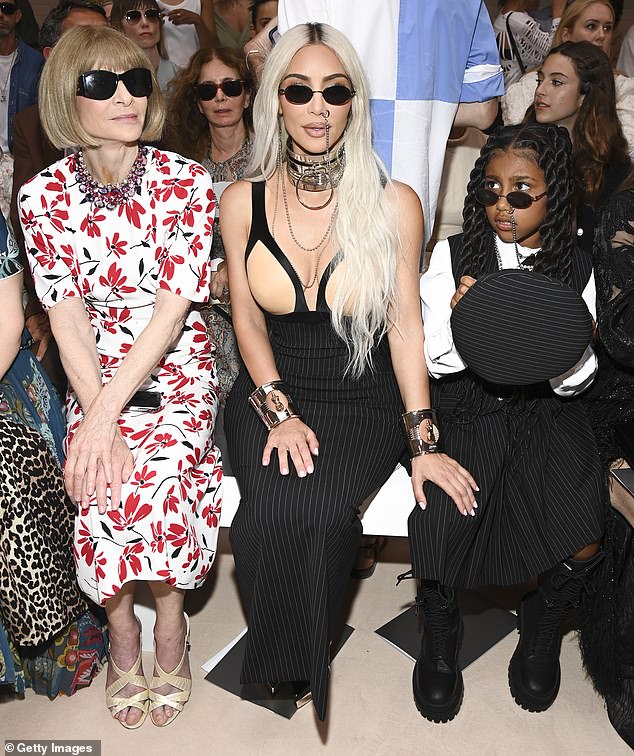 Front row: Kim sat next to Anna during the Jean-Paul Gaultier Haute Couture Fashion Show for their Fall/Winter 2023 collection during Paris Fashion Week on July 6, 2022 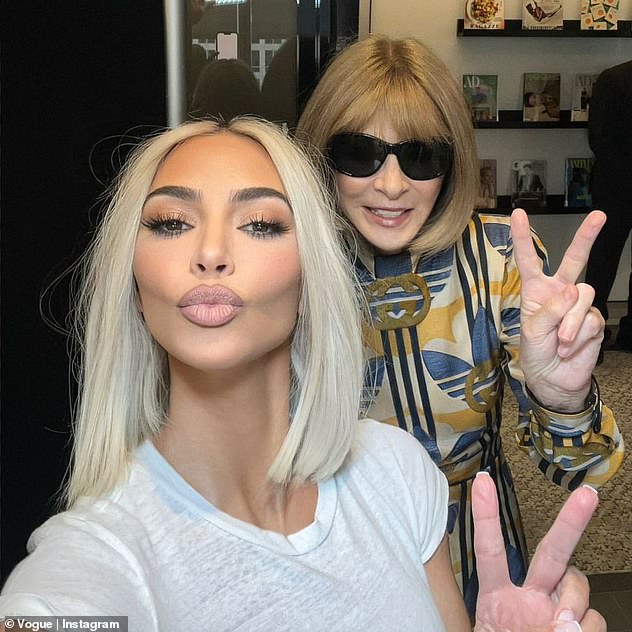 Strike a pose: In 2019, Anna spoke out about the Kardashians, specifically Kim and how her style has evolved

The frock had a patchwork style and gazed her feet with long-sleeves that completely covered her entire hands for a more dramatic effect.

The cream, white and blue mesh dress showcased her backside, as well as her flat midriff and ample cleavage.

Kim wore the turtleneck dress with a matching sequin Fendi bag and glittery heels for even more sparkle.

Sarah looked chic in a gray blouse with a green and cream skirt; the actress added aqua heels and a purple Fendi baguette handbag in honor of its milestone anniversary.