Meg Bellamy, 19, who will star as Kate Middleton in The Crown once performed for the Duke of Kent as a drama student by singing a medley from Hamilton

She is set to play one of the most famous women in the world to an audience of millions, but fledgling actress Meg Bellamy has already proven she can entertain royalty.

The 19-year-old, who has no professional on-screen experience, was thrust into the limelight last week after it was announced she will star as a young Kate Middleton in the final season of The Crown.

But The Mail on Sunday can reveal that the former head girl performed for the Queen’s cousin, the Duke of Kent, as a drama student in 2018.

Bellamy – known locally in Berkshire as Meg Smith – sang a medley from the musical Hamilton at a gala concert held by public school Wellington College to celebrate the opening of its performing arts centre. 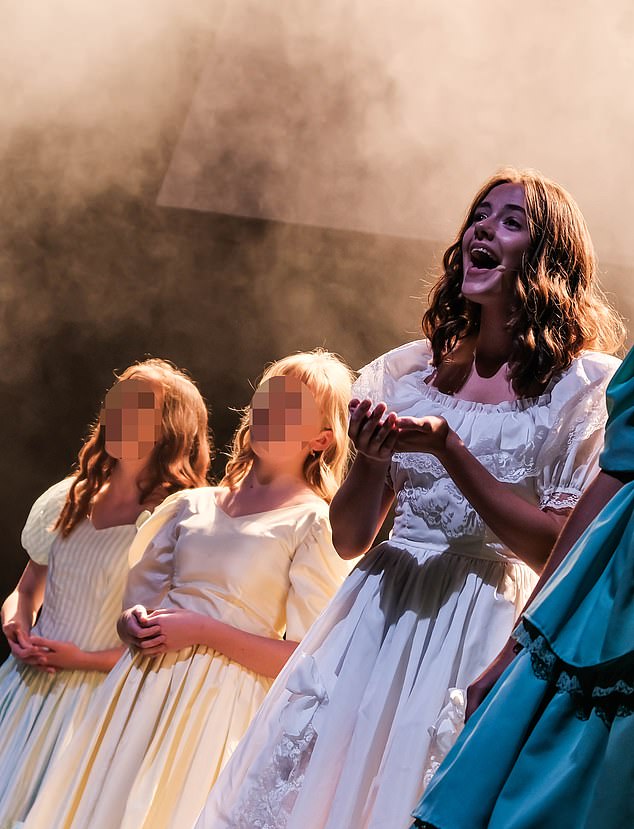 Seven local schools were involved in the dance, drama and music recital in front of 900 guests at the centre in Berkshire, the county where the Duchess was raised.

Alongside fellow pupils from the St Crispin’s School in Wokingham – where she was head girl – Bellamy sang a ‘toe-tapping Hamilton medley’ dressed as one of the Schuyler Sisters, wealthy New York socialites.

Bellamy was plucked from obscurity after submitting a self-taped audition following a casting call on social media.

The star in waiting, who previously worked as a character performer at Legoland, revealed her excitement yesterday.

‘Oh boy, it’s official!’, she wrote in an Instagram story. ‘So beyond excited! Cannot wait to join this wonderful, wonderful project and so honoured to be working alongside such a talented cast.’

Bellamy, who will act out Prince William and Kate Middleton’s courtship alongside fellow novice Ed McVey, 23, was supported yesterday by her real boyfriend, filmmaker and acrobat Connor Dutton.

Dutton, 25, who also worked at Legoland, wrote: ‘I’m thrilled to share with you that my gorgeously talented girlfriend will be playing Kate Middleton in Series 6 of Netflix’s The Crown. I’m so proud of you baby.’

Bellamy responded: ‘I LOVE YOU SO MUCH’.

McVey and Bellamy will also appear alongside 16-year-old Rufus Kampa in the show’s final series, which begins filming this autumn. Season six will portray the Queen’s reign up to the early 2000s and chronicle the aftermath of Diana’s death.