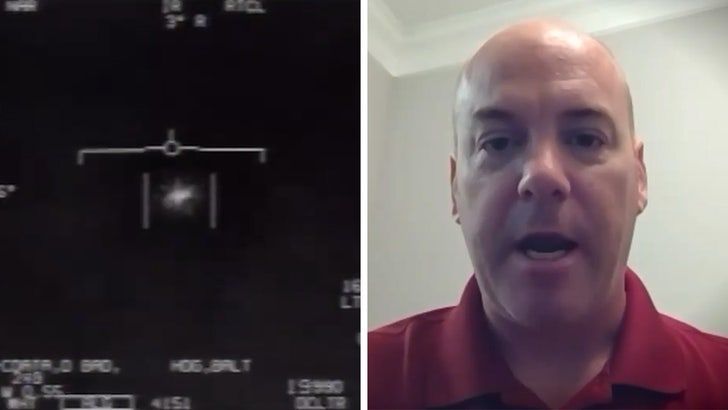 It’s been nearly two decades since military aviator Chad Underwood filmed the “Tic Tac” UFO sighting … but for the first time EVER he’s breaking his silence in front of a camera.

Underwood’s highly-anticipated interview will go down Wednesday at noon PT on Jeremy Corbell‘s YouTube show “Extraordinary Beliefs.” The video — filmed in November 2004 off the coast of San Diego — was captured off the left wing of Chad’s F/A-18 Super Hornet.

The sighting and filming is considered one of the most famous and important videos in UFO history … largely because a military officer filmed it during an official flight-training exercise. The video was also famously declassified by the Pentagon in 2017.

The video shows an object go from 80,000 feet to sea level in less than a second and a half … the forces of which human engineering and, for that matter, humans cannot withstand. The object had no wings, no obvious propulsion system and no exhaust.

Underwood, at the time a Navy Weapon Systems Officer on the elite squadron dubbed Black Aces, will offer insight into his encounter with the UFO. He’ll also clarify many details the public has been wanting to hear … as in, the footage he shot is only the beginning.

The half-hour interview will cover a myriad of subjects … like the origin of the name “Tic Tac” UFO. He’ll also talk about behavioral sightings and if his kids ask him about alien encounters.

As we previously reported … the Pentagon released a 9-page report last month in what was supposed to offer insight on a rash of recent UAP (unidentified aerial phenomena) sightings.

Instead, the report turned out to be a nothing burger … ’cause the Office of the Director of National Intelligence only noted that 143 of the 144 flying objects spotted since 2004 remain unexplained.