"Pots-and-pans music" is what Keeho, the leader of P1Harmony, lovingly calls the K-pop group's songs. They're loud, explosive, and essentially caffeine mainlined through your eardrums — all in the best way possible, of course.

"Because our music is so strong, we try to portray that in our hair and makeup as well," Keeho continues. "For me, my hair is all slicked back for our new song, 'Scared,' and our makeup is a lot darker than [for our debut single,] 'Siren.'"

In fact, Jongseob, P1Harmony's youngest member, adds their strikingly different hair colors, like Theo's whimsical light pink, Intak's sleek jet black, and Keeho's enigmatic navy blue, balance each other out and express the range of emotions portrayed in their lyrics and melodies.

But this is just a basic overview of P1Harmony and the intense aesthetic they've been building for the past six months since debuting in October 2020. In advance of the release of their new EP, Disharmony: Break Out, today, April 20, I sat down with the rookie K-pop group via Zoom to get a deeper look at each member, their individual relationships to beauty, and how they are choosing to present themselves now that they are on the world's stage. 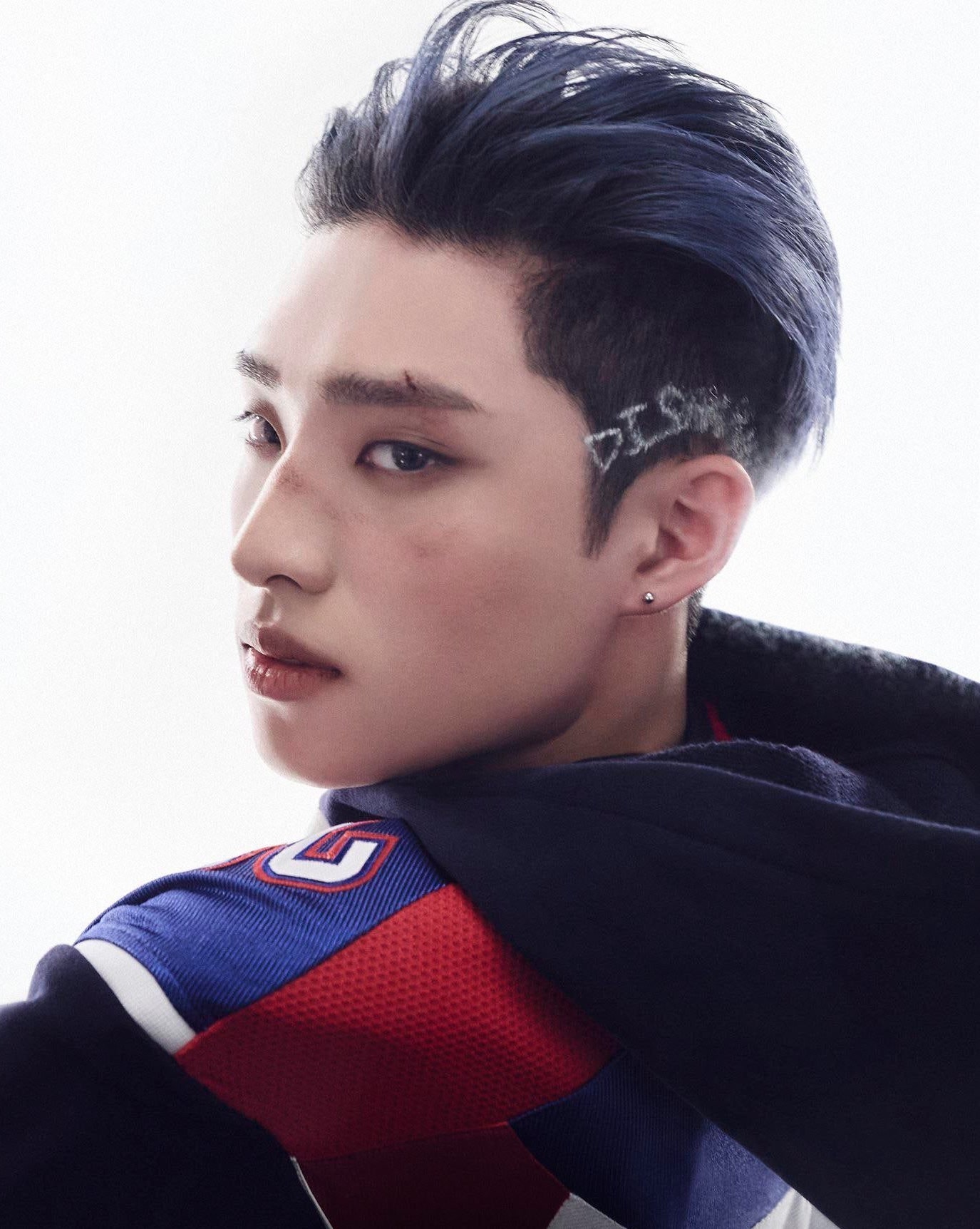 When I ask Keeho which P1Harmony song fits his personality best, he replies, "You can't really fit me in a box like that. There are various characters I can be." The 19-year-old from Canada even wears many hats throughout our interview. Not only is Keeho the group's official leader, but he's also their unofficial translator, color commentator, and storyteller — he truly has an aside or anecdote to share about everything.

The first tale Keeho tells dates back to second grade, when he begged his mom to let him get blonde streaks in his hair. "I was that kid in class," he remarks.

Then, Keeho delves into how his family introduced him to the wonders of beauty growing up. His mom, in particular, made him "do a five-, six-step skin-care routine," he recalls. Every morning before school, he'd splash his face with warm water ("must be warm water, so you open up the pores") and wash up with cleansing foam. Then, he'd rinse it off with cold water ("so you close them").  Although this isn't scientifically true, I'm glad this worked for him.

Last but not least, Keeho would (and still does) reach for sunscreen — "always sunscreen," he emphasizes. "My mom said, 'If you don't put it on, you're going to age like a raisin.'"

Keeho's older sister, on the other hand, brought him into the world of makeup by employing him as her guinea pig for testing out new looks. "I would let my sister put makeup on me all the time," Keeho says, mentioning Halloween as a common occasion for her artistry. They even playfully filmed YouTube beauty tutorials and challenges together.

One aspect of beauty Keeho has yet to try is a manicure, but he's ready to dive into that realm. "I think it would be fun," he says. A$AP Rocky's eye nail art that he showed off front row at Prada back in October 2019 is Keeho's major inspiration. 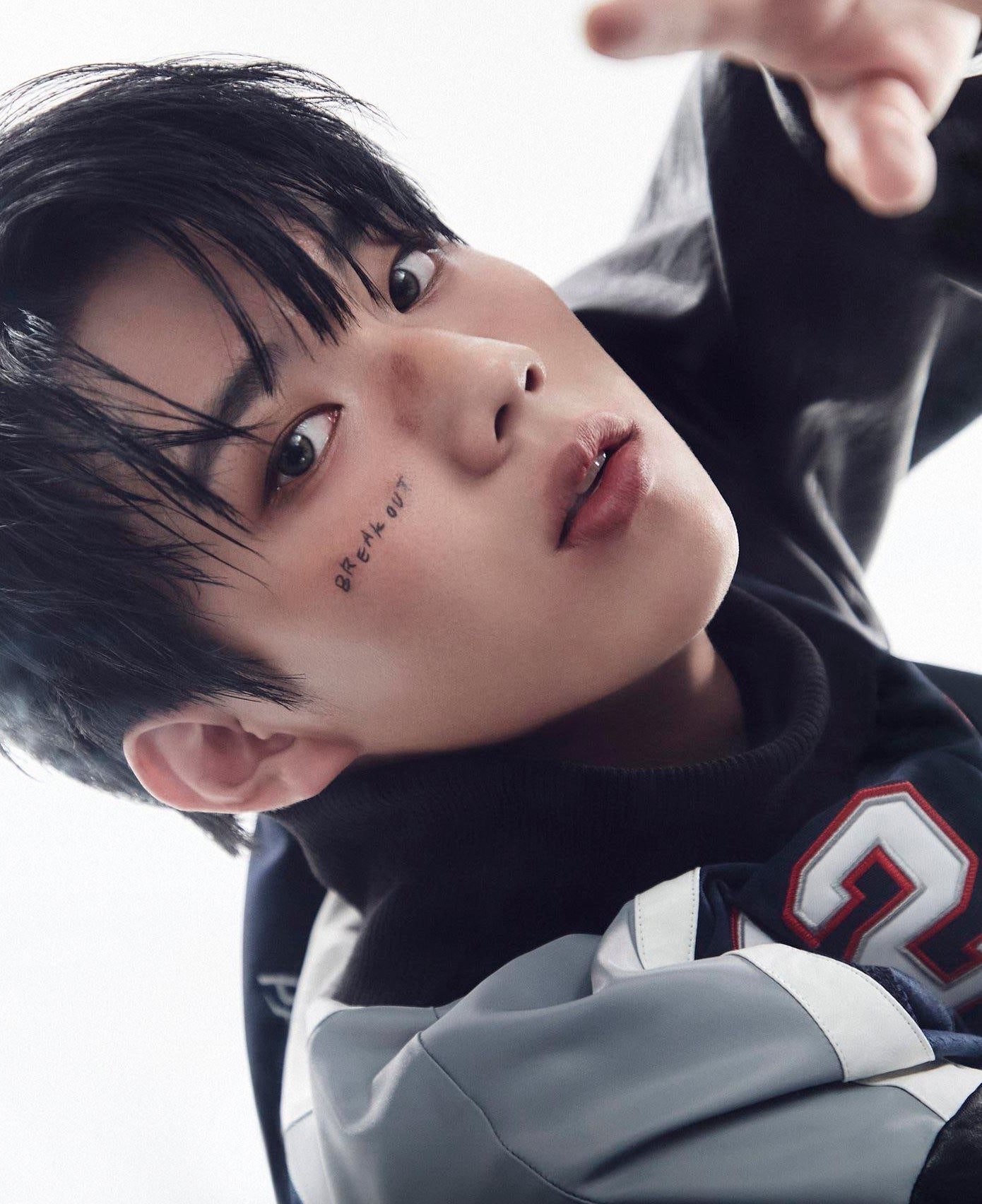 Another unofficial title Keeho has taken on within P1Harmony is hairstylist. Intak, the group's 17-year-old charismatic rapper and star dancer, credits him for his hair-care routine. "I learned how to use hair serum to volumize my hair when I go out," Intak says. Keeho goes on to explain that they both have incredibly dry hair, so he recommended his favorite moisturizing products to Intak and told him to rake them through his hair while it's still wet and only slightly towel-dried. Intak was so pleased with the result that he went out and bought the same products that day.

Although he has kept his hair black throughout his career so far, Intak is quick to share he's very experimental with beauty. For performances in the past, he's adorned his eyes with bloody scratch-like liner and ultra-sooty smoky eyes. Plus, you're about to see some cheek art on him and dramatically flushed cheeks.

Unlike Keeho, Intak didn't get into skin care until after debuting. "I've started visiting the dermatologist frequently," he says. "They gave me a set [of products] that includes [everything I need]." His favorite is a mask infused with avocado and peppermint, like the Tonymoly I'm Real Avocado Mask Sheet or Skinfood's Pear Mint Food Mask, which quenches his dehydrated skin. 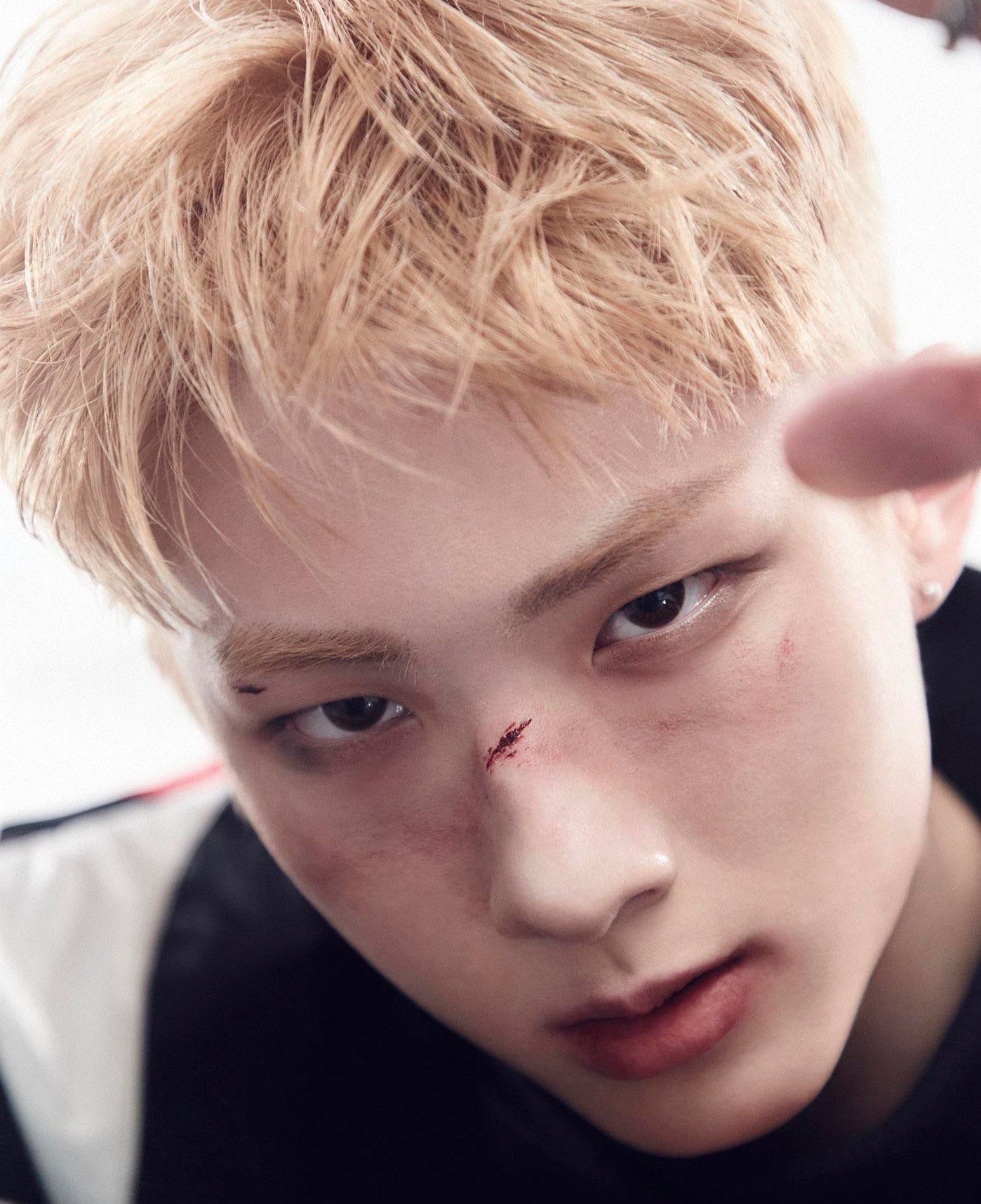 Spoken like a true Libra, Jiung is the first to mention he enjoys expressing himself through beauty and fashion. "[They are] really important things," the 19-year-old explains in English. "I always try to learn how to express myself that way. So the more I know, the more I can do."

However, when I ask Jiung what kinds of looks he feels the most confident in, he laughs before taking time to think about it. (In the meantime, Keeho shares he knows what he, personally, is least confident in: T-shirts, due to his long arms.) "This is hard," Jiung groans. I must say his short honey-blonde hair — a look he's always been curious about trying — is definitely bringing out a particularly magnetic side of him, as seen in the P-side track video for "If You Call Me."

When he was younger, Jiung dabbled in all different kinds of haircuts, colors, and perms, he lists off. The latter of which he looks forward to trying out again now as a K-pop star.

When the members were just trainees, Keeho helps Jiung recount a time when he wanted to fill in his eyebrows. "He did not how to do it at all," Keeho says. "He got a Sharpie and started coloring in his eyebrows. It was devastating, to say the least, for the people who had to see it."

"It was art," Jiung interjects. Now, he proudly declares he has a proper brow powder. 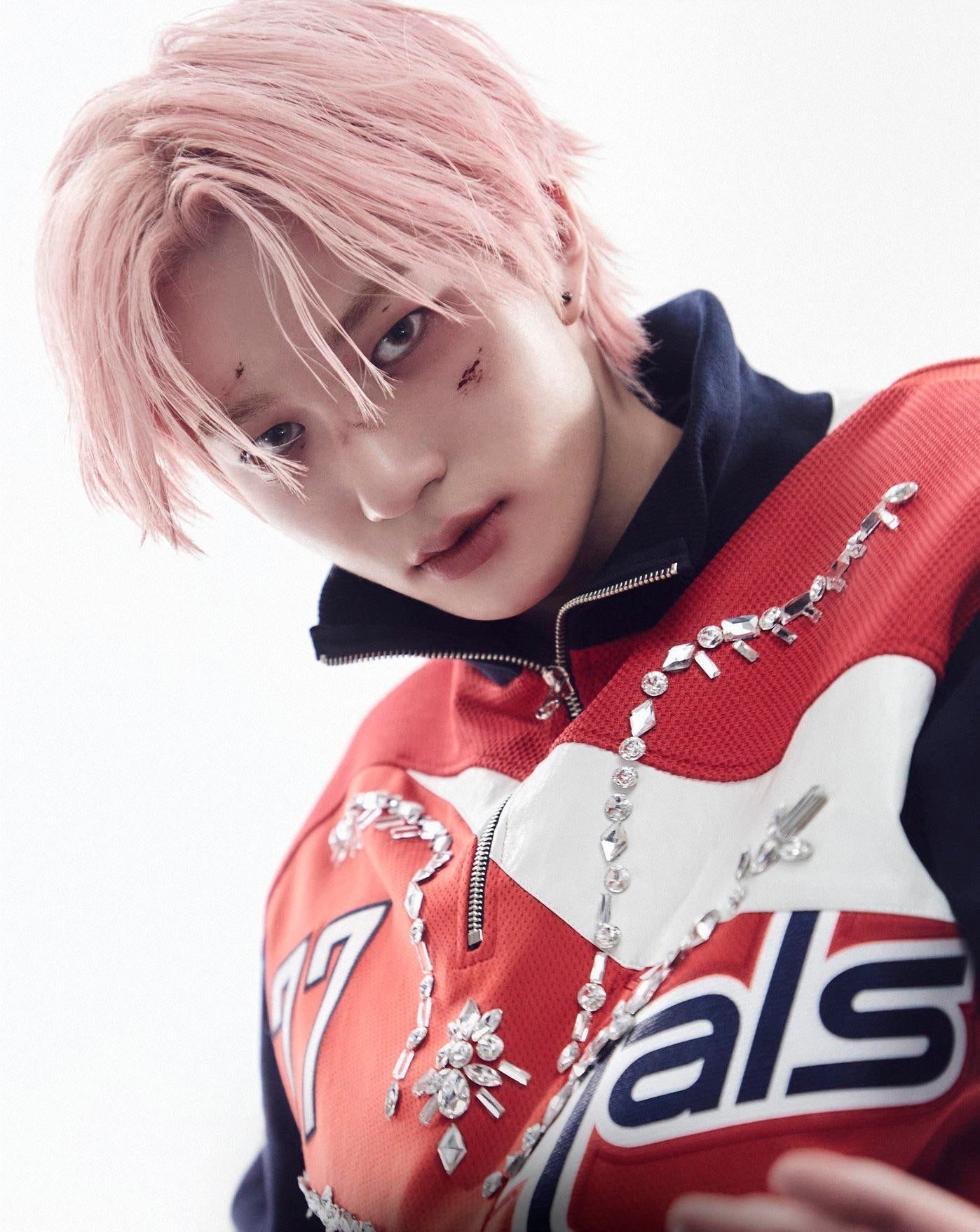 Theo, P1Harmony's straightforward vocalist, is admittedly a sneakerhead. He strictly wears Jordans, according to Keeho's translation. Air Jordan 1s are Theo's favorite style, but he can't pick a color that he's the biggest fan of. He can tell you what he feels least confident in, though: shorts and short-sleeved shirts. So if you barely see Theo in summery clothes, now you know why. (However, he doesn't offer up an exact explanation.)

Since elementary school, the now-19-year-old has permed and colored his hair every shade of ROYGBIV, including red, gray, and even blue for one summer break — all thanks to his mom, who is a hairstylist. This is a revelation even many of the other members weren't privy to, much to the chagrin of Keeho. "It's annoying me right now because his hair is healthy," he remarks. "My hair looks like a broom."

Knowing his hair is healthy comes as a shock to me, though, as Theo has gone from white-blonde to rosy-pink over the past six months. (Let's be real, that's a transformation few people's hair can handle.) He's also been able to grow out hair; it falls past his eyebrows and is starting to graze his shoulders in the back.

Honestly, Theo is ready for it to be short again, he shares. "I like my long hair, but I don't like it being in my face," he asserts. "I can't really maintain it. I bleached it so much that it flips in all different directions." 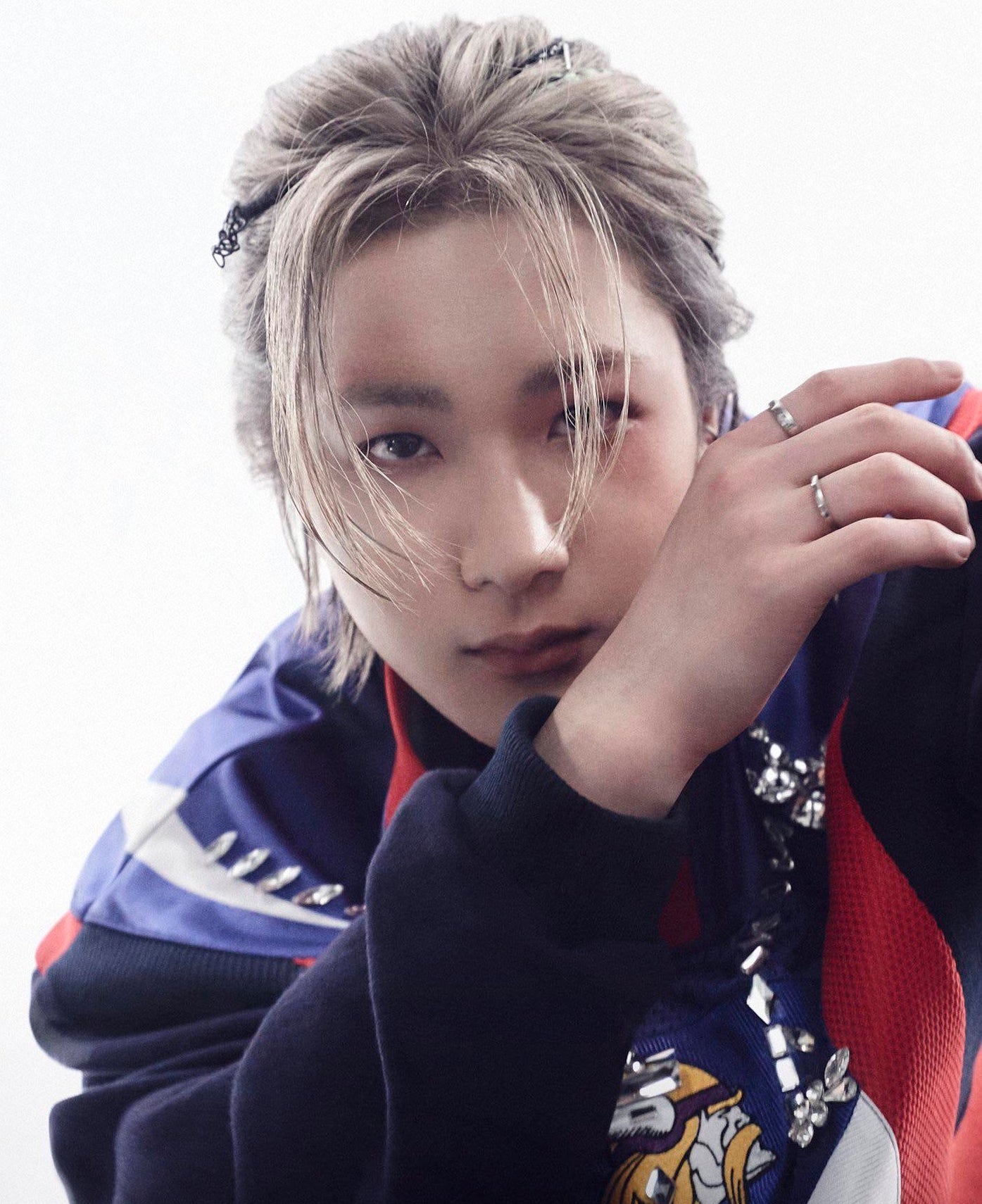 Before our interview officially started, the members and I exchanged weird facts about ourselves to get to know each other better beyond our beauty routines. Keeho revealed his left eyebrow has been twitching lately, and he needs to cuddle a body pillow to fall asleep. Intak has a freckle on his finger that his grandma often mistakes for dirt and tries to wipe off. Jiung had pet geckos, scorpions, and tarantulas growing up. Jongseob loves mint chocolate. Theo can't burp, and Soul enjoys petting insects.

But that's not the weirdest thing about him or any of the members. The strangest thing about the boys is that "Soul doesn't do anything at all [for his skin-care routine], and his skin is actually pretty good," Keeho says. (You can scroll through Soul's selfies on P1Harmony's Twitter to confirm this, but spoiler: His complexion is immaculate.)

Soul, 16, goes on to explain that his skin is incredibly dry and sensitive, so much so that even cleansing makes his face turn red and any bit of friction causes bumps to form. Needless to say, he's scared to put anything on his face. "I just do cleansing foam and leave it at that," Soul admits. Makeup isn't off the table, though. Soul is no stranger to subtle washes of pink shadow on his lids and fake eyebrow piercings made out of silver studs.

Although Soul is seemingly one of the shyest members and keeps to himself for most of the interview, he's an intense rockstar at heart. He favors P1Harmony's more aggressive, hard-hitting songs, like their new title song, "Scared."

Raise your hand if you'd like to see Soul with thick, black kohl or graphic blue liner and long, raven hair, perhaps paired with a studded leather jacket over a ripped-up T-shirt. OK, great; I'm not the only one. For now, we'll have to appreciate his bob-length ashy-blonde hair. 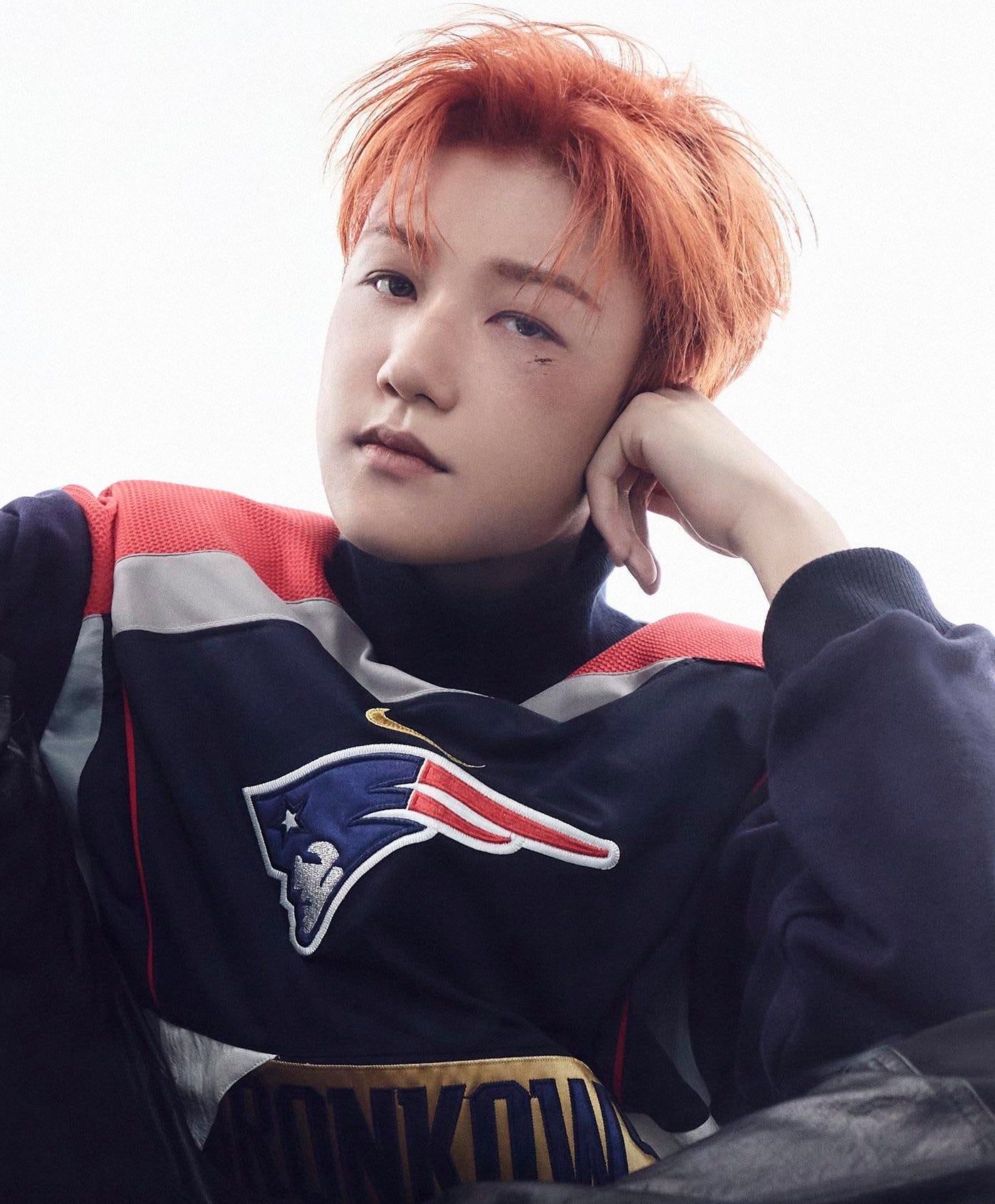 Other than his nuggets of knowledge about the way P1Harmony reflects their music in their hair and makeup, Jongseob mostly listens throughout the interview. Luckily, the 15-year-old rapper/songwriter did pipe up to share his skin-care routine.

First, Jongseob double-cleanses to remove his makeup, starting with cleansing oil and following up with a foam cleanser. Serum is slathered on next, then moisturizer. When his skin is feeling especially dry, Jongseob layers a gel cream on top as a sleeping mask — a tactic I'd never considered before. Typically, I reach for them in reverse order.

Jongseob's hair has also been through the wringer since P1Harmony's debut. Last October, he colored his hair lilac and gradually went darker shades of purple until it was an electric violet hue. Most recently, though, his dye job has been a fiery orange. Next, Jongseob says he wants to try gray with an ash tone.

And this is just the beginning of P1Harmony's journey through the mystical world of K-pop beauty. This time next year, they're sure to have experimented with even bolder, brighter, and more eccentric looks. For now, you can check out a teaser for their brand-new music video for "Scared" of their latest EP, Disharmony: Break Out, below.

All products featured on Allure are independently selected by our editors. However, when you buy something through our retail links, we may earn an affiliate commission.