Rishi Sunak was forced to deny he was ‘inconsistent’ on tax during his lone grilling from Andrew Neil.

The former Chancellor defended U-turning on his stance on cutting VAT on energy bills and dismissed suggestions he has shown a ‘lack of consistency’ and ‘bad judgment’.

The former chancellor told Andrew Neil he had ‘always said from the beginning’ that he would ‘stand ready to do more’ to help people with energy bills if the cost of living worsened. 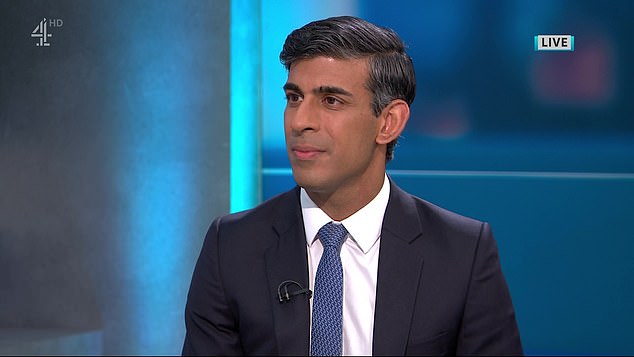 The thirty-minute probe aired on The Andrew Neil Show Special at 7.30pm on Channel Four 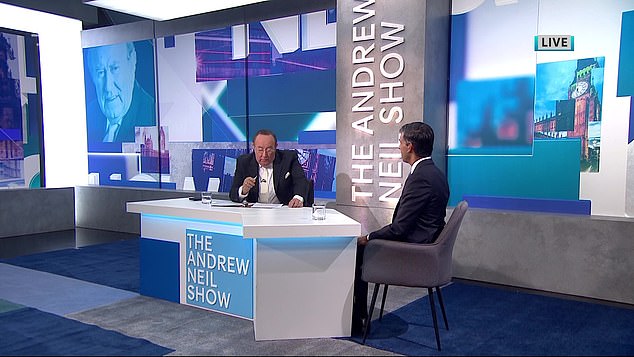 The veteran broadcaster asked him: ‘In February you told the Commons that cutting VAT on energy bills would, these are your words, ‘disproportionately benefit wealthy candidates’.

‘Now as your campaign fails to gain traction among Tory members you propose to suspend VAT on energy bills – not just bad judgment but lack of consistency.’

Mr Sunak replied: ‘No, absolutely not. I’ve always said from the beginning that as we knew more about what energy bills would actually be in the autumn that I will stand ready to do more.’

Mr Sunak hit back saying he was aware that the cut was a ‘blunt instrument’ but he was reacting to higher estimates for the energy price cap made by Ofgem more recently.

Mr Neil lambasted Mr Sunak’s record in charge of the economy, questioning whether he was ‘penalising workers’ with his tax rises earlier this year which hit lower earners by increasing National Insurance contributions.

Rishi Sunak insisted he wants to ‘get to grips with inflation as quickly as possible because inflation makes everybody poorer’.

The Tory leadership hopeful replied: ‘No, if you look at what’s happening around the world, it’s inflation that is slowing economies down. It’s rising interest rates that are already putting a brake on economic activity.

‘And my concern is that I want to get to grips with inflation as quickly as possible because inflation makes everybody poorer. It erodes people’s living standards.’

He also insisted his policy to hike national insurance thresholds was ‘undoubtedly, objectively progressive’ when Neil suggested it penalised workers.

‘It’s an entirely progressive measure,’ Mr Sunak said. ‘Raising thresholds means that those with the broadest shoulders contribute the most.’

The heated exchange resulted in Neil saying that the OECD has said that Mr Sunak’s plans will result in a recession for the UK economy – which the former Chancellor disputed.

It came as Mr Sunak sat down with the fearless interviewer Mr Neil on Channel Four – after frontrunner Liz Truss refused to do the same.

Mr Neil once again extended the hand to come on his show to the Foreign Secretary – saying the ‘invitation is still open’.

The Southampton-born millionaire repeated his claims that tax rises were necessary for paying for Covid measures and said that he did not want to pass debt onto future generations.

He said that it would be the ‘easiest thing in the world’ to cut taxes to aide his leadership campaign but that he thought it was not the responsible thing to do. 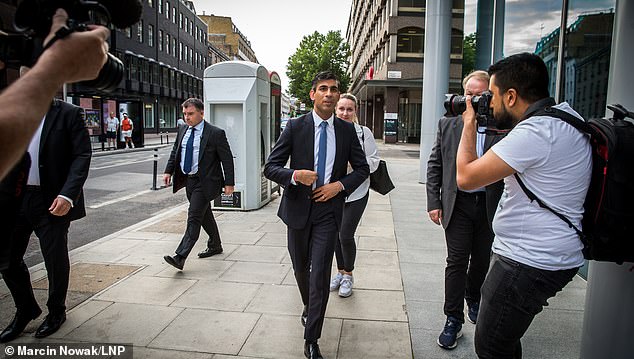 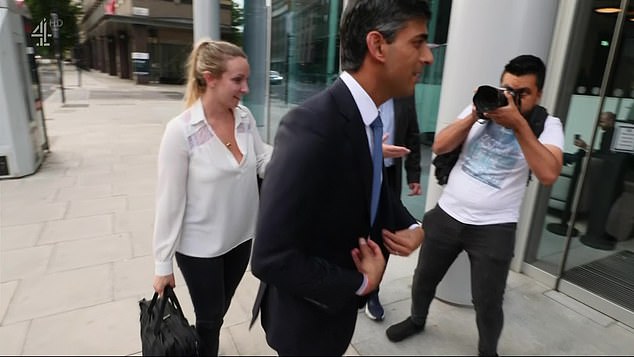 Mr Neil hit out at Mr Sunak’s wife’s non-dom status which hit the papers earlier this year but the former Chancellor attempted to draw a line under the line of questioning, saying that he was the one running for office – not his partner.

The line of questioning made Mr Sunak visibly uncomfortable as he tried to move on from the scandal.

The tax cuts intended to fund the NHS were another line with Mr Neil used to attack Mr Sunak – as the interviewer quoted suggestions that the waiting lists on the NHS will reach 10 million in the next two years.

Mr Sunak attempted to distance himself from the Conservative’s record on health after the fierce Scot tried to pin the NHS’s problems on him – saying that he has left Government to change course on the NHS.

He added that he wanted to set up over 100 ‘elective surgery hubs’ to bring down the backlog.

The thirty-minute probe aired on The Andrew Neil Show Special at 7.30pm.

Mr Sunak had work to do before the interview to catch up to his leadership rival as a poll revealed yesterday that Liz Truss is ‘more in touch with the British public’s concerns’ than the former Chancellor, according to a poll of Conservative voters.

The poll, carried out by Opinium Research, found that 38 percent of Tory voters said the Foreign Secretary is most in touch with the public’s concerns, compared with just 18 percent who sided with the former Chancellor on the question.

Mr Sunak only has days until the first ballots are sent out via post next week to reverse his fortunes – days after a lacklustre appearance at a hustings in Leeds, Yorkshire.

Mr Neil took potshots at Ms Truss’s refusal to sit down with him – including by referencing her debate with Mr Sunak on TalkTV being cut short by presenter Kate McCann fainting. 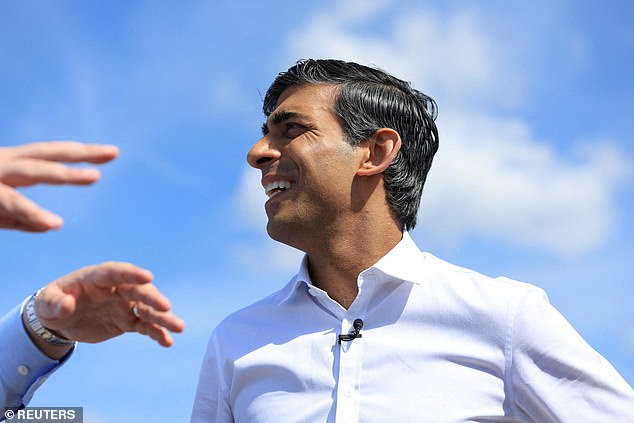 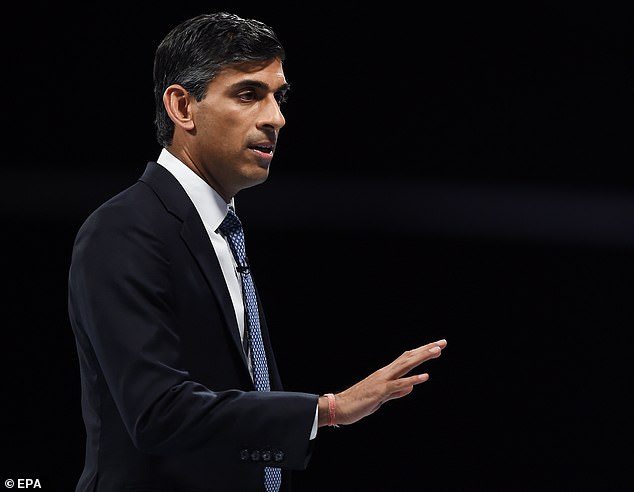 Mr Sunak only has days until the first ballots are sent out via post next week to reverse his fortunes – days after a lacklustre appearance at a hustings in Leeds, Yorkshire (pictured) 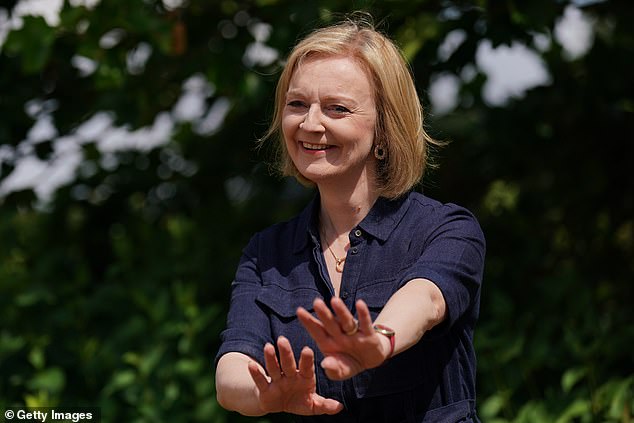 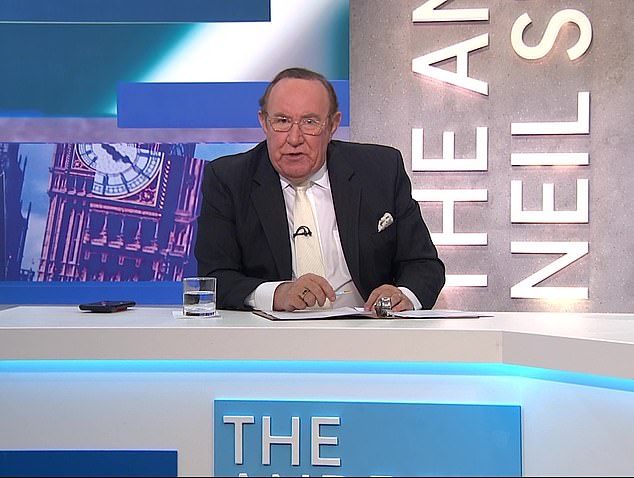 Mr Neil’s leadership interviews became a staple of general election campaigns during his time at the BBC – where he became the heir to hard-nosed questioner Jeremy Paxman.

TalkTV show The News Desk shared the results on Wednesday evening, after Mr Sunak earlier pledged to temporarily scrap taxes on energy bills paid by households as part of a ‘winter plan’ to ease the cost-of-living crisis.

A second question asked by Opinium about spending priorities found that 44 percent of Tory voters want to see tax cuts, compared with 22 percent who want to see an increase in government spending, The News Desk reported. 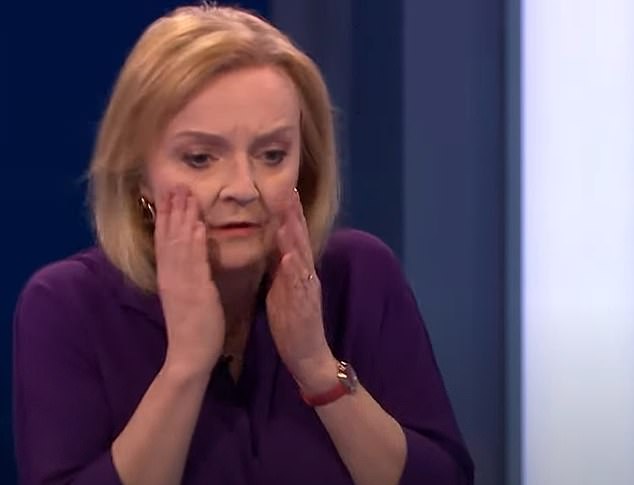 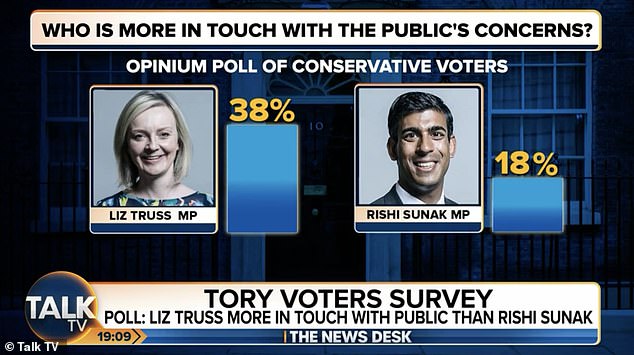 The poll, carried out by Opinium, found that 38 percent of Tory voters said the Foreign Secretary is most in touch with the public’s concerns, compared with just 18 percent who sided with the former Chancellor on the question

However, a third question posed to the general population found that Mr Sunak was ahead of both Liz Truss and opposition Labour leader Sir Keir Starmer when asked ‘Who would make the best Prime Minister?’

While the results were close-run, Mr Sunak led with 41 percent. Sir Keir came in second place with 38 percent, while Ms Truss trailed with 33 percent.

The results suggested that while Mr Sunak is a popular candidate for Prime Minister amongst Britain’s general public, Tory voters feel Ms Truss is better suited to understanding the public’s concerns should she successfully reach Downing Street.

Ultimately, it will be Tory party members who decide who replaces incumbent Prime Minister Boris Johnson when they vote in September for the next party leader.

It came after Liz Truss reignited her economic row with Rishi Sunak today as she accused the former chancellor of ‘scaremongering’ over his warnings about her economic plans for power.

The Foreign Secretary has vowed to bring in tax cuts worth £20billion and increase defence spending by around £23billion if she becomes party leader and prime minister.

Mr Sunak, in contrast, has been more cautious, warning that inflation – currently 9.4 per cent and still expected to rise – must come down before taxes are cut.

He has also sited comments by Professor Patrick Minford, a Truss supporter, that her plans could see interest rates hit seven per cent, adding more than £5000 a month to the average mortgage.

The different positions have helped Ms Truss lead polls of Tory members who will vote to put one of them in No10.

Addressing the criticisms of her economic ideas, Ms Truss told the Conservative Home website: ‘Frankly this is just scaremongering. Inflation is projected to come down next year. And the Bank of England is independent, it makes decisions about interest rates completely independently of government.’

During a visit to Norfolk today, the Foreign Secretary was asked if she can actually deliver on all the pledges and promises she has made.

Speaking to broadcasters, Ms Truss said: ‘We can deliver. I will reverse the national insurance increase. We didn’t need to do it. And we can afford that within our budget. I also think that by keeping taxes low, we will attract more business and investment into counties like Norfolk, which will help grow the economy and bring those tax revenues in.’ 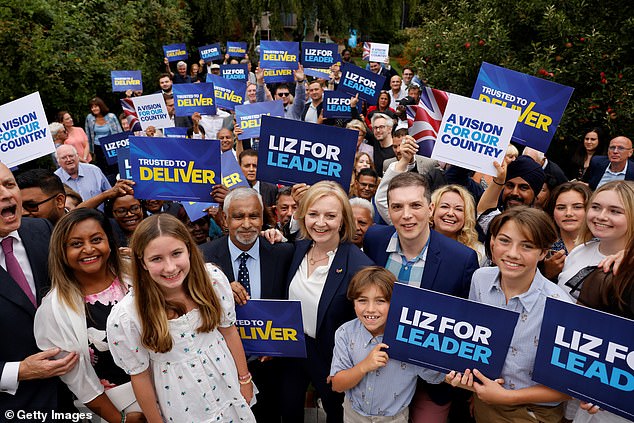 Pictured: Liz Truss (centre) appears along-side supporters after delivering a speech at a private house in Woodford Green, London on Wednesday night. Ms Truss has outlined a wider range of tax cuts, a popular policy among Tory voters according to the Opinium poll 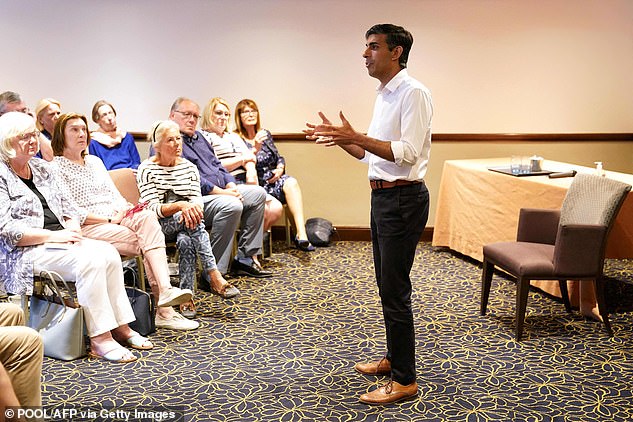 Pictured: Former chancellor to the exchequer and candidate to be the Leader of the Conservative Party, and Britain’s next Prime Minister Rishi Sunak, delivers a speech during a campaign event in Newmarket, on July 27, 2022

It came as Cabinet minister Ben Wallace delivered a possibly fatal blow to Mr Sunak’s hopes of becoming prime minister by backing rival Team Truss and castigating him for walking out on Boris Johnson’s Government.

The Defence Secretary is hugely popular with Tory members who will vote for the next party leader and was tipped to run himself.

But after ruling himself out he finally went public to back the Foreign Secretary last night Mr Wallace, a former soldier, said she was ‘authentic, honest and experienced’ with the ‘integrity’ for the top job.

He also said he was swung by her plan to increase defence spending and accused Mr Sunak of trying to block ‘vital’ money during his time as chancellor.

And in an interview with the Sun and writing in the Times he laid into the former Chancellor, echoing supporter of Mr Johnson by suggesting he was pivotal in the PM’s downfall.