Wynonna Judd is addressing rumors she's locked in a bitter battle with her sister, Ashley Judd, over their mom Naomi Judd's estate.

"Someone told me while I was at Ashley's house, 'Hey, did you know that they're saying this about you?'" the Judds singer, 58, told People magazine. "I went, 'Huh? I'm fighting with Ashley? Oh. Again?'"

After her singing partner mom's death by suicide in April, it was reported that Naomi cut Wynonna and Ashley out of her will. Naomi, who died at 76, appointed her husband of 33 years, Larry Strickland, as executor of her $25 million estate with "full authority and discretion" over everything. According to reports, Wynonna was "upset" at being excluded from the will, believing "she was a major force behind her and Naomi's success." A report in the tabloid Star claimed the sisters were going "head-to-head" in a battle over the estate.

Wynonna acknowledged to People that, yes, Strickland is the executor of Naomi's estate. But when he dies, she and her actress sister will then "split" the estate. She has no plans to contest the will. 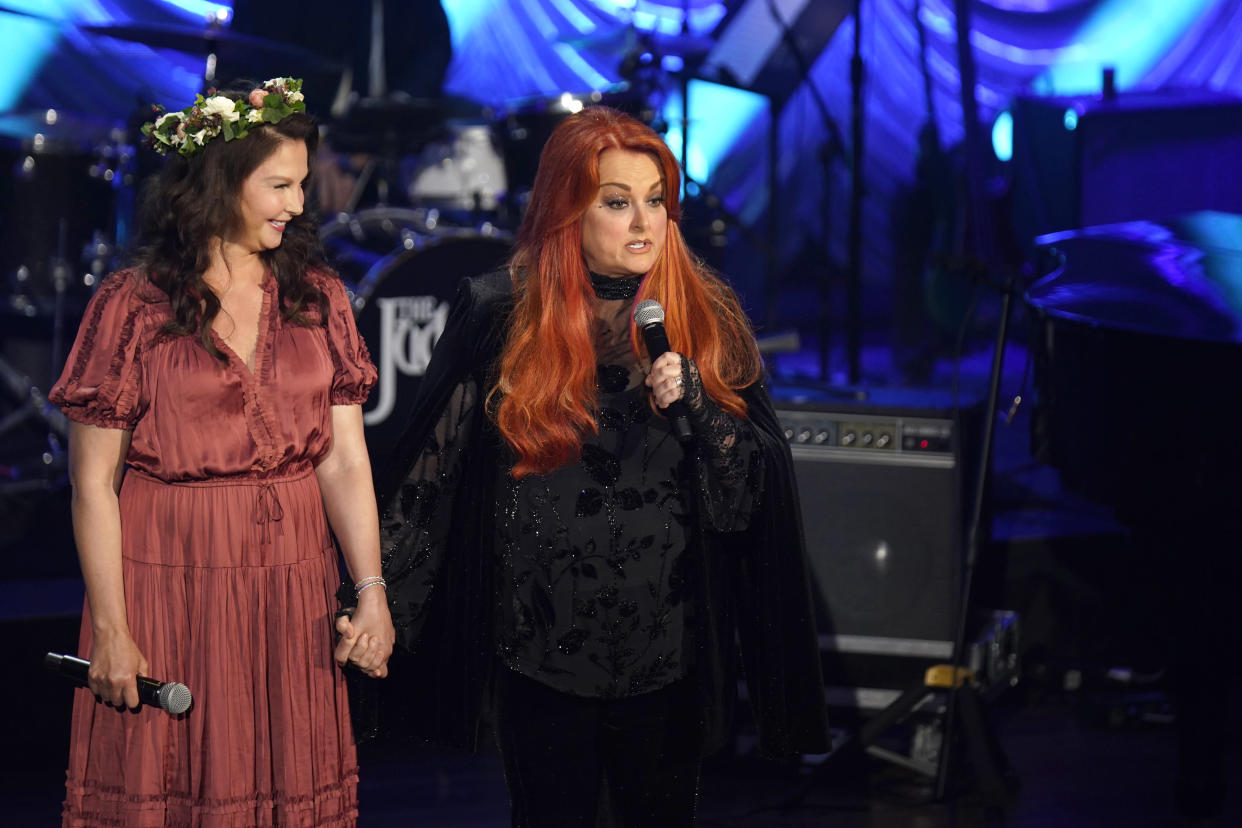 "I am the last person in this family — and if Ashley was here, I'd hope she'd agree with me — who knows stuff like this," she said. "I'm not savvy enough to go, 'I'm going to contest the will.' It never occurred to me."

Besides, Naomi's death has only made their bond deeper, said Wynonna of her half-sister. (Wynonna'a father is the late Charles Jordan while Ashley's dad is Michael Ciminella.)

"I feel like we're connected in a way that is so different because I'm an orphan," she said. "Both my parents are gone, and I'm relying on Ashley… We're vulnerable with each other, and we're tender. As sisters, we disagree on so much. But when it comes to our mother, we both look at each other and go, 'She was quite the character.'"

However, Wynonna acknowledged that the sisters had points of estrangement in their lives, "so we've missed out on a lot of time together." They've used a life coach to help them work on their relationship.

"Ashley and I are very different people, and we are learning that we have more in common than we don't," she said. "We've been able to work the process our life coach has given us: communication, compromise and compassion. In my disagreements with Ashley and Mom, I never gave up loving them, because I knew behind all that, there was someplace to meet and connect upon. I tell people: Try to find something that you have in common. Ashley and I, when it all goes to hell, can play cards and get along."

She added, "The relationship I have with my sister is the most powerful in my life."

After Naomi's shocking death, Wynonna decided to continue with the tour mother and daughter had planned. Ashley joined her sister on stage this week in a sweet moment. In an Instagram post, Ashley said they are "deeply united."

"Our walk with our sibling is often our longest relationship in life. I am incandescently blessed that this women has been my sister all my life," Ashley wrote on Instagram along with a video of them together on stage. "Deeply united after our mother’s painful death, we share grief and joy, poignancy and hope, and the absolute commitment to be of service to others. As during our long season of mourning we know ourselves and each other with greater tenderness and nuance, I am in awe of her vulnerability and power as she takes the stage to channel her voice for connection…"

The siblings are also united in a battle to keep investigation reports about Naomi's death sealed. It's currently being kicked around in the courts, with Tennessee’s state Supreme Court sending the case back to the lower Chancery Court for another hearing.

Ashley, who discovered Naomi — who battled mental illness — in the music legend's final moments, has said the "trauma of discovering and then holding her laboring body haunts my nights" in a plea to keep the investigation file private. Among the information that could be released are interviews conducted by police with Ashley and others "when we were at our most vulnerable" and Naomi's "profoundly intimate personal and medical information," the Double Jeopardy actress said in August.