It has long been believed that Princess Anne was staying out of the Prince Harry and Meghan Markle drama as a way to protect her mother, Queen Elizabeth. In fact, at her father Prince Philip’s funeral back in April, Anne was said to be cold toward Harry, according to the Daily Mail. “There is a deep sense of protection towards the Queen and resentment towards Harry. There is little sympathy for him after what he and Meghan [Markle] said on Oprah,” a source told the outlet. Many wondered then if Anne harbored any ill feelings toward Meghan, or if the two had ever been at odds.

In an interview with Express, royal expert Ingrid Seward said that Anne was staying out of things because it really wasn’t her business to get involved. “Anne has no need to get involved in the Harry and Meghan drama at all. Remember she is her father’s daughter and he frequently chooses to distance himself from issues he didn’t consider his business,” Seward told the outlet. And while that may very well be the case, it seems that Anne may have a bit of a soft spot when it comes to her nephew and his wife. Keep reading to find out more about Anne’s relationship with Meghan.

Princess Anne is sympathetic toward Prince Harry and Meghan Markle 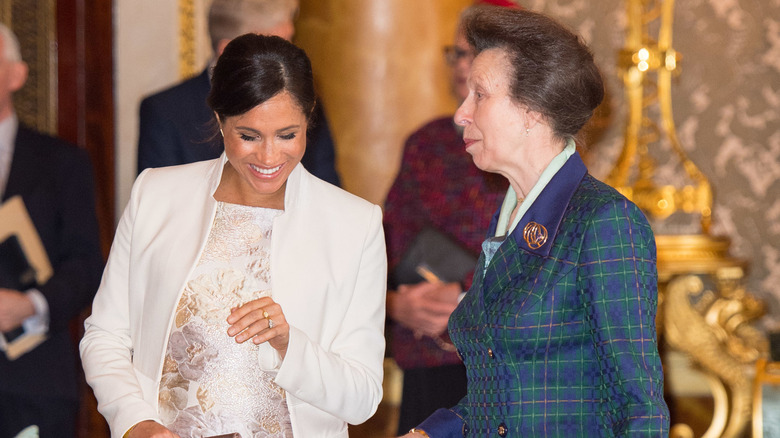 Robert Hardman conducted an interview with Princess Anne for a new documentary titled, “Princess Royal: Anne at 70.” After filming the interview, he spoke with Radio 4’s Today, according to Express. Hardman was asked if Anne had any “sympathy” for Prince Harry and Meghan Markle. “She does, and she talks about it,” he said. “She fully accepts that the media are especially interested in the new and young and glamorous and that does place added pressures and it’s not an easy role to play,” he added.

During her sit-down with Hardman, Anne expressed how she had to “clearly come to terms” with her role as the only daughter of the Queen of England. She seems to understand that there’s a lot of pressure on the royal family, which could be why she decided to allow her children a small bit of freedom when they were born. In an interview with Vanity Fair back in 2020, Anne opened up a bit about not giving her two kids, Peter and Zara HRH titles when they were born. “I think it was probably easier for them, and I think most people would argue that there are downsides to having titles. So I think that was probably the right thing to do,” Anne told the outlet. Given this, it seems as though Anne may be very understanding and sympathetic to Harry and Meghan’s situation.