Queen Elizabeth might be in her 90s, but that doesn’t mean that he doesn’t like to accessorize! In fact, the queen is almost always dressed to the nines, matching her dress coats to her hats, sporting a pearl necklace and a set of matching pearl earrings, and carrying a handbag to boot. According to People magazine, the queen is a big fan of her Launer handbags, which retail for more than $2,500, according to the designer’s website. Interestingly, the queen actually has a bit of a purse collection; Reader’s Digest reports that she owns upwards of 200 bags!

Back in 2011, People magazine reported that the queen actually uses her handbag to send secret messages to her staff. Evidently, if she moves her handbag from one arm to the other, she is looking for an exit plan. “It would be very worrying if you were talking to the Queen and saw the handbag move from one hand to the other,” royal historian Hugo Vickers told People at the time. “Someone would come along and say, ‘Sir, the Archbishop of Canterbury would very much like to meet you,'” Vickers explained. And while the queen’s bag may have a very important purpose, it’s actually filled with some very useful items, too. Keep reading to find out what the queen carries in her purse.

Queen Elizabeth carries some pretty normal things in her handbag 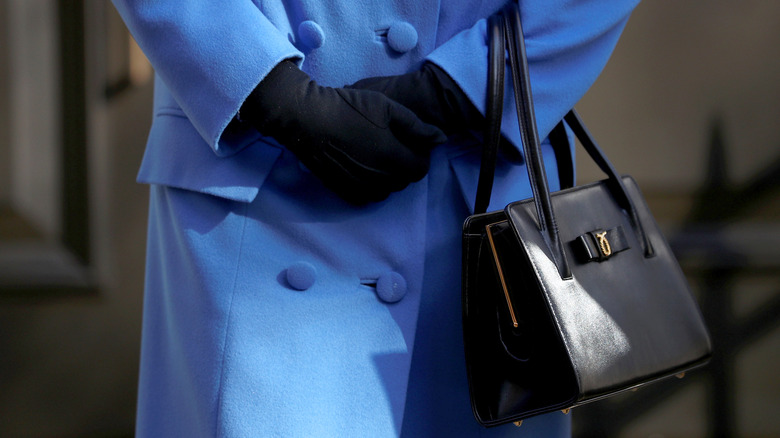 No, Queen Elizabeth isn’t carrying around a spare crown or some loose royal jewels in her purse. According to People magazine, the contents of the monarch’s handbag are actually pretty practical. The outlet pointed out six essential items that the queen carries with her at all times. The first notable item is a handkerchief, which comes in handy if the queen must sneeze or wipe her eyes or nose for some other reason. She also carries around a very special — and pricey — pen. The Parker 51 pen is said to cost about $75 — but it glides across paper like you wouldn’t believe!

People magazine also reported that the queen carries a case for her glasses, a bold lipstick for on-the-go touch-ups, some hand cream for those instances of dry skin, and some sort of candy. Her favorite? Bendicks, which are described as a “mint fondant covered in bitter dark chocolate.” The contents of the queen’s handbag isn’t unlike that of our mothers and grandmothers — add in some hand sanitizer, a pack of gum, a pair of AirPods, and some loose change, and we’re basically twinning with QEII.