The innovative recording artist, known for buzzy hit songs like “After the Storm” and this summer’s inescapable hit “Telepatia,” has officially entered the fashion world with her new clothing line, Bodied by Uchis. The brand’s debut offering—a collection of early aughts-inspired jeans dubbed Obsesión Denim—was entirely produced in Colombia by local denim artisans and inspired by Colombiana street style. It includes Uchis’s own take on levanta cola denim, a Colombian-engineered silhouette that, for lack of a better phrase, makes the butt looks unbelievable.

She continues, “The line is very ’90s, early 2000s. That’s an aesthetic I’ve always loved because I’m a ’90s baby—’94! And as for levanta colas, Colombians invented this engineering of denim technology that incorporates spandex and elastane, so it really just lifts your butt and makes it look very round and perky.”

Levanta cola jeans have been a part of Uchis’s wardrobe since childhood, when she would bring back pairs from Colombia for her friends at school. She says that creating a line that features jeans, which are a style essential for Colombians, is a way to highlight the that Latinos also inherently take part in setting fashion trends—whether the industry wants to admit it or not.

“Part of my mission as an artist, since I’m Colombian, I’ve always wanted people to just see that there’s so much more to Colombia than just the stereotypical things,” Uchis says. “Cocaine and coffee are usually the exports people are always talking about from Colombia, but they don’t talk about the fact that we invented culture. We invented this denim engineering that’s utilized by so many brands now.

“I want to start a brand that’s 100 percent made in Columbia, that’s ethical and eco-friendly, with my personal take. I want it to be super limited; I don’t want to make anything mass-produced. The launches will always be limited, and then never sold again,” she shares. (In other words, there are more silhouettes set to come–including unisex pieces.)

The singer says that her first offering took inspiration not only from early millennium fashion, but also the women—famous and not—who shaped her personal style.

“I’ve always been inspired by really strong women like Grace Jones—and Shakira, too, who obviously as a Colombian woman brought Colombia to the mainstream,” Uchis says. “In regards to fashion, I think of my own aunts. My aunt kind of raised me like a mom, and she was always so put together, and that’s just what I grew up looking up to. I was more so in tune with, like, my masculine energy when I was little, and it took me a while to really get comfortable with my femininity. I used to always just look at her as such a goddess.” 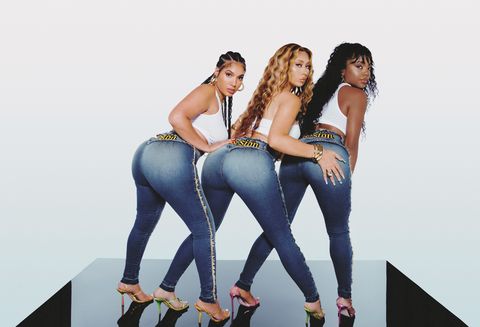 The line inherently acknowledges that being Latina isn’t a monolithic experience and there’s no such thing as just one sole Latina body type. The singer also wants to do away with excessive European influence when it comes to Latinx-owned clothing lines and embrace trends that could be seen every day on the streets of Bogotá rather than in a storefront in Madrid.

“For a long time, people would look at Latinas and couldn’t acknowledge that not all of us are curvy or have a certain shape—Latinos come in every shape and every color, and I feel like that’s something that people are still learning about now,” Uchis says. “I also feel like people have always kind of looked at us as tacky or that we aren’t very fashionable—even in Latin America. We always want things that were European and things that were from Spain—society always made it like we were below [Europe], along with our style, our fashion, and everything else.”

The singer adds, “It’s almost like our own version of self-hate in a way when we don’t embrace our own styles. But in reality, we invented styles. We’re juicy! And lots of people want to be like us now. Since the beginning of me becoming an artist, I have been so proud of showing my heritage and all of the beautiful parts of our fashion and culture.”

Ultimately, says Uchis, her clothing line—like all of her artistic endeavors—will always center around “putting respect on Latin America and Colombia’s name,” as well as embracing the cultural assets the Latina community were long ridiculed for.

“It’s all about being true to [Latina] style—that’s the true focus,” she says. “Plus, I don’t know anybody who doesn’t want their butt to look good in their pants, you know?”