Covid lockdowns made Britons think LESS about other people and their future, study claims

Covid lockdowns may have caused Britons to think less about their future and other people, scientists say.

Academics found ‘significant changes’ in people’s daily thought patterns, which was linked to the drastic change in routine.

Draconian stay-at-home measures adopted to thwart the virus forced millions to stay inside, only leaving their home to exercise and shop for food.

It also effectively cut their socialising, leading to isolation and drove up anxiety and depression levels.

The new research, by York University, is the first to document the ‘systemic changes’ that occurred during the unprecedented restrictions.

Scientists sent five texts a day for a week to 113 people before the pandemic struck, asking them about what they were thinking.

The same texts were sent to a similar group of 82 people during the first lockdown, which came into force on March 23.

Messages were studied to identify common patterns of thought under the different conditions, as well as among younger and older groups. 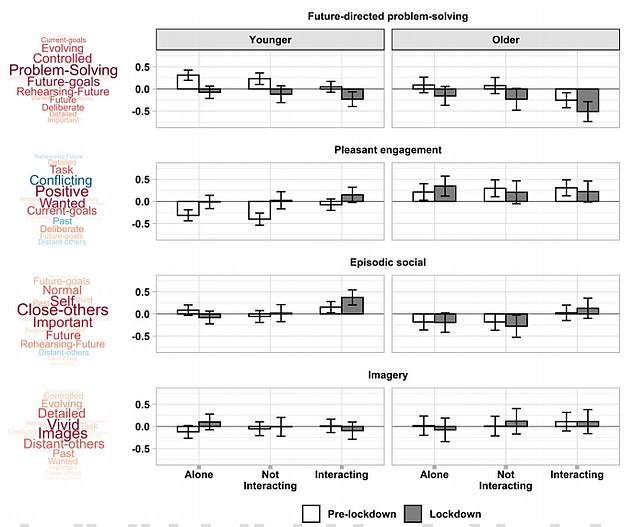 The graph compares the prevalence of thoughts pre-lockdown (white) and during the first lockdown (grey), across younger people (left) and older people (right). The words on the left represent each thought pattern. It shows the most notable changes in how people think were recorded in a decline in thoughts about the future (top line) and thinking about others (third line)

People thought less about the future under strict Covid restrictions, unless they were doing more work, researchers found.

The first Covid lockdown in England and Wales did not trigger a spike in suicides, official data revealed last week.

Office for National Statistics (ONS) figures showed there were 1,603 suicides in the two countries between April and July 2020 — fewer than the number for the same time period in any of the previous five years.

Statisticians said the fall in suicides was driven by lower rates in men.

Experts said the latest data was ‘very reassuring’ that there was no spike in suicides during the first wave of the pandemic.

They have previously suggested the drop could be down to ‘genuine social cohesion’ from people coming together to fight Covid, and a sense at the time that the crisis would soon pass.

The figures also dispute warnings that the draconian restrictions would inevitably lead to a surge in people taking their own lives.

Thinking about the future and setting goals is ‘important for mental health’, the team wrote in the journal Proceedings of the National Academy of Sciences.

So reduced job opportunities may add to negative emotional changes that occurred during lockdowns, they added.

Messages from the volunteers also showed that when they were alone, they thought about other people much less than they did before lockdown.

But on rare occasions when they did interact with others, they actually thought more about others than before lockdown.

The researchers noted that their study did not take into account that other factors – such as fear of illness and bereavements – impacted people’s ongoing thoughts.

But their findings suggest that changes to socialisation levels and opportunities for work are ‘important contributors’ to how lockdowns affect people’s thoughts in daily life.

Brontë McKeown, lead author, said: ‘Normally, people spend a lot of time thinking about other people and planning for the future in their daily lives.

‘We found that both of these thought patterns were disrupted during lockdown.’

Dr Giulia Poerio, co-author from the University of Essex, claimed that people have anecdotally reported changes in aspects of their thoughts due to the pandemic, such as what they are thinking about most or their dreams.

But this study is ‘the first to actually document the systematic changes that have occurred in thinking patterns during this unprecedented time’, she said.

Dr Poerio added: ‘Our findings are exciting because they show how important our external environment and social interactions are for shaping what is going on internally.

‘And [they] suggest changing our external world could be one way of changing the (mal)adaptive thought patterns that make up so much of our waking lives.’