Cairo: President Vladimir Putin of Russia likes to cast himself as the leader of a global movement rising up against domination by the United States and its allies.

On Sunday, his top diplomat brought that message directly to Africa, hoping to turn the hunger and social strife across the continent to Russia’s advantage.

He is likely to find a receptive audience. 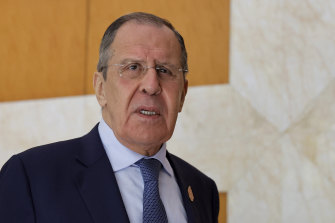 Even before setting out on his four-country tour, Foreign Minister Sergey V. Lavrov made clear he would use the trip to blame the West for the grain shortages tied to the war in Ukraine that are raising fears of famine in African countries and to paint Russia as the continent’s faithful ally.

Ahead of the trip, Russia acquiesced to an agreement that allows Ukraine to resume exporting critically needed grain that has been blocked in Black Sea ports by the fighting, a sign of Putin’s apparent concern for public opinion across the developing world.

The global food crisis is expected to figure prominently in Lavrov’s trip to Egypt, Ethiopia, Uganda and the Republic of Congo. But while the grain shortages were set off by the Russian invasion, the foreign minister suggested that Moscow was not the problem.

“We know that the African colleagues do not approve of the undisguised attempts of the US and their European satellites to gain the upper hand, and to impose a unipolar world order to the international community,” he wrote in an article published in newspapers in the four countries he was to visit.

Since the invasion of Ukraine in February, governments in Africa and in the Middle East have found themselves caught in the middle.

Pressed by the West to condemn the invasion, these governments also seek to maintain access to Russian grain and other exports and to preserve friendly ties with Russia that in some cases date back to the Soviet era. Seeing no gain in alienating either side, some have tried to simply not take sides in the conflict. 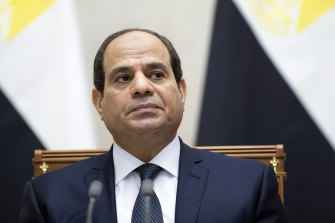 For his part, Egypt’s president, Abdel-Fattah el-Sissi, has refused to condemn Moscow as strongly as the US wanted. And on Sunday, after meeting with Lavrov, the Egyptian foreign minister, Sameh Shoukry, had warm words for his counterpart.

Egyptian-Russian relations “are historical, characterised by friendship and branched out into many fields politically, economically and culturally,” Shoukry declared at a news conference.

“We look forward to further close cooperation based on mutual respect and shared interest,” he said.

“We have reiterated the Russian grain exporters’ adherence to their commitments,” he said at a joint news conference with Shoukry, adding that Russia and Egypt had a “common understanding concerning the causes of the grain crisis”.

Western nations, too, have waged a concerted campaign in the region, trying to keep countries from getting too close to Russia. Ahead of Lavrov’s visit Sunday, Western diplomats in Cairo lobbied Egypt behind the scenes not to give the Russian minister too warm a reception.

The American special envoy for the Horn of Africa, Mike Hammer, was also set to visit the region starting on Sunday, with plans to travel to Egypt, the United Arab Emirates and Ethiopia for talks. The same day, the US Embassy in Cairo reminded reporters in a news release that President Joe Biden had pledged $US50 million for Egypt to help offset the rapid rise in prices of wheat and other staple foods set off by Russia’s invasion of Ukraine.

But Western attempts at counter-programming, including editorials and social media posts, have done little to attract more public support in the Middle East. Russian disinformation and propaganda have found fertile ground in a region where many Arabs have long harboured anti-American and anti-Western sentiment stemming from the US invasion of Iraq and Western support for Israel.

For months, the United States, Britain and the European Union have tried to turn the argument in their favour by laying the responsibility for the soaring price of bread and other basic foods squarely at Putin’s feet, roundly condemning Russia for shutting down the flow of Ukrainian grain to the world through the Black Sea.

On Friday, Russia agreed to a deal brokered by the United Nations and Turkey that would allow Ukraine to export its grain. The next morning, however, Russian missiles hit the port of Odesa, raising questions about whether the deal might collapse.

Samantha Power, administrator of the US Agency for International Development, said in a video posted Saturday from Kenya, where she was travelling, that the Odesa attack was “just the latest indication of the cold indifference Vladimir Putin has for the cost of the war in Ukraine, a man-made war that he created for no reason.”

Ukraine, for its part, said the arrangement was still on. Oksana Markarova, Ukraine’s ambassador to the United States, told CBS’ Face the Nation on Sunday that Ukraine would do everything possible “to feed the world.” The strikes on Odesa, Markarova said, demonstrated that Russia was not operating in good faith. “Our farmers are even planting and harvesting under the fire,” she said.

In March, el-Sissi called Putin to reaffirm Egypt’s commitment to cooperation after it voted in favour of a United Nations resolution to condemn the invasion. And last month, he gave a speech at the St. Petersburg International Economic Forum in Russia.

Elsewhere on the African continent, public opinion has appeared to waver between support for Ukraine and sympathy with Russia’s justification of its invasion.

While few African leaders have publicly supported Russia, no African countries have joined the American and European sanctions against Moscow. That balancing act was apparent last month when the head of the African Union, President Macky Sall of Senegal, met with Putin.

Sall implored Putin to free up the trapped Ukrainian grain — but he also echoed Moscow’s argument that Western sanctions had worsened the food crisis, explicitly calling for lifting restrictions on exports of Russian wheat and fertiliser.

Though the sanctions do not cover those commodities, shipping companies, insurers, banks and other businesses have been reluctant to do business with Russia for fear of breaking the rules or harming their reputations.

In his article ahead of the trip to Africa, Lavrov praised African leaders for resisting Western pressure to join the sanctions against Russia. “Such an independent path deserves deep respect,” he wrote.

Putin has traded heavily on his theme of Russia as leading a worldwide uprising against Western hegemony. Again and again, he has repeatedly described the Americans and their European allies as a “golden billion.” They live well, he says, at the expense of the rest of the world.

That argument is likely to resonate with many Arabs and Africans who resent the West’s long history of meddling in their affairs and extracting their resources.

“Why should this golden billion, which is only part of the global population, dominate everyone else and enforce its rules of conduct that are based on the illusion of exceptionalism?” Putin said Wednesday at a forum in Moscow. “It mainly got to where it is by robbing other peoples in Asia and Africa.”

This article originally appeared in The New York Times.