London: Northern Ireland’s health minister is suing Van Morrison after the singer called him “very dangerous” for his handling of coronavirus restrictions.

The Belfast-born singer opposes restrictions to curb the spread of the virus, and has released several songs criticising lockdowns.

He denounced Northern Ireland Health Minister Robin Swann during a gathering at Belfast’s Europa Hotel in June after a Morrison concert was cancelled at the last minute because of virus restrictions. 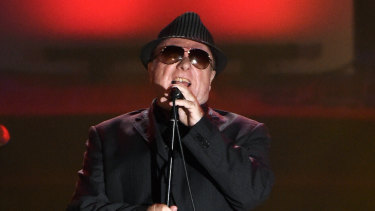 The defamation suit relates to three incidents in which Morrison criticised Swann, calling him “a fraud” and “very dangerous”.

Swann’s lawyer, Paul Tweed, said proceedings “are at an advanced stage with an anticipated hearing date early in 2022.”

The lawsuit was first reported in the Sunday Life newspaper.

Morrison’s lawyer, Joe Rice, said the singer would contest the claim. He said Morrison will argue “that the words used by him related to a matter of public interest and constituted fair comment”.

In August, Morrison’s solicitor said the singer was disappointed by the Northern Ireland’s government failure to “engage with him” and that he was forced to bring legal proceedings “in order to achieve the lifting of the ban on live music for the benefit of fellow musicians, performers, [and] the live music sector as a whole”.

In September, Morrison said that “for some reason, completely unknown to me, [the ban] remained in force in Northern Ireland with catastrophic consequences…”

“As we look to the future, we need to understand the plan and strategy to support the arts and live music sector going forward as ultimately this helps support society as a whole.“

“It’s concerning that such considerations appear to have been forgotten.”