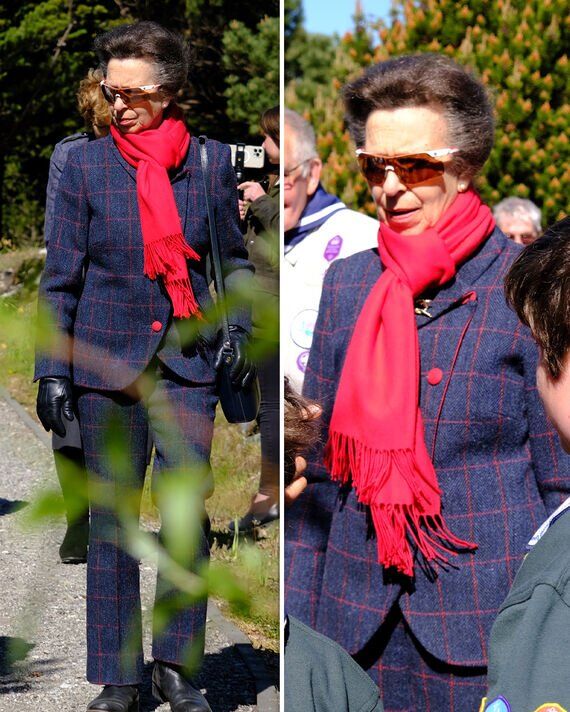 Her jacket had a subtle collar and bright red buttons running down its centre.

Her slim-fit trousers featured the same blue and red checkered print and looked great on her.

The Princess is a fan of trouser suits and wears them frequently, often in neutral hues. This one she wore in the Falklands on Monday was one of her bolder suits.

Anne combined the suit with a bright red scarf that matched the red of her outfit.

Last but not least, she accessorised with her iconic sunglasses, which fans have commented on in the past, describing them as “stylish”. Meanwhile, other royal watchers have found them to look rather amusing on the Princess.

One Twitter user, @w_coast_bluesey, previously wrote: “Her glasses crack me up, respectfully.”

However, royal fan Sarah Delore said: “Sunglasses on point, as per.”

Sarah has also written on social media in the past: “Princess Anne is living her life to the full in those sunglasses.”

Anne also wore tiny pearl earrings on Monday, as well as a gold brooch in the shape of a knot, which was pinned to her jacket’s collar.

The Princess Royal’s hair was pinned back in its usual updo, and she wore minimal make-up.

Some royal fans commented on Anne’s visit, as well as her look. User @Chelsea20185 wrote: “The GOAT couple of the Royal Family.”

Over the weekend, Anne and her husband laid a wreath at the 1982 Liberation Memorial in Port Stanley to mark the 40th anniversary of the end of the Falklands War.

For the occasion, she donned a long purple coat with a matching purple dress underneath, as well as black boots.

The royal was also carrying a black handbag, her favourite sunglasses and wore a purple and navy scarf. A gold brooch in the shape of a flower finished the Princess’ sophisticated look.

Princess Anne has worn the coat on other occasions, including when she and Queen Elizabeth attended an event together to celebrate the Royal British Legion’s landmark milestone.

Back then, she opted for the same wool coat with contrasting lapel detailing, which she wore over a simple dress, just like today. Princess Anne completed the look with a hat boasting ribbon and feather embellishment in purple.