UGG is celebrating International Women’s Day in a very cool way. The Southern California–based footwear company has tapped Meena Harris, the founder of Phenomenal, a social-conscious label known for its slogan tees, for a campaign titled #POWEREDBYHER.

In one image, Harris sits atop a white car wearing a fitted Kelly green suit, ball drop earrings, and, of course, UGG’s Fluff Yeah Slides in apple green. The blazer-and-trouser combo perfectly reflects Harris’s MO: suave and totally in control (a real boss), but also fun and approachable. In the wake of the pandemic, however, her personal style went through some adjustments.

“For me, home style, for the most part, has come to mean Zoom style,” she tells BAZAAR.com. “I’m basically living in Phenomenal tees and sweatshirts. There aren’t a lot of real pants happening—or as someone on Twitter called them, ‘hard pants’—and If I’m trying to motivate myself to exercise, I will put on workout leggings first thing in the morning.” 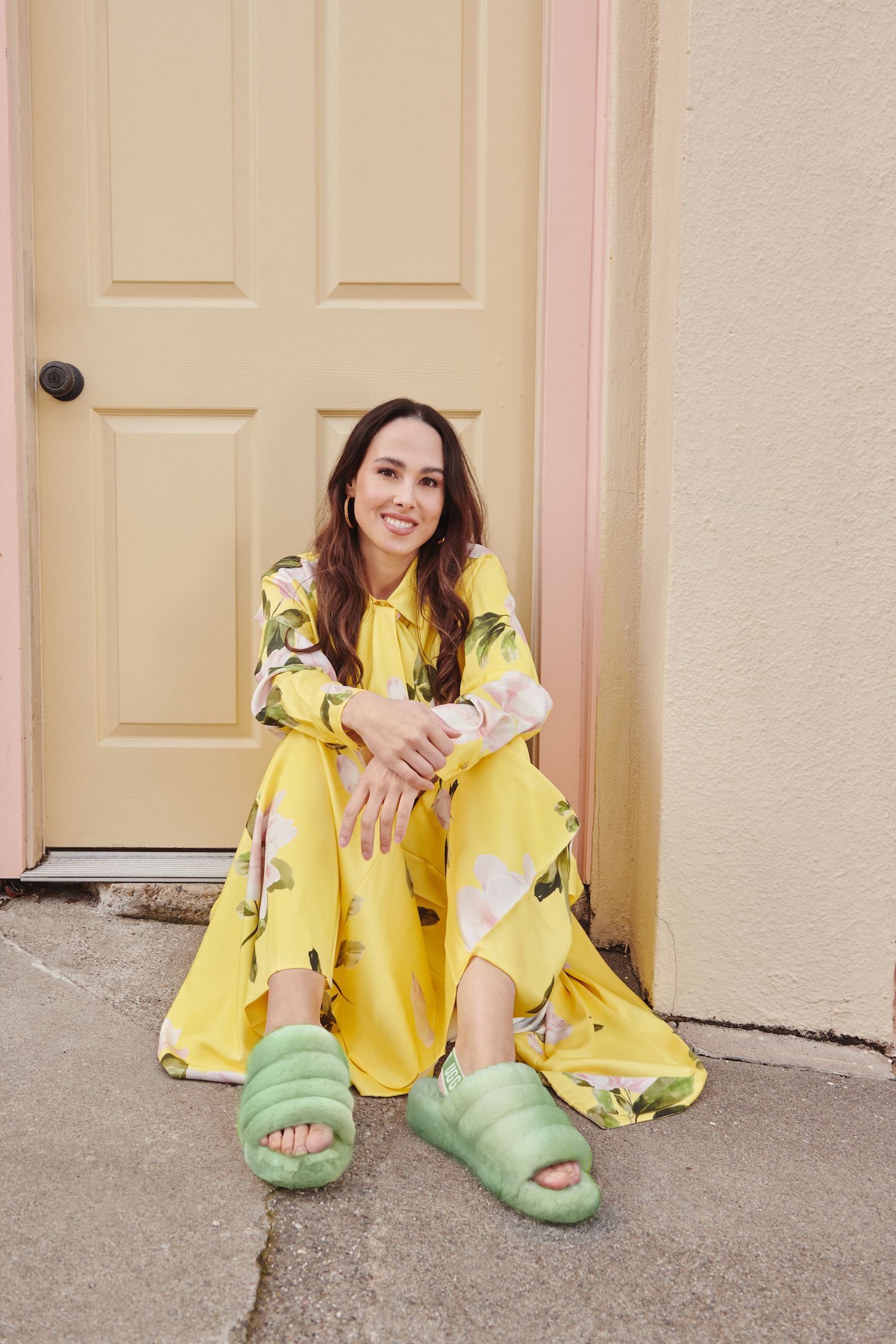 Harris also cites muumuu-style house frocks by Mara Hoffman and the famous Nap Dress by Hill House Home. But when it comes to professional scenarios, she understands that it is paramount to dress up for the occasion—even if it is virtual. “If I need to look more polished, that usually means a nice top or even a blazer,” she says. “Lately, I’ve been adding statement earrings to make things a little more interesting. It’s now been an entire year of Zoom fatigue, and I feel like I needed to spice things up a bit.”

Throughout 2020 (and now into 2021), Harris has had to perform a juggling act: educate her two daughters at home, run her business remotely through digital channels, and deal with the emotions that come with living through a health crisis. Not only that, but she released a children’s book, Ambitious Girl, and was further ushered into the limelight when her aunt, Kamala Harris, was sworn in as the first female U.S. vice president. All this is a lot to handle, and still, she manages to do it all. She is acutely aware that many mothers across the globe—albeit sans public notoriety—are going through the same motions.

“If anything, the pandemic’s disparate impact on women—who are by and large bearing the brunt of childcare and are more prone to leave the workforce than men, even though men are obviously also stuck at home—has underscored why International Women’s Day is so important,” she explains. “So I intend to celebrate it, this year, the way I always do: by celebrating fierce, phenomenal women and girls who are using their voices and activism to lift up other women, many in the midst of incredibly difficult circumstances.” 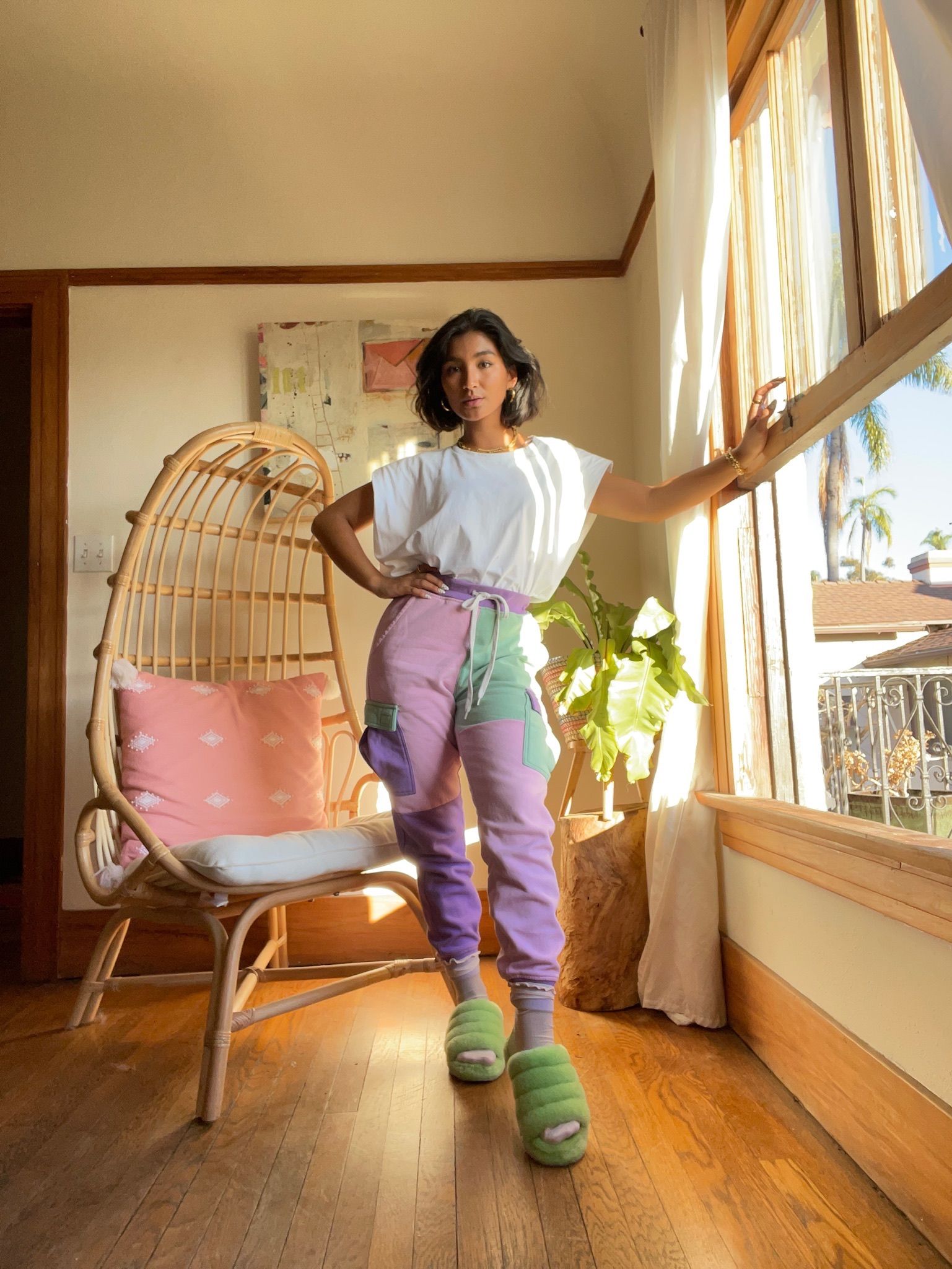 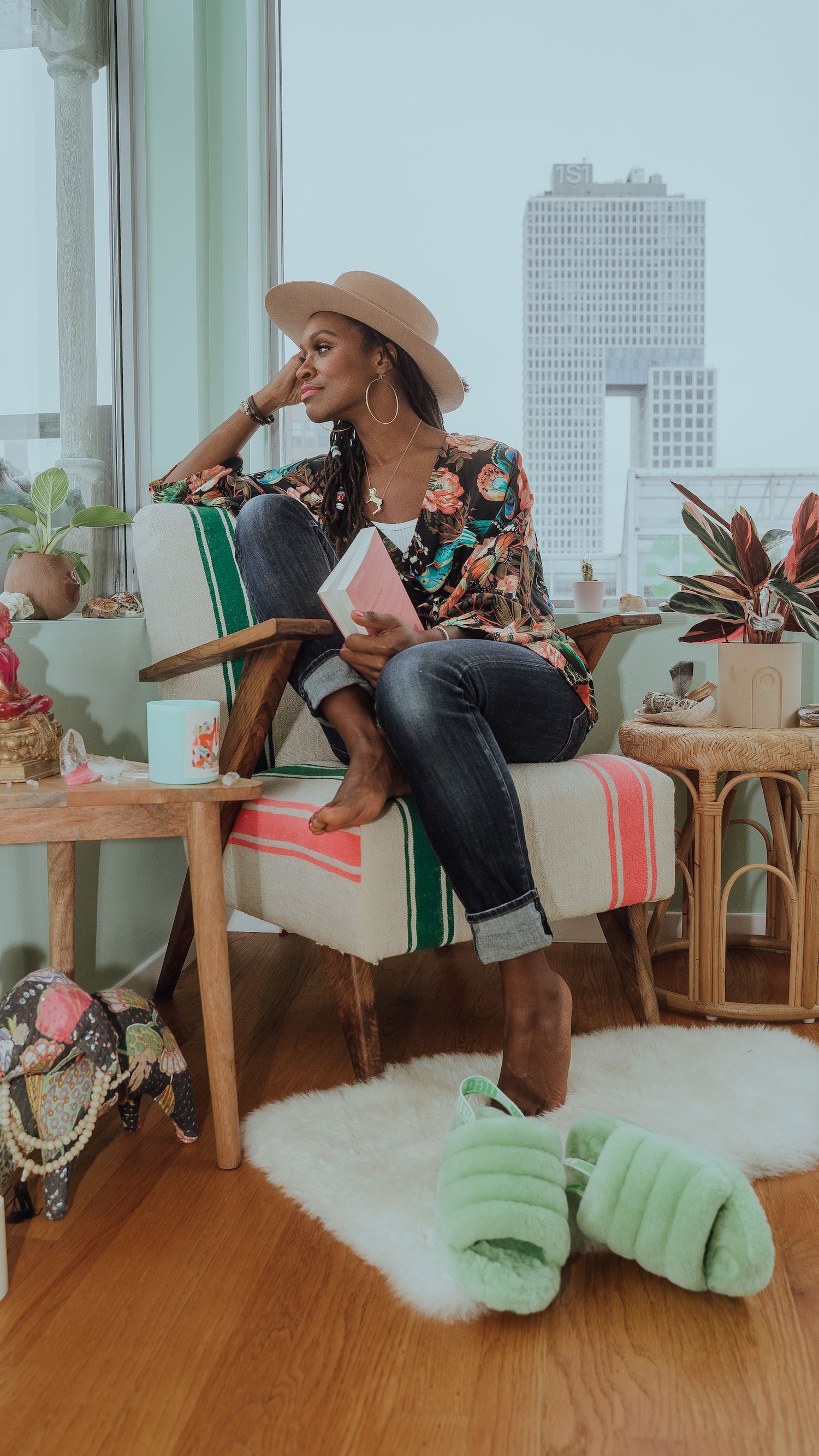 For the #POWEREDBYHER campaign, Harris picked four women who fully reflect this sentiment. They include Deja Foxx, the 20-year-old activist and founder of GenZ Girl Gang; Latham Thomas, a doula and maternity lifestyle expert who “is transforming the dialogue around Black maternal health and wellness with her movement to promote understanding about how women give birth,” as Harris says; Liz Plank, the award-winning journalist and CEO of Liz Plank Productions who uses her platform to tell stories that don’t often get heard; and Thando Dlomo, a digital associate at Entertainment Tonight and one of the first alumna of the Oprah Winfrey Leadership Academy for Girls. “I wanted to lift up these women, because I’m so, so inspired by the way each of them, in their own unique way, is raising her voice and using her power to make a difference,” expresses Harris.

In addition to highlighting these women on its website and social media channels, UGG is also partnering with HERproject. “It’s an important global initiative that works with brands, suppliers, and NGOs to support low-income women working in global supply chains,” Harris explains. “They’re making a real impact.” Through March 14, the brand will donate $25 of every pair of Fluff Yeah Slides in the apple color to the organization, guaranteeing a minimum donation of $50,000. 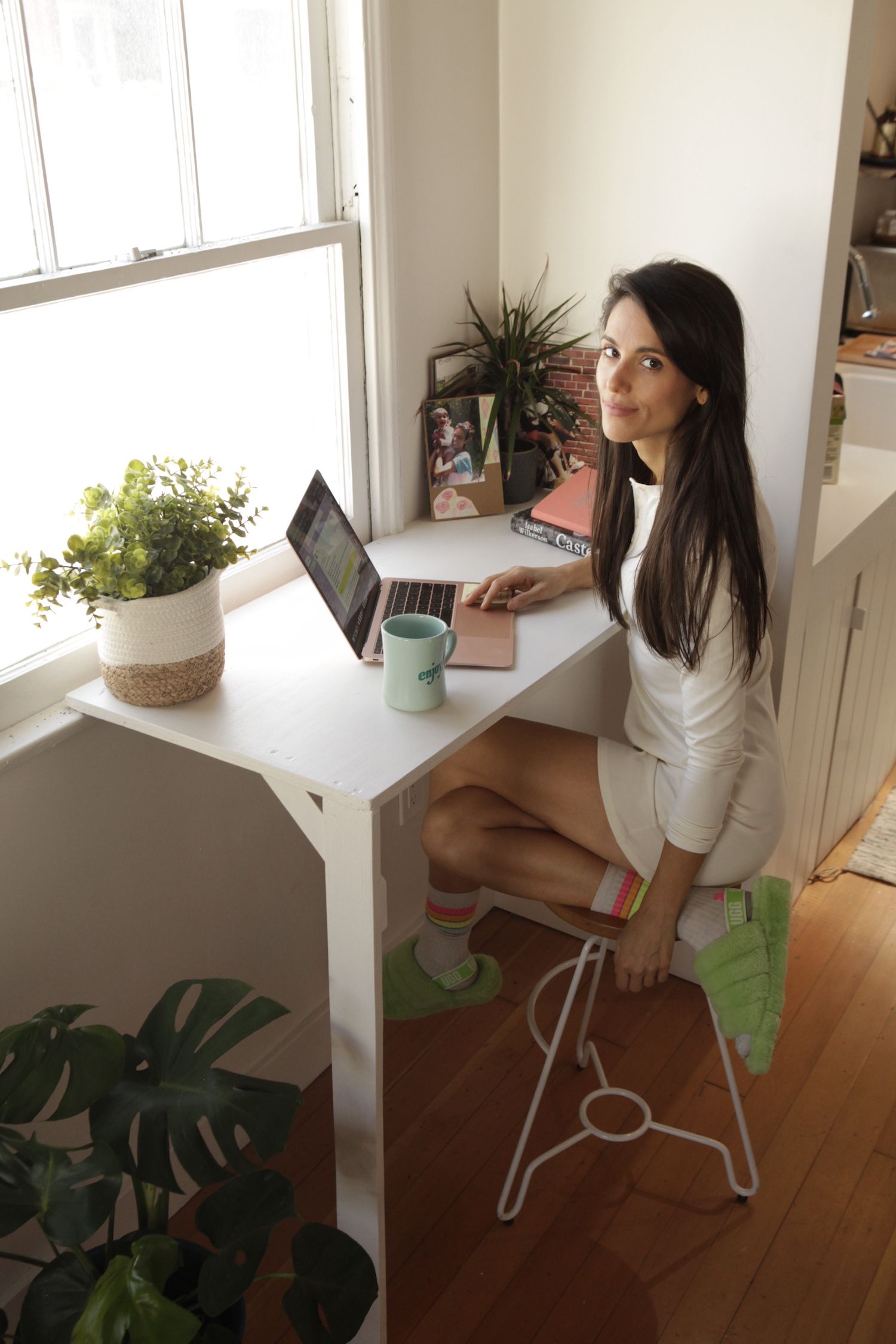 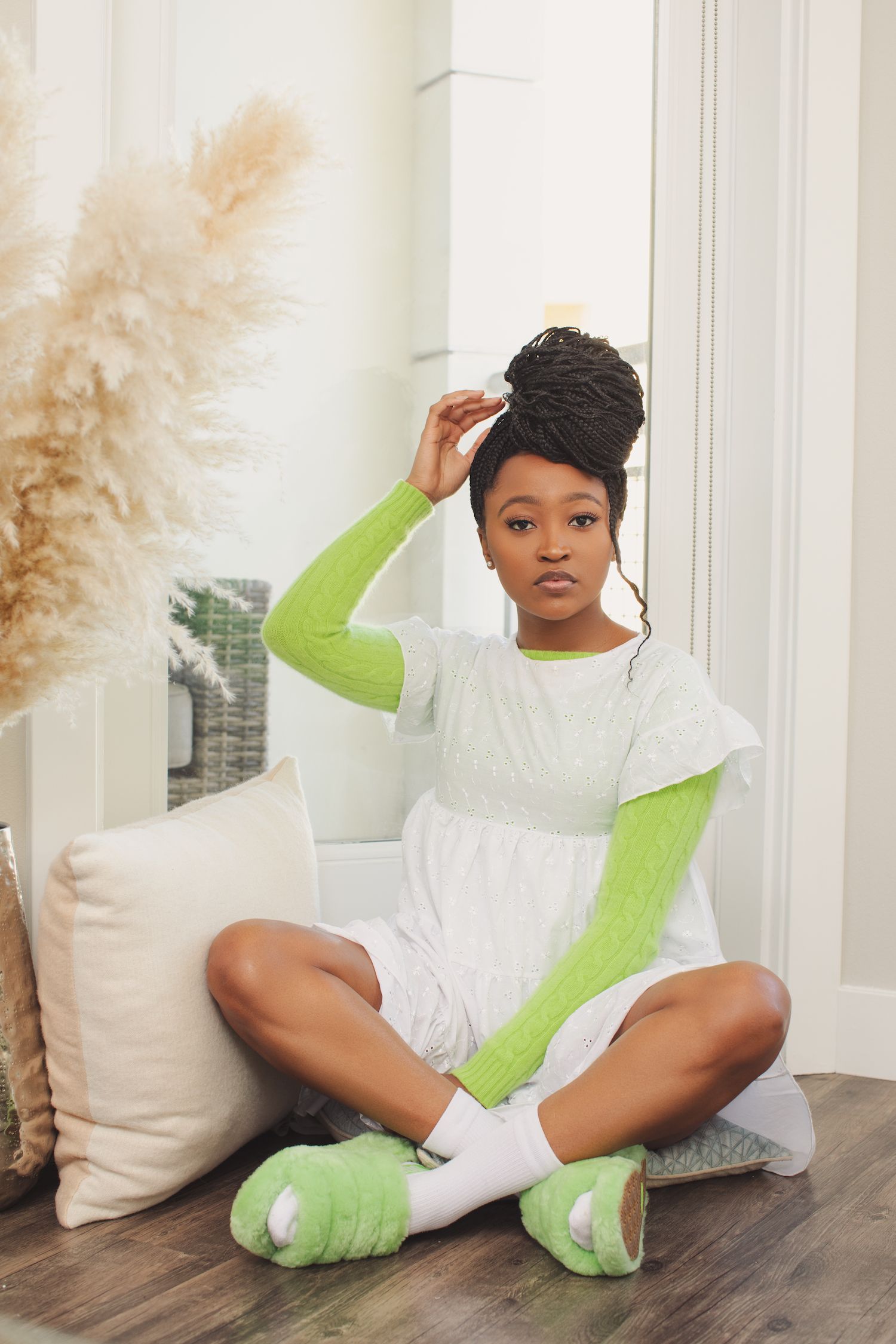 Giving back, even by the smallest measure, can truly go a long way. Indeed, Harris has built her Phenomenal brand around this ethos. As she says, “My personal motto is, ‘No one can do everything, but everyone can do something.’ If you focus on the difference you can make, even at a microscopic level, right now, you never know where it will take you.”