Darien Monk doesn’t wish a broken espresso machine on anybody, but once upon a time she wouldn’t have minded if the ones at the Coffee & Tea Exchange in Chicago, where she works, were out of order a little more often.

“I would see Shane every once in a while at the store, and I thought he was cute,” said Ms. Monk, 43, of Shane Gerdes, an espresso machine repair technician. They met in 2007, when he was hired to work at the company warehouse across town. Espresso emergencies happen only so often. Crushes sometimes can’t wait.

So when Ms. Monk told a co-worker about her attraction to Mr. Gerdes, 42, he promptly invited them both to a local bar. Then he sat them down together and left. Sparks flew. Within a year, they were living together in a new Chicago apartment, where they let a dozen years pass without much talk of marriage. “I’m a little shy, and essentially it felt like we were married anyway,” Ms. Monk said.

Mr. Gerdes was OK with that arrangement until the coronavirus pandemic hit. “When quarantine started, I just had this feeling that I wanted to protect Darien, to make her feel safe,” he said. Legalizing their relationship seemed a move in that direction. On Memorial Day 2020, he took her to the Lincoln Park Zoo, the site of what they consider their first official date in 2007, and proposed.

“Shane had made a picnic,” Ms. Monk said. “Normally he doesn’t do any cooking besides frozen pizza, but he made us PB&J sandwiches and borrowed all this picnic stuff from a neighbor. It was very sweet.” When he presented her with a ring on the picnic blanket and asked her to marry him, she said yes. 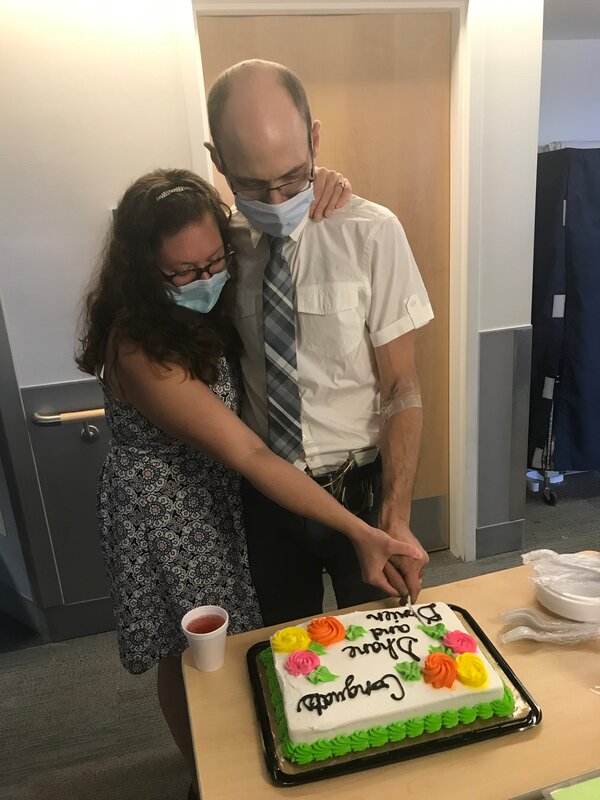 Neither was in a hurry to set a wedding date. “I absolutely didn’t want to do anything until the virus was over,” Ms. Monk said. That would change Dec. 11, when Mr. Gerdes started feeling dizzy while at the warehouse fixing espresso machines. He fell to the floor in a seizure and was rushed to a hospital in Oak Park, Ill. Ms. Monk got a call from the ambulance. “I stood outside the hospital for hours, but they wouldn’t let me in because of Covid rules.”

Within a day, doctors found a brain tumor. “I saw my X-ray,” Mr. Gerdes said. “The tumor was huge, on my memory lobe. When you see something like that and they tell you it’s growing inside your skull, it’s terrifying. I didn’t know whether I would live or die.” What he did know is he didn’t want to wait a minute longer to marry Ms. Monk.

On the morning of Dec. 13, the day before his brain surgery was scheduled, he called her at home. “He woke me up,” she said. “He said, do you want to come down here and marry me?” She pulled a dress from her closet and hurried to Rush University Medical Center, where a team of nurses had assembled a makeshift wedding chapel, with flowers and a wedding cake, in the hallway of the neuroscience intensive care unit. Doug Schlesser, a minister through the Universal Life Church and the husband of a Rush nurse, married them before 20 cheering medical staffers.

Mr. Gerdes, who made it through his surgery the next day and is awaiting further diagnosis, was elated to have pulled off the seat-of-the-pants wedding his caregivers were eager to orchestrate.

“I know it sounds morbid, but I love Darien and I wanted her to have my 401(k) and every other legal right in case I died,” he said. “I look like Frankenstein now — you can see where they drilled my skull — but I’m strengthened. I’m in a scrum and I’m going to beat this thing. I want to be with Darien and see her hair grow gray.”