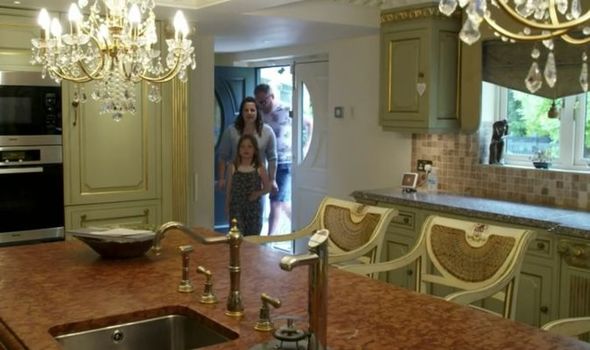 Ampika Pickston was shocked as she had to swap lives with a farming family based outside of Newcastle upon Tyne. The reality TV star gained her wealth from a weight loss program and her business training people to do non-surgical beauty treatments.

Ampika lives in a six bedroom mansion with a heated pool outside Manchester.

Her luxury lifestyle includes 80 handbags, 200 shoes and a £1,000 a month electricity bill as her heated pool guzzles energy.

The former reality star said “you don’t need to feel guilty” after spending when you’ve earned your money.

She said about the environment: “The only thing I think about when you talk about green is green handbags or green shoes.”

The Wild family were this week’s Rich House, Poor House “poor house” contestants. The family had two children and had remortgaged their house to buy a small farm.

After the couple “got a mortgage on a big piece of grass” they started running the farm seven days a week and “devoted all their time and money” to it.

Although their plan was to make money from the produce, the couple had yet to start a business from their chickens, pigs and vegetables.

The eco-friendly family had a budget of £167 a week and lived in a three bedroom ex-council house.

With Ampika’s weekly budget of £1,480 per month, the Wild family were free to enjoy her pool and a skiing trip.

However, viewers reacted with shock on Twitter to the family being classed as living in a “poor house”.

One viewer tweeted: “Are you having a laugh, don’t see any poor house on my tv.”

The Wild family said they lived on £25,000 per year which the show said would place them in the bottom 10 percent of the country.

Another viewer tweeted: “Hardly poor owning land, a house and having £167 disposable income.”

Someone else was shocked as they tweeted: “I’ve seen ‘poor people’, they have nothing and have to rely on food banks. These people are not poor, they are average.”

On a shopping trip with Ampika’s budget, the Wild children each had £100 to spend on whatever they liked.

The family visited a charity shop and bought a big box of second hand lego as well as a second hand dress.

Viewers said they felt cheated by the programme with one tweeting: “I feel robbed! The poor family are hardly poor with a disposable budget of over £600 per month. Worst episode ever!”

Rich House, Poor House fans were also unimpressed by the family’s budgeting. One tweeted: “Now I’m all for being green, but it’s the family’s choice to be in the percentage of lower earners with looking after the farm.”

However, another viewer disagreed as they found the show’s eco tips very enlightening.

They tweeted:” This is a great episode, lots of educational stuff in it.”

At the end of the show, the Wild family decided to spend “more time with the kids” and “try not to work on the farm every day of the week.” They said they would “make the business work” with Ampika’s social media tips.

Ampika decided to change her electricity guzzling ways and said: “Here’s to being a green goddess.”