Bill Gates’ youngest daughter Phoebe, 19, is trolled with racial abuse after sharing Instagram photo of her black ‘boyfriend’ kissing her on the cheek

Billionaire Microsoft founder Bill Gates’ teenage daughter Phoebe is being trolled with vile racist abuse after sharing a sweet Instagram snap of herself being kissed on the cheek by her rumored black boyfriend.

The 19-year-old Stanford University student posted the candid image on her Instagram Stories on Wednesday, and within minutes, social media was being flooded with crude comments about the alleged relationship.

In the snap, Phoebe – who is the youngest child of Bill, 66, and his ex-wife Melinda, 57 – is seen leaning in towards the unnamed man, while he is pictured kissing her sweetly on the cheek.

The unidentified beau appears to have a pair of binoculars in his hands as he plants a peck on Phoebe’s cheek – while what appears to be a tent can be seen in the background.

Phoebe’s brunette locks hang loose around her shoulders and she looks to be wrapped up in a brown blanket as she shared a tender moment with her so-called boyfriend – who is wearing a T-shirt from rapper Drake’s fashion line, October’s Very Own (OVO). 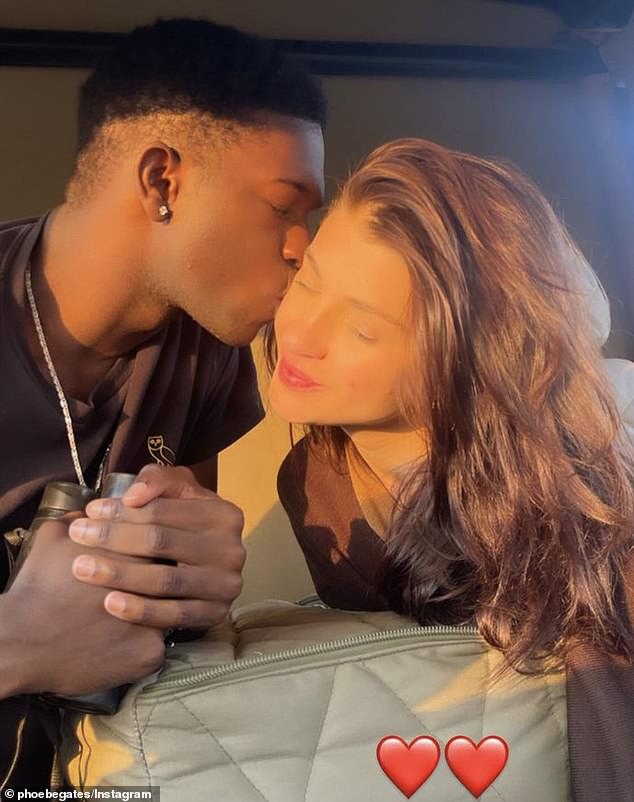 Bill Gates’ daughter Phoebe, 19, is being trolled with racist abuse after sharing an image of herself being kissed on the cheek by an unnamed black man 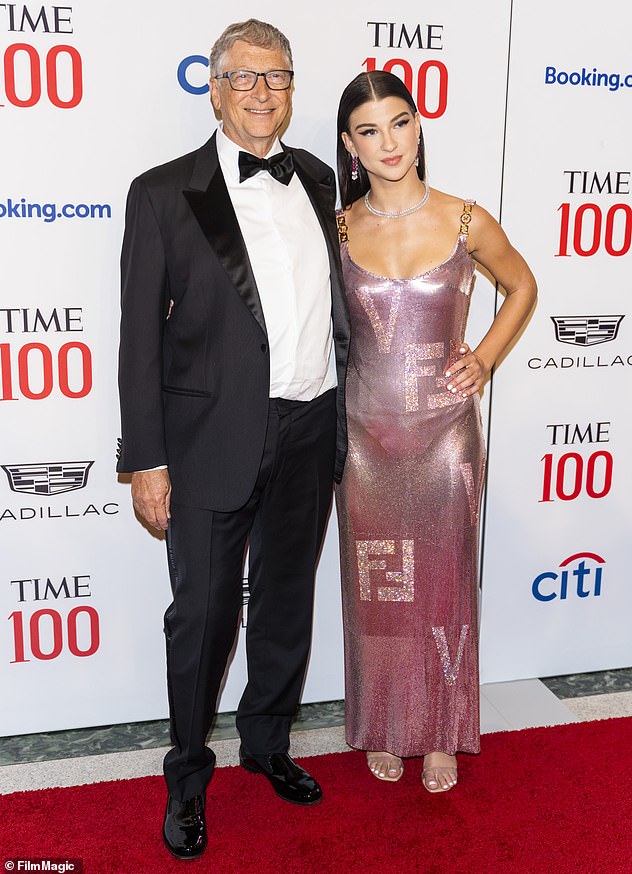 The teenager (pictured with billionaire Microsoft founder Bill in June), who is due to start her sophomore year at Stanford University, posted the image on her Instagram Stories

Despite the innocent nature of the photo, Twitter was quick to react to the notion that Phoebe might be dating a black man, with many choosing to make crude jokes suggesting that her rumored beau is simply using her for her father’s money.

Another chimed in: ‘Phoebe Gates has a black boyfriend, young brotha do not pull out … BE GREAT.’

‘When Phoebe Gates’ boyfriend get added to the joint checking acct,’ one person added, while sharing a video of a black man doing a celebratory dance.

Someone else tweeted a video of a black man waving a gun around while swerving his car across a road, writing: ‘Phoebe Gates and her boyfriend pulling up to Bill Gates’ house for Thanksgiving.’

After the image was reposted on Instagram, dozens of other people chimed in with racist commentary, with one person writing: ‘This was the dream MLK spoke about.’

‘Bill about to smash a vase against the wall,’ someone else commented.

‘Bro become a millionaire in a matter of seconds,’ another person wrote, as one Instagram user added: ‘Now we know why Bill Gates been tellin his kids they ain’t gon inherit s**t,’ referring to Bill’s previous revelation that he will not leave the majority of his wealth to his children.

The billionaire – who is one of the richest men in the world with an estimated net worth of $123.7 billion – announced at a TED conference in Canada in 2014 that he will instead leave most of his fortune to his family’s foundation.

However that hasn’t stopped social media users from making sordid suggestions about Phoebe’s rumored new romance – with several urging the unnamed suitor to ‘get her pregnant’, while others joked that he has ‘secured the bag’.

‘He getting his reparations LMAO,’ another wrote.

The controversy comes just weeks after Phoebe spoke out to condemn the Supreme Court’s reversal of Roe v. Wade in a series of Instagram posts, which she began sharing just days before the overturning of the law was announced.

At the time, Phoebe shared a series of photos of herself in a white bikini, while proudly declaring: ‘I’m not shy about my body and/or telling you to keep your bans off of it.’

‘Every person deserves access to sexual and reproductive health care,’ she continued. ‘Right now, the Supreme Court is prepared to end the constitutional right to abortion. Join me and the fashion community to send a clear message.’

In the photo, she is wearing a string halter bikini while leaning against a wall with her hands behind her back. Her dark hair is loose around her shoulders, and she is looking at the camera with a piercing gaze.

The words ‘my body, my choice’ were written in white and pink on the bottom left side of the snapshot. 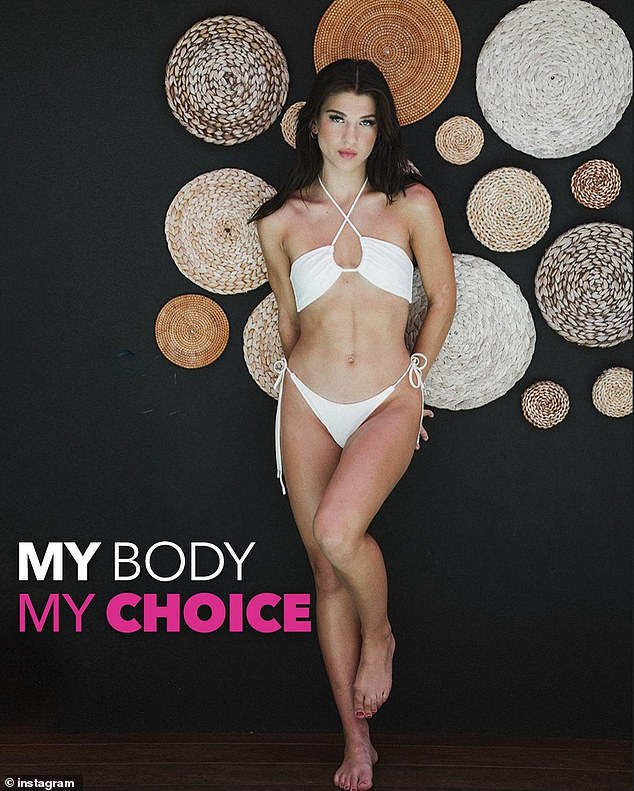 The controversy over her Instagram photo comes just weeks after she spoke out to condemn the Supreme Court’s reversal of Roe v. Wade in a series of posts featuring herself in a bikini 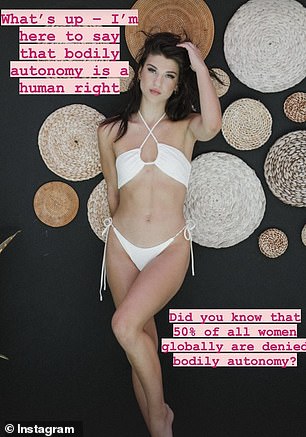 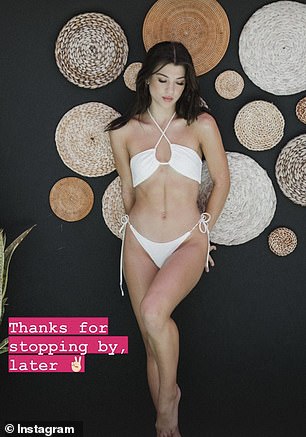 Phoebe posted several bikini-clad images of herself, while sharing her thoughts on ‘bodily autonomy’ and urging SCOTUS to ‘keep your bans off [my body]

Thousands of people liked the post, including her 26-year-old sister, Jennifer Gates. The sisters also have a 23-year-old brother, Rory.

Phoebe also shared the image on her Instagram Stories, writing, ‘What’s up — I’m here to say that bodily autonomy is a human right. Did you know that 50% of all women are denied bodily autonomy?’

The next slide, which was featured in her post, was a graphic from BansOff.org showing which 26 states will move to ban abortion if Roe v. Wade is overturned.

‘Now that I have your attention…THIS!’ she added.

The following graphic offered information on how people combat the potential ban, including donating to abortion funds and supporting a local Planned Parenthood.

Phoebe concluded her Instagram Stories with a second bikini photo, writing, ‘Thanks for stopping by, later.’