John Howard says Scott Morrison’s internal Coalition critics are “consumed” by personal grievances but agreed that Liberal Party members should choose their candidates, amid fury over how the Prime Minister and his allies have controlled preselections for the coming election.

The former prime minister also suggested whoever forms government in May should consider major tax reform as the country still relied “far too heavily” on income tax compared to indirect taxes such as his goods and services tax. 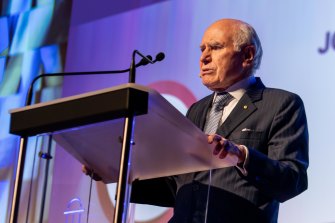 John Howard speaking at the Property Council’s annual congress in Hobart on Wednesday.

Mr Howard told the Herald and The Age that Mr Morrison may be “forceful” but he was not a bully as Liberal senator Concetta Fierravanti-Wells labelled him in a stunning budget night attack, and said he did not deserve criticism for his religion.

The NSW senator – who was dumped from the Liberal Senate ticket ahead of the election – used a late-night parliamentary speech to call Mr Morrison “an autocrat and a bully with no moral compass”, and said he was not fit for the top job.

She also claimed he “used his so-called faith as a marketing advantage” and was untrustworthy.

Forced to respond to the scathing remarks during several media appearances to sell his fourth budget as Prime Minister, Mr Morrison said the senator was understandably disappointed about losing preselection, but she should pursue her grievances through party processes. 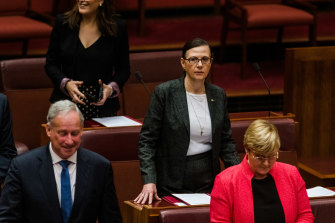 “I join a long list of those that she’s said these things about at times like this,” he told the ABC. “She’s been very critical of the government and my predecessors as well.”

Mr Howard denied Mr Morrison had an “image problem” heading into the election despite the scathing assessments of his character that have emerged from colleagues including Deputy Prime Minister Barnaby Joyce and now Senator Fierravanti-Wells.

“Both of them were probably consumed by personal disappointment and frustration when they made those remarks,” Mr Howard said in an interview on the sidelines of a Property Council conference in Hobart.

“I haven’t seen any evidence that [Mr Morrison] is a bully, that he’s arrogant or any of that. Forceful? Well, anybody who gets to be the leader of a political party is forceful.”

But Mr Howard said he strongly believed party members should choose candidates for lower and upper house seats through plebiscites – rather than installing candidates by head office factional deals, as is happening in several key NSW seats.

Senator Fierravanti-Wells slammed this practice in her speech, saying Mr Morrison and his ally Alex Hawke “ruined the Liberal Party in NSW by trampling its constitution” and members’ rights.

A legal challenge to this process by an ally of Senator Fierravanti-Wells, NSW Liberal Party state executive member Matthew Camenzuli, is heading for the courts just days before Mr Morrison is expected to call the election.

“The jury is still out on whether the right selections have been made in seats. You won’t really know that until you’ve had the election.”

Mr Howard noted Senator Fierravanti-Wells lost her position as a result of the democratic plebiscites she advocates. “Connie’s had a good run. She lost and she was unhappy. What happened with her preselection produced a predictable reaction,” he said.

Mr Howard said he talked to Mr Morrison from time to time but would not be drawn on the agenda of a fourth-term Coalition government if re-elected. However, he told the Property Council event that tax reform was unfinished business and the country was still too reliant on income taxes.

“That is an issue that has to be addressed at some point in the future,” he said. “You won’t find an alternative [GST] rate passing my lips. The changes that were made to the package the public voted for in 1998 weakened it – taking food and other services out.

“Tax reform remains unfinished business in this country, you can’t pretend otherwise, and I just hope in one way or another at some time the government in power returns to it.”

Dealing with China and improving the bilateral relationship would continue to be a high priority for whoever is elected, he said, warning: “The idea of a potential Chinese base in the Solomon Islands … is bad news. We have to make every effort to neutralise it.”

Mr Howard, who oversaw 12 budgets as prime minister until 2007, said Tuesday’s effort by Treasurer Josh Frydenberg was a good marriage of politics and economics ahead of an election that would be difficult for the Coalition.

He said the government had a good story to tell, particularly regarding the low unemployment rate, but “the longer you’re in power the harder it is to win”.