A new exhibition in Melbourne immerses visitors in the creative genius of Disney’s animated universe. What’s it like to experience? A father and daughter review the show.

Everyone knows Disney films from their childhood. How well you know them is brought home when you become a parent, and re-enter that world recalling lines and the songs from movies you haven’t seen in decades. 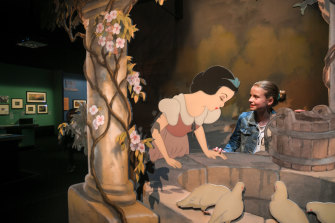 As a parent you also get introduced to – bombarded by? – all the new ones. After three daughters, I have strong opinions on which is the best rendering of Let It Go .

What’s remarkable is the effortlessness of the films doesn’t give the faintest hint of the effort involved. That’s probably the aim but it’s also the attraction of the Disney: The Magic of Animation exhibition. 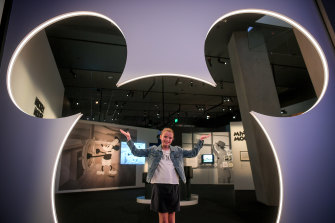 Scenes and songs are broken down, you see how they often began life as sketches from the pencil of a genius. The artistry of it all dawns as you walk through the galleries for each film. There are plaques “for kids” right the way through which are an excellent touch to start conversations when you’re looking at walls of picture frames.

For those who love the art there’s a trove to explore – pencil sketches, concept drawings, colour scripts.

For me, I loved the glimpses into the film-making challenges and the imagination in overcoming them. From the multi-plate camera that revolutionised depth in cartoons (think Pinocchio or Bambi) right through to the iGroom system Disney developed after being confronted with 500 different kinds of fur in Zootopia (banging soundtrack). Did you know that Cruella de Vil’s car was actually a physical model that they filmed and converted to cartoon?

It pays for grown-ups to pump the brakes as the kids run through the exhibit so you don’t miss little nuggets – I loved the small photograph of an artist on 101 Dalmatians sitting with pencil pinched over a pad in front of a chair filled with Dalmatian puppies.

For those like me who were also looking out for the backstory to the scenes we’ve watched on a loop, I could’ve had a bit more in the descriptive notes and video interviews explaining how famous scenes were put together. That said the tabletop backgrounder on Moana and a similar video about Raya were very interesting.

My kids, aged 8, 10 and 12, all loved it. I’m glad I left the 4-year-old at home, I think it might be a bit static for her. To stretch the experience I’d recommend bringing sketch pads and getting the kids to have a go at creating some of what they’re looking at. Overall a great way to spend an hour or two on a winter’s day.

On Thursday I went to Disney: The Magic of Animation. As soon as I stepped into that large Mickey Mouse head doorway I was immediately reminded of my 4-year-old sister and I watching Frozen.

I had no idea of the magic and secrets of how they made such memorable Disney flicks. With video clips, picture captions and photos we learned a lot about how amazing scenes were made.

Did you know that the candyland track in Wreck-It Ralph was a model?

The reason, I learned, is that they need the model to get an idea of what it would look like, so they used lots of lollies and cookies to make it for real. But do not eat it because it is now old and that would be gross!

I loved the Frozen part, as well as the Raya and the Last Dragon, Moana and the Jungle Book parts mainly because of the information and the way it was presented.

The colours, pictures and videos were mind-blowing because growing up I thought these were just movies I watched – but there is a lot more to it and that really stood out to me.

There is a special room where you can watch one of my personal favourite movies The Lion King and you see the walls change colour with the emotion of the story.

My little sister really liked the spinning wheels at the start because it helps you see how they make the characters move. My big brother thought the Jungle Book section was awesome because of the cool behind-the-scenes information. We all thought it was great.