After almost three miserable years of fear, heartbreak, separation, and a slingshot economy that’s gone from the brink of disaster to overheated abundance and now to uncertainty, it seems fitting that we’ve been going through an uninspiring and disturbingly nasty state election campaign.

Traumatic times produce extremes in human behaviour. Most people, when presented with the difficult and unexpected, accept reality and get on with things. Some even manage to behave magnificently. Others lose their bearings. Or maybe they never had them and the high emotions of the moment expose it. 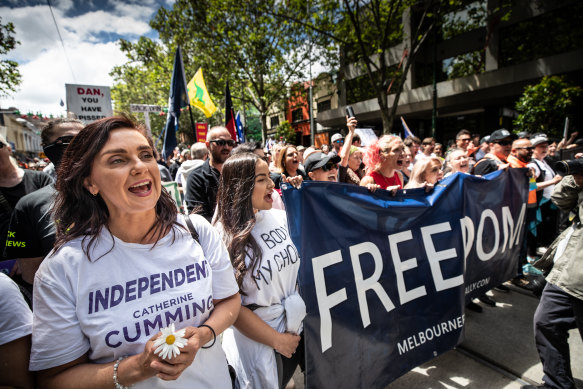 There’s been a mainstreaming of this stuff. The man the Liberal Party has put up to try to take Andrews’ seat of Mulgrave, Michael Piastrino, has said in a video that under a Coalition government Andrews “will be brought to justice for the murder of 800 people”. He later apologised for his “inappropriate language” – not for the characterisation of the Premier as a murderer, apparently, just the way he expressed it.

This is not altogether new. In 1990, then Labor premier John Cain was targeted by protesters furious about the loss of their savings due to the collapse of the Pyramid building society. At a rally outside state parliament, demonstrators chanted “kill Cain” and said they wanted to bring him down the parliamentary steps in a coffin. Protesters also gathered outside his Ivanhoe home.

I reported on this at the time and I don’t recall a public furore about the threats of violence, although I do know that Cain was understandably upset. Similarly, ahead of the 1996 federal election, there was no outcry when former Labor premier of Queensland Wayne Goss observed that voters in his home state were waiting on their verandahs with baseball bats with which to clobber the Keating government.

Last week, the ABC’s Michael Rowland used the same imagery to suggest to Andrews that many voters were looking to punish his government. Even though Rowland had said “figurative baseball bats”, that didn’t prevent a social media pile-on and a subsequent Twitter apology from the TV host.

These are days, simultaneously, of greater sensitivity and less restraint, making the political terrain more unruly. These are also times in which public trust in the big political parties and our political institutions is low and getting lower. Regrettably, the Labor and Liberal parties haven’t done much in this campaign to reduce the trust deficit.

None of this justifies the violent talk we’ve heard recently. But it would be good if the big parties did more to restore their standing. Watching the daily grind of announcements and promises of magical solutions – one-day wonders pushed aside to make way for the next one – has been a depressing experience. And then there have been the obfuscations.

Somehow, we’ve found ourselves with rival political leaders whose first instinct, when facing difficult questioning, is to dig in. Andrews operates at a low temperature, so he puts up the defences and the deadpan expression and runs down the clock. Matthew Guy has less self-control and alternates between super-serious and mild ridicule. The effect is the same: the sense that our politics are getting narrower.

This should not be surprising. The Labor Party in Victoria for more than two years now has been little more than a brand. Since federal intervention began in 2020, its dwindling number of rank-and-file members have had no say in its decisions. It is a completely top-down outfit run by the national executive, the premier’s office, and a small bunch of faction leaders.

The Liberals are also in a parlous condition. Its links to the wider community are poor and it’s clear that there’s been too little effort given to thwarting entryism by religious groups. Guy’s empty-handed explanation of the party’s oversight of its preselection processes is a bad look for someone who says he can run a state.

Overwhelmingly, there’s a feeling of desperation about this campaign. It begins with the rump of Andrews-haters who’ll never get over the lockdowns and vaccine mandates. It fans out to the Liberals, who’ve at times acted as a laundry service for wild anti-Andrews rumours and have made “put Labor last” their guiding principle. The latter tactic has led to a tit-for-tat between the Liberals and Labor about whether any Nazis are standing for parliament and, if so, whether they’re getting Liberal preferences.

And then to the government, which expects us to believe that Andrews really would stay for the full four years if Labor is re-elected, and that the health service really is going well. It’s not just the nasty words of a few fringe types that leave a nasty taste.