AUSTRALIAN rock star Michael Hutchence was found dead in a plush hotel suite in Sydney yesterday from an apparent suicide. He was 37. 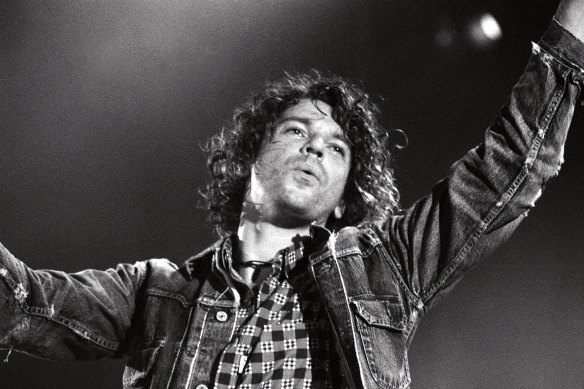 Michael Hutchence performs with INXS at the Hordern Pavilion in 1994.Credit:Michele Mossop

The INXS lead singer’s body was discovered amid a spray of prescription pills by a staff member in room 524 at the Ritz-Carlton around midday.

Police confirmed they had taken a belt for forensic testing amid reports the millionaire singer was found hanging from a door. No note was found. A post-mortem will be carried out tomorrow.

Close friends and family were mystified as to why Hutchence, who returned to Australia last week to prepare for the band’s scheduled Australian tour, might kill himself.

His father, Kel, said: “What can I say? I’ve lost my loving son.” Mr Hutchence had dined with his son before dropping him at The Ritz-Carlton, in Double Bay, about 10.30pm on Friday.

In London, Hutchence’s partner Paula Yates was woken in the early hours of the morning to receive the news. 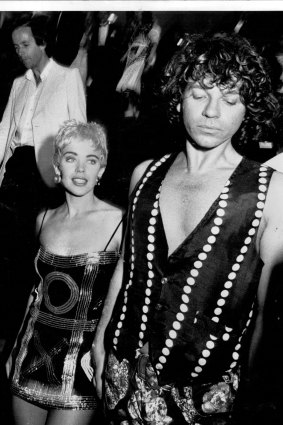 Michael Hutchence Escorts Kylie Minogue to the premiere of the Delinquents.Credit:Jack Atley

Hutchence’s lawyer, Mr Anthony Burton, told reporters outside the couples’ home that she was being comforted by a friend.

“Paula through a friend received this devastating news a short while ago and I ask that she be left alone with her family and her friends to enable her to absorb and cope with what has happened,” Mr Burton said.

Mr Burton said it was her intention to come to Australia as soon as possible and she will travel with her and Hutchence’s daughter.

Mr Burton asked the British media not to take photos of Ms Yates’ children, citing the new code of practice now in place in the United Kingdom following the death of Princess Diana.

Mr Burton arrived at the Chelsea house at 4.15 am and Ms Yates’ doctor arrived 15 minutes later.

Mr Burton said he had known the rock star for some time and was devastated. He said he had last spoken to Hutchence a few weeks ago and that he had seemed very happy.

Fellow band members were assembling for a rehearsal scheduled for 1 pm at the ABC studios in Gore Hill when his body was discovered.

Hutchence had arrived in Australia last week to prepare for the band’s ‘Elegantly Wasted’ tour.

Guests who shared a hotel lift with Hutchence said he had been in the hotel’s bar on Friday night. 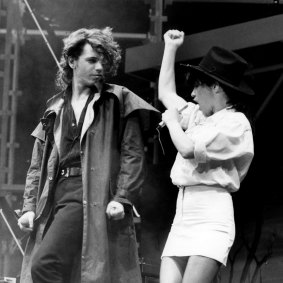 INXS had major hits in Australia early in its career with songs including ‘Burn For You’, ‘I Send A Message’ and ‘Don’t Change’.

The band sold more than 30 million albums and won Grammy and MTV awards. It also enjoyed major success in the United States.

IT BEGAN with a Perth pub band named the Farriss Brothers in 1977, pumping out rock’n’roll to sweaty young crowds.

In 1979, they moved to Sydney, changed their name to INXS and released their first single, ‘Just Keep Walking’. It has become one of Australia’s rock’n’roll anthems.

This was followed by a number of moderately successful singles and albums over the next two years until the release of their third album, ‘Shabooh Shoobah’, in late 1982, which saw INXS start to gain recognition internationally.

Then came ‘The Swing’, which featured the controversial single ‘Original Sin’, a song banned by many American radio stations because it described relationships between blacks and whites. This is seen by many, including the band members themselves, as their launching pad.

After ‘The Swing’ came ‘Listen Like Thieves’, ‘Kick’, ‘X’, ‘Full Moon Dirty Hearts’ and a swag of others. The rest, as they say, is history.

Dozens of top 10 hits over 20 years of performing to sell-out crowds around the world. Songs like ‘Need You Tonight’, ‘Don’t Change’ and ‘Devil Inside’ have become etched in Australian popular music culture.

INXS’s latest album, ‘Elegantly Wasted’, received only average reviews. The band was in Australia for a promotional tour.

Producing raw, pumping Australian rock’n’roll, with a lead singer oozing sex appeal, the members of INXS were firm friends and committed to making their unique style of music.

Even from the beginning, it seemed more a matter of when rather than if they would be a major success.

Fronted by the gangly Hutchence — Australia’s Mick Jagger and the late Jim Morrison rolled into one with shaggy hair, stubbled face and raunchy moves — the other five members had little chance of attracting much of the spotlight.

In the late 1980s, Hutchence began a relationship with Kylie Minogue, which led to Hutchence penning one of their biggest hits, ‘Suicide Blonde’.

While the rest of the band set about balancing their huge success with quiet family lives (Kirk Pengilly’s marriage to and divorce from Deni Hines being the only real blip on the graph), Hutchence took on the single-rock-star role with a vengeance — drugs, drinking, women and wild partying were all part of a day’s work. The star began spending most of his time away from Australia in the ’90s, much of it in London and Paris.

In 1992 he was listed in Business Review Weekly’ along with INXS guitarist/songwriter Andrew Farriss as having a combined wealth of $30 million.

In 1995, he began an affair with Bob Geldof’s wife, Paula Yates, with whom he had a daughter last year.