As the days get warmer, clothes become more vibrant, daring and revealing.

But an elegance coach has warned that many women are making themselves look ‘trashy’ by including these nine pieces in their spring wardrobe.

Anna Bey, who splits her time between London and Geneva, claimed in a recent YouTube video that crop tops paired with denim jeans are ‘too revealing’ for this time of year.

She added that ‘juvenile’ tie dye patterns should be ditched, as well as extreme cut-out ensembles and even Converse trainers because they fail to flatter and appear to shorten a woman’s legs rather than elongate them. 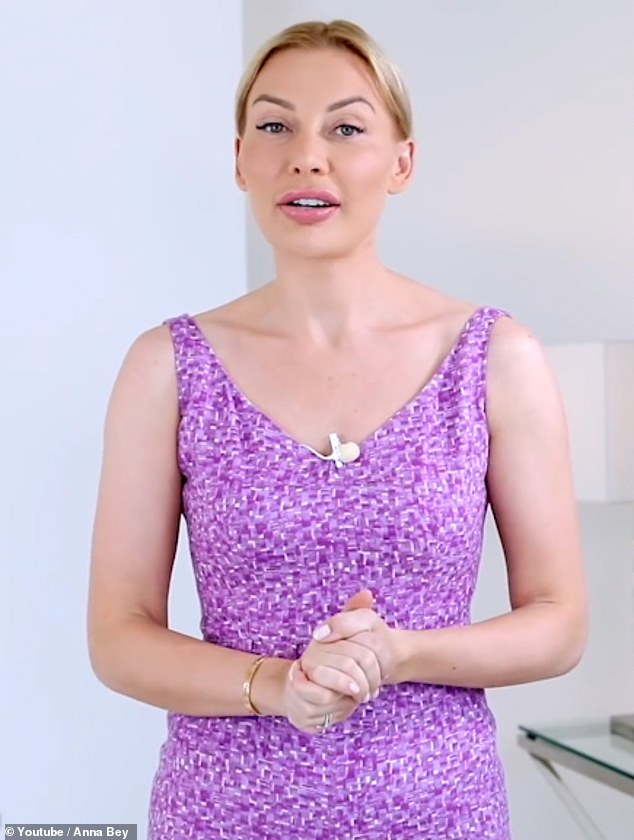 Anna Bey (pictured), who splits her time between London and Geneva, claimed in a recent YouTube video that crop tops paired with denim jeans are ‘too revealing’ for this time of year 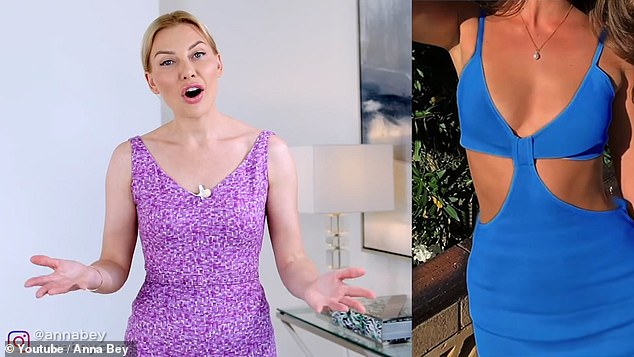 ‘I don’t think the cut-out trend (pictured right is one example) was created for the general public,’ insisted Anna (pictured left)

‘I don’t like tie dye as a pattern and I don’t think it’s going to elevate you whatsoever,’ Anna said.

It’s a very juvenile trend, but also just the trend that makes you look incredibly unsophisticated.’

‘And oftentimes, you have the cut-outs exactly where your love handles are, and it’s just not flattering.

‘But if the cut-outs are not necessarily there, but somewhere else, I feel definitely there are some nice looking dresses with cut-outs that you can absolutely wear and still be elegant.

‘But then there are many dresses that just take this trend a little bit too far when it looks quite tacky.’

‘I have been a plain Jane and I worked on moving away from that personal brand,’ explained the elegance coach.

‘Ladies, we work on elevating ourselves. We are more interested in elegant and sophisticated fashion, and we just don’t want to look like the regular plain Jane next door.

‘So if you avoid the cotton tank top, that’s going to give you a head start because this is a piece that definitely is very basic, very plain and does not have any elevated look to it whatsoever.

‘I do think that there’s a time and place for everything. Maybe it’s more suited for your activewear. Maybe you’re doing some really casual activities, but if you want to look more elegant, then the cotton tank top is not going to get you there.

‘You can, of course, change the fabric of the tank top. Maybe it’s a cashmere tank top, maybe it’s of another fabric that just feels a little bit more elevated, then it can definitely work.’ 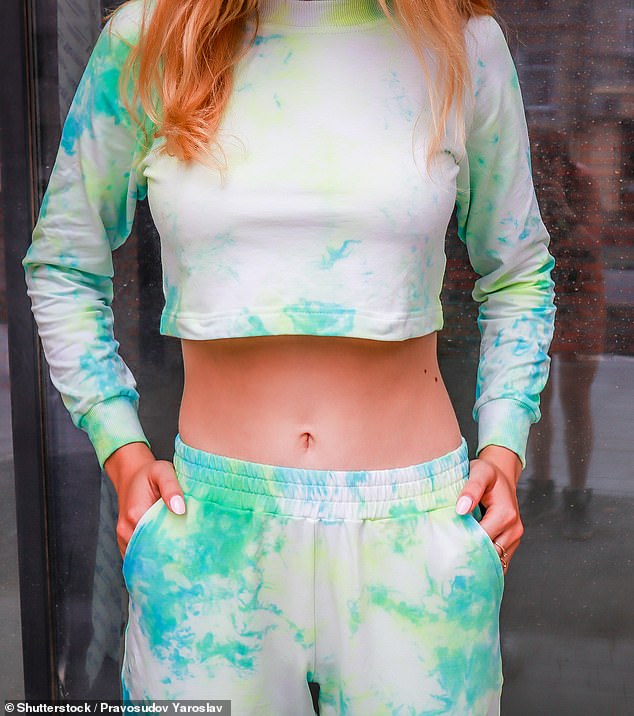 The elegance coach also suggested women shouldn’t be so eager to get out their summer wardrobe in spring.

‘Some ladies are a little bit too quick to pull out those summer clothes,’ she said. ‘I have seen some strange examples when ladies wear their July, August type of clothing, open toe sandals, light, short, and very minimal summer dresses, although it’s only the end of March or beginning of April.

‘The sun is starting to shine but this doesn’t mean it’s now time for summer clothes.’

The elegance coach explains: ‘Last year, when I went to Venice, I was spending the days observing bypassing people as they walked past.

‘I noticed that a majority of people or women were wearing the jean shorts and the crop top combo.

‘I personally don’t like this style because I think it’s too revealing. I think it shows too much skin. And, and I don’t like to get that intimate with people.

‘Maybe you have for a different opinion, maybe that suits your boat, but it doesn’t suit my ship.’

‘The Converse sneaker is considered to be a classic because unfortunately, it just never seems to go out of style,’ said Anna.

‘And it’s not only popular with the alternative community, it’s also popular with regular women, wearing them together with their jeans or casual trousers.

‘To me, they just look too casual and actually not really attractive.

‘And the reasons for that are quite simple. First of all, the Converse shoe, it cuts off your leg and it’s not flattering for anyone, unless you want to have an optical illusion of shorter legs.

‘It’s also incredibly uncomfortable,’ claimed Anna. ‘Have you ever felt the Converse shoe from the inside? It’s completely flat.’

‘It is difficult to make neon look expensive and elegant – and that’s because of the artificial nature of neon,’ said the elegance coach.

‘Neon is the opposite of classic, of minimal, of discreet. Instead, it’s loud, artificial and maybe a little bit weird as well, which of course doesn’t really belong to the elegant category.

‘I think that if you are someone who likes to be more flamboyant, but still elegant, you can definitely wear some form of neon.

‘What I would try and focus on then is to move away from the really [bright] neon, and maybe try a little bit more of a muted neon path.

‘That way you can wear these neon colours and be really bright and stand out and be flamboyant, but still it looks a little bit more collected and put together.’ 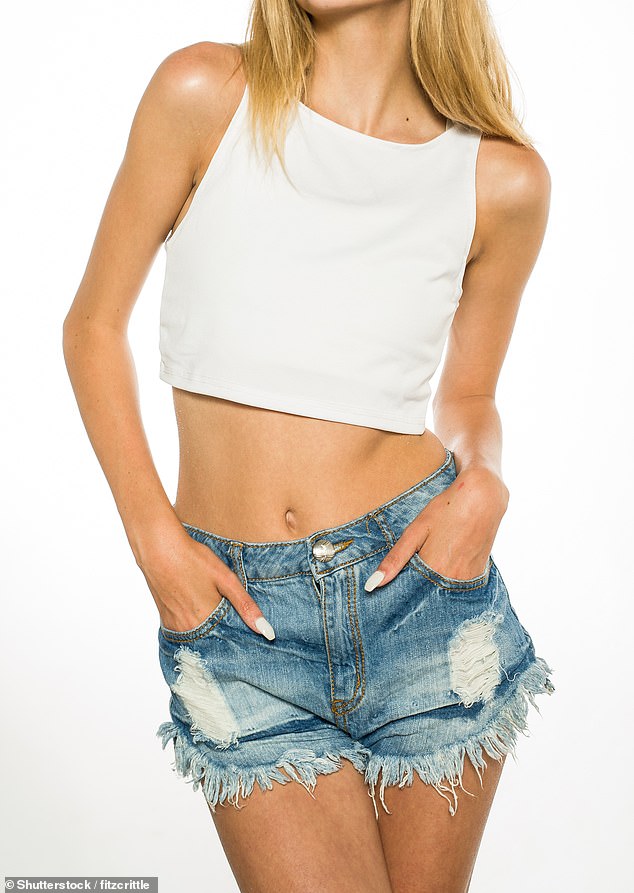 Anna, who splits her time between London and Geneva, claimed that crop tops paired with denim jeans are ‘too revealing’ for this time of year (stock photo)

‘From an elegant perspective, I find it hard to understand,’ she concluded.

Anna said: ‘I haven’t included this point ever before in my content, because I thought seriously it was a joke. But it’s been a trend since 2020, and it’s not a joke ladies.

‘So fashion people and influencers were dead serious when they introduced the visible thong trend. I keep seeing women wear it on the streets and I find it a little bit bizarre.

‘I think if you are striving for elegance, you have to definitely stay away from this trend because it’s definitely more on the tacky side. It’s also a very sexualized trend.

‘Now, people who support this visual thong trend and also who claim that all these sexual fashion trends are here because they’re empowering women to be able to wear whatever she wants so that she’s free as a bird, and nobody can judge her – this is not the point here.

‘We’re not here to judge the woman for wearing her thong outside of her trousers. My problem with this trend is who does it really benefit? I think it just benefits men. It just gives him a free peep show and that’s it,’ claimed the controversial elegance coach.