Tennis star Naomi Osaka ended her Olympic run by losing in a surprising upset. Beloved gymnastics GOAT Simone Biles took herself out of the hotly-anticipated team final after a mistake on vault. “The queen of breaststroke” Lilly King lost the 100-meter race for the first time since 2015. Swimming superstar Katie Ledecky won silver, the first non-gold in her Olympic history.

These are some of the biggest stories to come out of Tokyo 2020 so far, helping to shape the narrative: Uh, are the female athletes alright?

Which is unfair, of course, but also nothing new. For so long, sports fans and commentators alike have demanded that their female competitors be spectacular. Dominant. Ruthless. Crushing. Nothing less than perfect. But they should also be poised. Well-spoken. Respectful. Feminine. Good sports even when they lose—though they definitely shouldn’t lose. They should win. All the time. No matter what. But they can’t get angry about not winning, even though those watching at home will.

Oh, and yeah, they should not let the pressure get to them.

This messed-up dichotomy begins as early as little league practice and persists in the biggest arenas in the world. And it stings even more because we all know male athletes are consistently given much more runway to be fallible.

I mean, it’s impossible to forget when Serena Williams was docked points for contesting a call with heated words back in 2018, an event that many male tennis players said would have been big ol’ nothingburger for them. 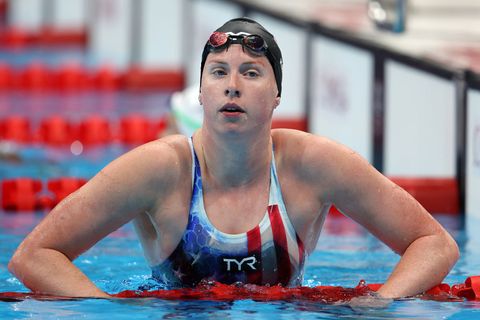 Or when, in the 2016 Olympic Games, swimmer Lilly King went viral for wagging her finger at Russia’s Yulia Efimova, who had just returned from a doping suspension. Ever since that—come on—relatively innocuous moment, King’s been called “brash” and “cocky,” words that have—you guessed it!—negative connotations when associated with women. She’s aware of this, clearly, telling the Los Angeles Times in 2020, “I joke that I act like a guy, speaking my mind on something, calling out something I don’t like, being intimidating on the [starting] blocks.”

I’m particularly frustrated by the double standard, so much so that I just wrote a new young adult thriller called They’ll Never Catch Us, a good chunk of which I spend critiquing this exact kind of culture. The story follows two teenage sisters Stella and Ellie Steckler, who are competing for the top spot on their small town’s cross country team. Their lives are upended when a new runner comes to town, threatening to best them both, but then she disappears under mysterious circumstances. Soon everyone begins to wonder if the Steckler sisters’ desire to win may have led to unimaginable violence.

It’s a book about anger, desire, and girls who want to break things and I wrote it this way because I’m so damn frustrated with how female aggression is treated in our society. Young women are told so often to tamp down those kinds of emotions because they’re “bad.” But… why? What’s so wrong with being furious or outraged? Especially in sports, where young women are told over and over again to risk their mental and physical health for a chance at gold?

At one point in the book, Stella is told that she must be ruthless as she vies for excellence. But in the same breath, her coach tells her she has to be a good sport and teammate. She has to win, but she can’t alienate anyone in the process. Following those instructions is, obviously, impossible. She’s set up to fail—just like so many female athletes who try to squeeze themselves into unrealistically neat little boxes.

We should all be emboldened by the female athletes who have spoken up about this pressure to be perfect. These crushing expectations are dangerous and damaging—for everyone. When asked about her loss on Tuesday, Osaka responded, “I should be used to [the pressure] by now, but the scale of everything is a bit hard because of the break that I took.” After deciding to pull out, Biles too cited the enormous weight on her shoulders, telling reporters, “At the end of the day, we’re human, too, so we have to protect our mind and our body rather than just go out there and do what the world wants us to do.”

Biles also said that a few years ago, she likely would have gone through with the competition, even though her head wasn’t in it and she could have been seriously injured: “Today it’s like, ‘You know what? No.’ I don’t want to do something stupid and get hurt.”

This kind of rhetoric is so surprising and refreshing because for so long, it was—to put it plainly—unacceptable. Which is especially insidious when you consider that we hold up our star athletes as icons and sources of inspiration for kids everywhere. When we don’t give female competitors space to be messy, imperfect, frustrated, anxious, or literally an ounce less than perfect, we’re telling a whole new generation of young people what we expect of them.

Thanks to this new generation of athletes, however, that message is becoming a lot more real.