Glasgow: An updated United Nations analysis shows that the world is still on track for 2.7 degrees warming above pre-industrial temperatures despite dozens of new emissions reductions pledges made as part of the Glasgow climate talks.

The projection is far worse than earlier estimates published late last week because it does not take into consideration some of the pledges made outside the formal COP process, such as promises to speed up the abandonment of coal and reduce methane emissions. 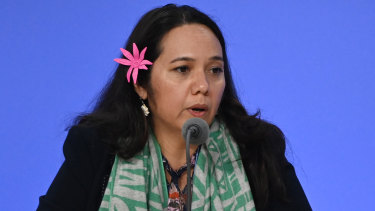 The 2.7 degree assessment by the United Nations Environmental Program is based on 2030 targets, rather than more ambitious 2050 pledges, as they are viewed as more credible.

This analysis by Climate Action Tracker finds if all governments met their 2030 targets, we would reach 2.4 degrees of warming by 2100. If nations continue with current policies rather than meeting those targets we would reach 2.7 degrees.

Its analysis also emphasised the failure of many governments to match 2050 targets with near-term action.

“Now, at the midpoint of Glasgow, it is clear there is a massive credibility, action and commitment gap that casts a long and dark shadow of doubt over the net zero goals put forward by more than 140 countries, covering 90 per cent of global emissions,” said its report.

Tina Stege, climate envoy for the Marshall Islands, held a press conference to discuss the Climate Action Tracker report for the High Ambitions Coalition a grouping of nations that has emerged as one of the more powerful blocs at the COP.

Known as the HAC it is backed by small island states and many vulnerable developing countries as well as much of Europe and the US.

She said the report showed there must be a focus on 2030 rather than 2050 targets.

“2030 is the cliff edge, certainly for my country, a small island developing state, but really for the world,” she said.

Tege called for the conference to adopt a mechanism to make sure that national commitments were in line with the overall 1.5 degree goal, and for countries like Australia that have not improved their 2030 commitment to be required to do so next year.

Two analyses published last week which took into account some of the pledges made on the COP sidelines – one by a University of Melbourne team and another by the International Energy Agency – found warming could peak beneath 2 degrees if all promises were kept.

The UN’s report is a meta-analysis of other reports including the Climate Action Trackers.

“All of these studies are using slightly different assumptions about which pledges they should include,” she said.

She said when you sift through the reports and “compare apples and apples” a clearer picture emerges.

Analyses that cite a median warming figure based on 2030 targets, project warming will reach a range of 2.4 degrees to 2.5 degrees. Those that include 2050 targets show warming being held just beneath 2 degrees.

With three days until the meeting is due to close, that goal is not in reach.

Get daily updates on the climate summit that will shape our future. Sign up to our COP26 newsletter here.