More women MPs have detailed the abuse they receive as the outcry over the treatment of women working in federal Parliament grows.

A trio of Labor MPs used the 90-second time allocated to MPs just before Question Time on Thursday to illustrate the death threats and abuse sent their way. 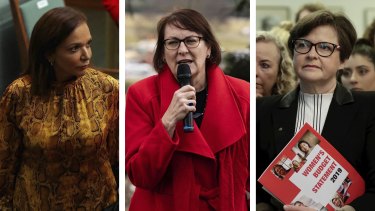 Anne Aly, the first Muslim female MP in the federal Parliament said much of the abuse she receives targets not just her gender but also her religion.

“I have somebody who regularly writes to me addressing his letters to the ‘ISIS whore’, sending me vile racist material directed at Labor female MPs,” the member for Cowan told the House.

“One user wrote: ’I can’t wait till Fraser Anning is our new Fuhrer and you will be sent to the ovens. One day soon we will be at your doorstep. We will take you and your family away to be loaded on a carriage.

“I can’t wait for the Final Solution – train carriages packed full of Muslims heading to the ovens. It will be truly wonderful.’”

Susan Templeman, the Labor MP representing the seat of Macquarie in the Blue Mountains, said she regularly received threats of death and violence.

“Sometimes direct, sometimes veiled – targeted at me, my family or my staff,” the mother-of-two and former journalist said.

“They can come via Facebook or Twitter, via email or in an anonymous letter. Occasionally, the threat’s in person.

“No-one should face this – not in any work environment.”

Ged Kearney, the newest entrant to Parliament of the trio, said her byelection was plagued with “undesirable tactics” from both sides of politics.

“One poster attached to a pole outside the front door said ‘open season on politics’ with a picture implying I was fair game to be shot,” the member for Cooper said.

“This is issue is an incredibly important conversation. It is one of unquestioned solidarity from me and my Labor sisters to all women across the political divide.

“So many of us have experienced the sexualised comments, the insults, the obsession with our bodies and our private lives and the expectation of sexual favours.

Earlier this week, Liberal MP Nicolle Flint, who is quitting politics, partly because of the abuse directed at her during the last election, broke down on the floor of the Parliament as she pleaded for the safety of women to be “above politics.”

“I ask the Leader of the Opposition, where was he and where was his predecessor and where were the senior Labor women when GetUp, Labor and the union supporters chased, harassed and screamed at me everywhere I went in the lead-up to the 2019 election?”

“I say to the Leader of the Opposition, this can’t be about politics anymore.”

Federal politics has been embroiled in a furious debate about the treatment of women ever since Brittany Higgins, a former Liberal staffer, alleged she had been raped by a colleague inside the ministerial office of her then-boss Linda Reynolds.

Higgins this week addressed a women’s march outside Parliament House in Canberra, heaping pressure on Prime Minister Scott Morrison who refused to attend the event and told women they should be grateful that they could protest without being met by bullets, as in some countries.

Separately, Attorney-General Christian Porter is suing the ABC for defamation over its February 26 report about the Prime Minister, senators and federal police being told of an historical rape allegation made against a Cabinet minister.

Porter outed himself as the accused cabinet minister but denies raping the woman who committed suicide last year and did not want to proceed with pursuing charges against the minister before her death. Police have closed their investigation into the matter.