Shakespeare didn’t specify fruit bats in his stage directions, and, while director Damien Ryan can do many things, I suspect he draws the line at bat wrangling, so presumably they invited themselves to add a layer of sylvan authenticity to the Forest of Arden. In fact it was already convincing enough, being outdoors and having real trees – just the place where love and lust might flare in multiple affairs. 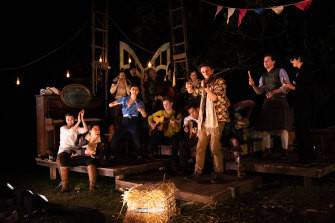 The cast of As You Like It play a bewildering number of instruments.Credit:Kate Williams

The usual setting for Sport for Jove’s summer season at Bella Vista, the gracious old farmhouse’s courtyard, hosted the early domestic and palace scenes, but once the comedy moved to Arden, so did we: beneath a canopy of Moreton Bay figs, with the chirruping bats providing chorus-like commentary on the action, as actors and audience sweltered in night-time temperatures stubbornly refusing to dip below 30 degrees. Voice projection, pivotal in outdoor performances, became more so without the farmhouse walls, and, with actors and audience having to work that much harder, and it could have been a gruelling three hours.

Shakespeare, writing for boys who would play women, created comparatively few great female roles, and Rosalind joins Cleopatra among the very finest. Such is her mix of intelligence, spirit, wit, passion and vulnerability that the whole play spins around her with centrifugal force, and when she’s absent it sometimes enters the doldrums.

Emma Wright grasps the role like it’s a baton, and she’s the relay runner who can win the race. Once ensconced in her disguise as a boy, Ganymede (to make her unjust banishment safer), she runs intellectual rings around the man who loves her (but conveniently doesn’t recognise her), Orlando (Abe Mitchell), the proudly melancholic Jaques (Berynn Schwerdt), her dear friend Celia (Jade Fuda) and the rest, as if they were standing still.

Wright has Rosalind’s lines spitting and fizzing, while also catching the duality whereby, for all her nous, she is still young and insecure – a tangle of charms to woo the audience as assuredly as Orlando. Fuda carves out a feisty, sparky Celia, while somehow softening the little spats with Rosalind, and, in a cute piece of doubling, she also plays Phebe. Phebe shuns the love-sick Silvius (Shan-Ree Tan, whose projection was flawless throughout) in favour of Ganymede, and among countless joyous touches, Ryan has changed Phebe from shepherdess to a cop, whose penchant for handcuffs extends from crime scenes to bedrooms.

Although Mitchell’s Orlando might be smitten, he’s never wet, which helps balance the play, because why would one of Rosalind’s calibre settle for a sop as well as a lousy poet? Schwerdt expertly renders the professionally morose Jaques, a character who almost deserved his own play, that we might have had more speeches to rival “All the world’s a stage…” In a cast of 14, Hannah Raven entertains as the brazen Touchstone, and Sarah Jane Kelly as a boot-scootin’ Audrey.

Ryan’s production highlights the play’s innate musicality, with the entire ensemble singing and playing a dizzying array of instruments on songs penned and directed by Alex Steedman, to jolly, pretty or moody effect. These do slow the show down, however, and when you throw in the move between locations, an interval and some sluggish scenes without the effervescent Rosalind, there’s a strong argument for some songs to be shorter. Nonetheless, Ryan has captured much of the play’s spiky, blithe and zany, gender-crossed essence, and if it gathers pace, that will be a bonus.