New England Patriots player Justin Herron and another man helped stop an attempted sexual assault of a woman while he was training in a park in Tempe, Arizona, CBS Boston reported.

The offensive lineman and local resident Murry Rogers were honored by the Tempe Police Department on Wednesday after they both intervened and stopped the attack on a 71-year-old woman in Kiwanis Park on March 20. They were presented with “Outstanding Service” awards by the department.

Our sincere gratitude to the two hero’s that saved an elderly victim of a vicious attack. Can’t miss this story. @azfamily @12News @FOX10Phoenix @abc15 @Patriots pic.twitter.com/Tw1woCrewA

Police said 30-year-old Kevin Caballero allegedly shoved the woman to the ground and tried to sexually assault her in broad daylight before Herron and Rogers stepped in and detained the assailant until officers arrived.

“It was a crazy experience,” Herron said. “Something that I never dreamed I thought I would see… In that moment, I was in shock. It was 11 a.m., not one cloud in the sky and in a very open field. The fact that it happened there at that time was just very shocking.” 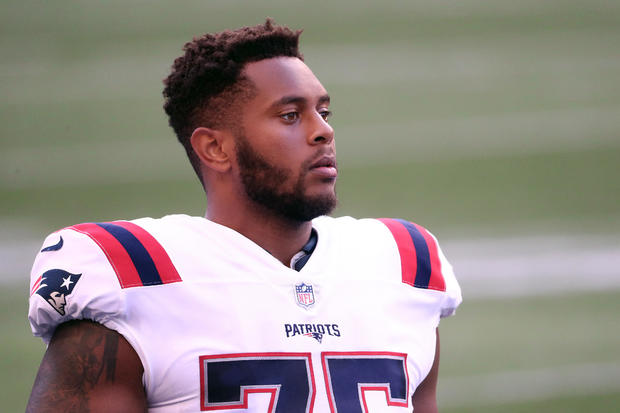 The 25-year-old player, who is listed as 6-foot-5 and nearly 300 pounds, was walking around the park doing a light workout when he heard the victim screaming.

“All I could do was thrust myself over there and help the victim, make sure that I could comfort her and be the best person I could be to her around her,” he said.

“I’m a football player, so I’m kind of a big,” he added. “I try not to be too aggressive knowing that I could hurt somebody. I do have a loud voice. I yelled, told him to get off of her and then yanked him off and I told him to sit down and I told him to wait until the cops come.”

Rogers was in the park trying to reserve a spot for his 15-year-old daughter’s birthday party and said he helped detain the suspect while Herron got the victim away. Rogers said the woman called the two good Samaritans “her angels.”

Caballero was charged with kidnapping and attempt to commit sexual assault, police said.

Herron was a sixth-round pick by the Patriots in 2020. He played 12 games for New England last season.