The Morrison government’s landmark media bargaining code will be amended in a last minute bid to bring Facebook back to the negotiating table after the social media giant banned Australians from sharing news content on its platform last week.

As senators continued debating the code ahead of a vote as early as Wednesday, the Coalition partyroom signed off on the amendments on Tuesday morning. 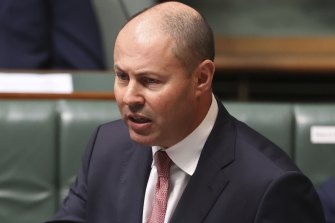 Industry sources said the amendments included inserting a two-month mediation period into the code to give the parties more time to broker agreements before they are forced to enter a binding final offer arbitration process.

Another amendment will also clarify that the government will consider any commercial deals already struck between the parties before the Treasurer formally designates the code as applying to Facebook and Google. A new provision will also require the government to give the digital platforms one month’s notice before they are designated.

The code sets out a framework for forcing Google and Facebook to broker commercial deals with media companies for the value they obtain from having news content on their platforms. Facebook and Google have both fiercely resisted the code, describing it as “unworkable” and threatening to curtail their services in Australia if it passed unamended.

Treasurer Josh Frydenberg has spoken with Facebook global chief Mark Zuckerberg multiple times in recents weeks in a bid to resolve the social media giant’s concerns with the code.

Facebook carried out its threat on Thursday, banning publishers and users in Australia from sharing or viewing news articles on its platform after the news media bargaining code passed the House of Representatives the previous night.

Google threatened to exit Australia in protest against the code, but later struck multi-million dollar deals with major Australian publishers, including Nine Entertainment Co, which publishes this masthead, for the use of their content.

Facebook attempted to restart negotiations with Nine and News Corp late last week, but the parties have been unable to resolve an impasse over Facebook’s demand for a so-called “poison pill” clause. The clause would allow Facebook to terminate the deals struck with publishers at any time, including once the new laws are passed.