Three in five home sellers have not made green improvements to their properties, new research has revealed.

And their reasons for doing so are either because they don’t know what changes to make, or that the improvements are too expensive, according to Rightmove.

This is despite buyers expecting discounts on homes with poor energy ratings in the future. 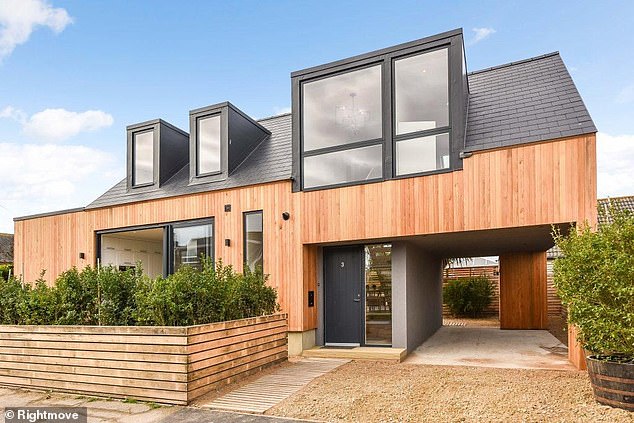 Buyers are increasingly searching for eco-homes, according to Rightmove with this two-bed Hayling Island detached version for sale for £650k via Hugh Hickman & Son

It comes after the introduction of new Government regulations with an emphasis on an increase in the energy efficiency requirement of new homes.

The Future Homes and Buildings Standard means that new homes built from 2025 must produce 75 to 80 per cent less carbon emissions than those delivered under current regulations.

Buyers are also faced with increased energy bills and are increasingly looking at homes that help to reduce these bills – such as those with solar panels.

Rightmove said 41 per cent have already made changes to improve their home.

The remaining 59 per cent said the biggest reasons for not doing so was that they don’t feel the need – at 40 per cent – and the costs being too high – at 33 per cent.

Meanwhile, the overwhelming biggest motivator among homeowners to make changes was to reduce their energy bills. 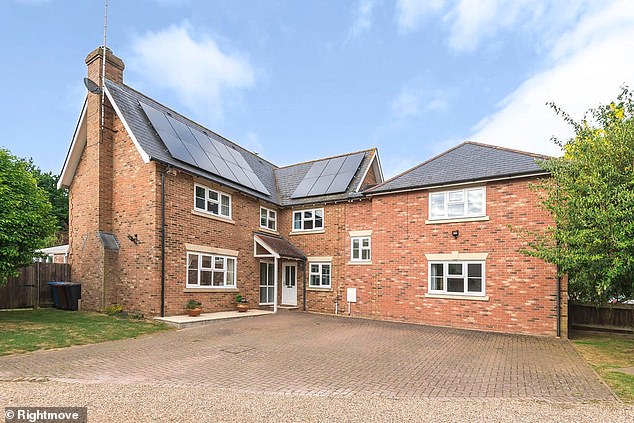 Buyers are facing increased energy costs, but the property helps with its solar panels – the six-bedroom house is in Great Cornard, Sudbury, and is for sale for £675k via Fenn Wright

Rightmove suggested that sellers who have already made changes that have improved the Energy Performance Certificate (EPC) rating of their home are pocketing as much as 16 per cent extra on average when selling their home.

It studied more than 200,000 homes listed on Rightmove that had sold twice, with an improved EPC rating the second time.

Those who had upgraded their rating from an F to a C added an average of 16 per cent to the price achieved for their home.

At the same time, those moving from an E to a C banked sellers an extra 8 per cent on average and moving from a D to a C resulted in an average of 4 per cent extra. 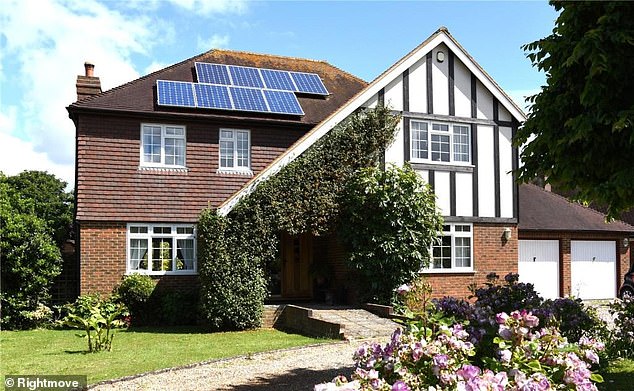 This five-bed detached house in Sutton Valence, Kent, also has solar panels and is for sale for £1.15m via Savills estate agents

Buyers are already becoming more conscious of green features when looking for their next home, with features such as solar panels and heat pumps proving popular in Rightmove’s keyword sort tool.

In addition, there are now 73 per cent more green terms such as ‘sustainable’ and ‘low carbon’ being used by agents as selling points in their property descriptions on Rightmove compared with the start of 2020.

There are also early signs that better rated homes could sell more quickly than poorly rated ones. EPC B-rated houses were the fastest type of home to sell in the last few months – at 30 days -, overtaking EPC D-rated houses for the first time – at 31 days -, although the difference so far is only one day quicker.

The average EPC rating of a home in Britain is a D, so the homes with the lowest ratings of an E to a G are likely to be the first to start seeing buyers trying to negotiate discounts.

However, Rightmove added that the experience of finding and falling in love with a home is an emotional one, with a sale also depending on other features of a property that attract buyers.

In the rental market, there are proposals from the Government to introduce legislation to make landlords improve their homes up to an EPC rating of C.

If this happens it is likely to exacerbate the already severely stock constrained market in the short-term as more landlords sell up, and increase rents for tenants, according to Rightmove.

However, it said this will help to improve the quality of rental homes in the long-term.

HOW TO IMPROVE AN EPC RATING

There are several ways that you can boost the rating on your property’s Energy Performance Certificate.

Some are cheaper options than others such as replacing light bulbs with LED versions.

They also include more expensive options, such as installing an air source heat pump.

These look like an air conditioning unit on the outside of a building, and work a bit like a fridge in reverse, using electricity to extract energy from the outside air to provide heating and hot water for homes.

They can be expensive to install, costing around £10,000, but families will be encouraged to install the low carbon systems from April with grants of £5,000 being provided.

Here are five ways to improve the rating on your property’s Energy Performance Certificate:

2. Insulate the walls and roof

Rightmove went on to suggest that those homes with poor EPC rating could miss out on the best mortgage deals in the future.

Rightmove’s Tim Bannister said: ‘Improving a property’s green credentials is critically important as the UK strives to hit Net Zero. The immediate challenge is the sheer number of properties that are currently below an EPC rating of C and the costs involved to fix this.

‘There has been much debate about what could happen in the future to homes with poor energy efficiency, and the Government has said it will make sure these homes can still get mortgages.

‘But I don’t think it would be a surprise if in ten years’ time we see that people taking out mortgages or remortgaging a home with the lowest EPC ratings find that they miss out on the best mortgage rates.’

Mr Bannister added that buyers will become more aware of the green improvements that are needed and will factor this in when they consider how much to offer.

He said: ‘It’s likely to be a gradual rather than a swift change, but we can already see the green price premium when improvements are made.

‘Of course, improvements that make a home more energy efficient often also means the condition improves, such as installing new windows. But the end result of making improvements is not just a refurbished home worth more money, it’s often also a greener home.

‘It’s clear that many home-owners want to make improvements, but the complexity and costs of the changes means that people need more help and financial assistance to know which changes to make and when.

We know saving on energy bills is the biggest motivator to make changes, and in future we’ll need to consider costs for cooling our homes as much as heating them, as we found during the recent heatwave. This opens up more questions about the best systems that people should be installing to futureproof their homes. 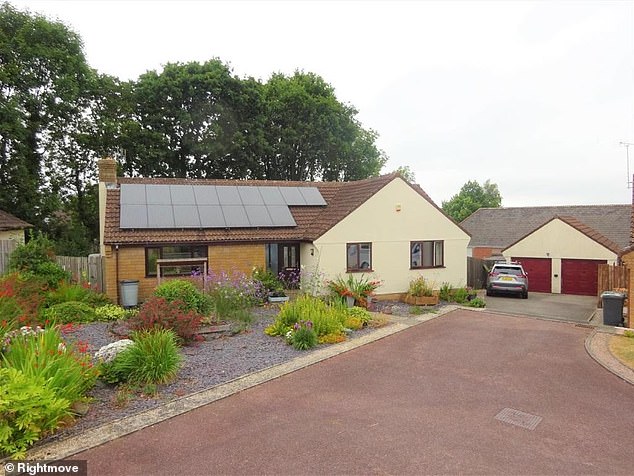 Solar panels are also popular on bungalows, with this three-bed property in Tedburn St Mary, Exeter, for sale for £550k via Burgoynes estate agents

‘That said, houses are ultimately homes and character continues to hold huge value for many.

‘What remains to be seen is how affordable and straightforward sustainable changes to period properties will become in the longer term, as this will ultimately help preserve the value of historic homes.

‘If buying a home was purely a financial decision, a house with a strong EPC would be top of the list. But a purchase of a period home is often driven by the heart, and not just the head. EPCs create more transparency so buyers know what’s what when they become the custodian of an older home.

‘We’re beginning to see increasing numbers of sustainable new homes and schemes built in a period style. These sustainable character homes have seen growing popularity in recent months – perhaps signalling a confluence of the nation’s adoration of quintessential looking houses with the rise in cost of living and greater eco-consciousness.’

Andy Sutton, of developer SERO, said: ‘The discount that arises from the works that need to be carried out in a home could in the future be considered by a lender when they value a home.

‘If this was the case, a seller would want to know what works are going to be flagged up first, and a buyer might use it as a way to ask for a discount on the asking price.’