While all my friends were checking their phones, eagerly awaiting their invitations to get a COVID-19 vaccine, I was desperately looking for ways to get out of it.

No, I’m not anti-vaccine, nor am I “vaccine-hesitant.” I’m part of a less publicized group: the needle-phobics.

I have trypanophobia, the extreme fear of medical procedures involving injections, which means I’m terrified of needles and do everything in my power to avoid them.

When I finally got my text, I stared at it with horror. Despite the overall success of the United Kingdom’s vaccine rollout, it has still taken half a year to give every adult access to their first shot, with doses being offered based on age (from oldest to youngest). Seventy percent of the U.K. population has now received at least one dose, according to data from The Financial Times; for comparison, 57% of the U.S. population has gotten at least one dose of a vaccine.

I’m 24, so I was at the back of the line for the jab. I had spent the last six months telling myself my fear wasn’t hurting anyone because the vaccine rollout hadn’t reached me yet. I relished the knowledge that it was out of my control.

But now that I had received my notification, not getting a vaccine would be my choice, and I faced the prospect of willingly putting myself ― and others ― at risk because of my trypanophobia.

I hastily deleted the text, turned off my phone and hid it in my bedroom. I was about to start work for the day and didn’t have time to worry about what I’d do.

“I’ll deal with it later,” I promised myself.

If someone even mentions injections, I reflexively cover my arm with my hand. I’ve never successfully had a vaccine without fainting, and when I was 18, I screamed and cried through every blood test I underwent. My mum says she has never gotten over her embarrassment from that incident.

I’ve never “liked” needles, but my phobia developed after receiving my first vaccine when I was 14.

That vaccine was to guard against HPV, a virus that can lead to cervical cancer, and it’s given to teenage girls at high schools across the U.K. every year. When I received it, I fainted for the first time in my life about 10 minutes after it was administered (I was told it may have been due to my blood pressure rising and then quickly falling in response to the vaccine) and injured myself in the process. The injection also hurt a lot more than I’d expected, and the scratching sensation made my stomach turn.

So, even though I sincerely wanted a viable vaccine to be created and available, the minute I learned one was going into production, I was petrified.

I am not alone in being at the mercy of this paradox. Up to 1 in 10 people are so scared of needles, they might put off important medical treatments to avoid them, according to the charity Anxiety U.K. Is that irrational? Of course, but that is the nature of phobias.

Some public figures have also shared similar fears. In March, Charles Walker, a Conservative member of Parliament, refused to receive a vaccine because of his extreme aversion to needles. Walker said he would get it once alternative methods of vaccine administration, such as a nasal spray, are approved.

That would have been a good moment for the U.K.’s National Health Service or the government to acknowledge ― and tackle ― the threat that needle phobia poses to the vaccine rollout. I’m surprised there has been so little coverage of this issue, particularly given all the airtime afforded to people who are anti-vaccine.

But even if the NHS wasn’t addressing this issue, I certainly was. I vowed to find a way to deal with it and I sent inquiries to several cognitive behavioral therapy clinics (of which there are few) to get some help.

In Brentwood, Essex, for instance, trypanophobics can sign up for virtual reality sessions to help them prepare for injections, but if you aren’t registered as a patient at a medical practice in that area (I’m not), you can’t benefit from it. That meant counseling was my best option.

I applied for counseling and then I waited … and waited. I finally got an email informing me that I could not get an appointment for four months. Four months? It had already been six weeks since I got the text stating I was eligible for a vaccine, and my guilt over not going yet was rising.

It was then that my dad asked me to get the jab. He was very ill with cancer at the time, and we were sitting on the sofa at his house when he just came right out and asked if I had been vaccinated.

I admitted I had not.

If I inherited my fear of needles from anyone, it’s him. But if anyone has shown courage in the face of fear, it’s also him. When he was diagnosed with cancer last October, needles became a regular part of his life.

Thinking about his bravery put my fear of having to contend with a single needle one time into perspective. So, that was that. I booked my appointment, which was set to take place in four days.

At first, I felt calm and confident.

“It’s just a scratch,” I told myself, repeating what others had already reminded me. But as the appointment crept closer, my usual symptoms set in. I couldn’t eat or sleep, and I started panicking.

I talked to my mum about my phobia, but she doesn’t really understand it. However, she has fears of her own, like thalassophobia ― the fear of open water. I told her to imagine being dropped into the middle of the ocean, and when I put it like that, she was able to empathize with what I was going through.

On the day of my appointment, Mum drove me to the vaccination center and insisted that she be allowed to hold my hand the whole time. Luckily, it wasn’t very busy, so the staff was happy to allow her to accompany and support me.

Before we entered the center, she covered my eyes with a face mask so I wouldn’t see any needles. She asked the staff not to talk about the injection with me, and reminded them not to tell me when they were about to deliver the shot so that I wouldn’t tense up. In her own words, she said it would be “harder and more painful to get the needle into a muscle thicker than a cold block of butter.”

At this point, I must pay tribute to the nurses who reassured me and helped me stay calm. I was guided by hand through the center while they outlined the potential side effects. Then they let me lie down. Mum was right there the whole time.

When it was time for the vaccination, I felt the needle go in and, despite what anyone claims, it hurt like heck. The injection seemed to go on and on, and I swear I could still feel the needle in my skin long after the nurse said it had been removed. I felt sick to my stomach, but then my heart rate started to slow, the nausea subsided and the relief began to creep in.

When it was over, the nurses made me feel like the bravest person in the world. Having convinced myself that my fear would be treated as a nuisance, I was surprised and touched to find the volunteers were practically tripping over each other to support me.

I still hate needles. I realize now that everyone who’d told me beforehand that they had barely felt their jabs was lying (or they have a much different pain threshold than I do), though I can totally see why. I also fainted in the garden center a few hours after my COVID-19 vaccination (we still aren’t sure why the reaction was so delayed), so my record remains intact on that one.

That said, I’m so relieved I got it. Had I known just how brilliant the nurses would be, I would’ve gone sooner. And now I don’t feel quite so nervous about my second appointment.

The one thing that will really stick with me is that after my injection was over, one of the nurses said they would rather people arrive scared and in need of help than choose to swerve their vaccination.  I think that’s important for us all to remember.

Shaming those people who are scared of needles is not going to get them running to vaccine centers. If anything, it might encourage them to lie about having received a shot, which won’t help any of us.

I understand that rolling out vaccines on a national level is a huge task for any country, and some people might think accommodating needle-phobics is annoying or simply too much work. But really, all we need is some tangible support, like hand-holding and maybe a blindfold. A little kindness won’t hurt either. All in all, if that helps more people get vaccinated, that doesn’t seem like such a heavy lift, does it? 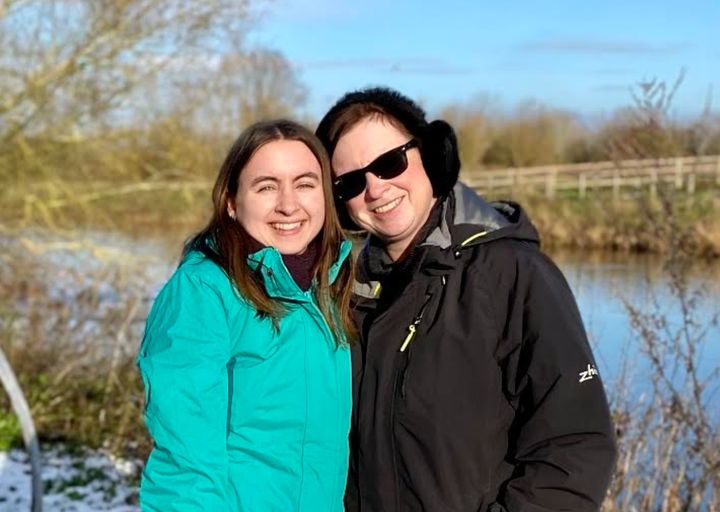 In the meantime, I’m proud that I plucked up the courage to do something terrifying but incredibly important ― something that not only protects me, but also protects my family, my friends and my whole country. That made it all worthwhile.

Note: Laura’s father passed away shortly after she wrote this piece. She is dedicating it to him.

Laura Purkess is a 24-year-old freelance writer and financial journalist at Citywire in London, where her investigative reporting has won industry awards. She holds a degree in linguistics and has completed professional finance qualifications with the Chartered Institute of Insurance. You can find her on Twitter at @laurapurkess and on Instagram at @laurapurkess. Her website is www.laurapurkess.com.

Do you have a compelling personal story you’d like to see published on HuffPost? Find out what we’re looking for here and send us a pitch.