I remember a conversation I had with Nick Cave in Melbourne, 20-odd years ago. His twins had just been born and he’d begun what I perceived as a mellowing process from the often gruff and chafing interviewee I’d know through the ’90s.

Back then, he’d felt justly irritated by pop journalists obsessed with seeing his work through the cult of personality that surrounded him. Still, he admitted with a shrug, the art that spoke to him most strongly was inextricably rooted in the life of the artist. What good was art without the gravity, the cruelty, and the miracles of the lived experience that inspired it?

Today all I can think about is the cruelty. 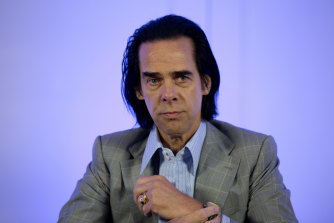 Nick Cave announced the death of his son Jethro on Monday, less than seven years after the death of another son, Arthur. Credit:AP

It comes with equal parts despair and guilt, because I’ve only ever met Cave a few times, and his son Jethro Lazenby only once, back when he was a teenager. So what right do I have to take this cruelty to heart? I’ll see my sons at the end of the day. Hug them, even as they try to squirm away.

The death of 31-year-old Jethro, to causes undisclosed, is the second such cruel loss that Cave and his family have faced in recent years. In July 2015, 15-year-old Arthur Cave died after falling from a cliff in Brighton, England, home to his father, his mother Susie Bick and his twin, Earl.

I’ll share his grief today from afar, as much as I possibly can, like millions around the world, but I won’t be despairing. That, as it happens, is largely because of something he recently wrote himself on The Red Hand Files, the online blog where he has fielded questions of all kinds from fans since September 2018.

In Red Hand missive #190, Nick responded to a Stockholm fan named Valerio who was succumbing to cynicism, losing his faith in goodness, and fearful of how that might infect his young son. He was right to be fearful, Nick responded, but resist he must. The post moved me, as they often do.

Hope. Art is the highest expression of it that we have, the German painter Gerhard Richter famously observed. The American writer Kurt Vonnegut Jr put it another way. “We are here to help each other get through this thing, whatever it is,” he wrote of his calling. He was actually quoting his son, Mark, in turn giving hope to the father who struggled with cynicism and despair all his life. 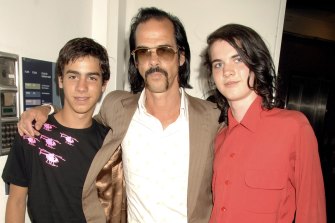 Nick Cave with his sons Jethro (right) and Luke, in 2006.Credit:Getty

Not even the most avid fans, as we reach out with every fibre we have to offer love and hope to him and his family, could wish for the lived experience of Nick Cave today. Andrew Dominik’s new documentary on Cave and his musical partner Warren Ellis, This Much I Know to Be True, will be hard to watch when it opens at cinemas tomorrow.

The songs that will inevitably stem from this latest cruel tragedy will be harder still to listen to. But surely not even Cave’s most cynical ‘liked-his-old-stuff’ detractors – and trust me, they are legion – can fail to find hope in the fact that those songs will come.

“Hopefulness is not a neutral position” he wrote to that fan named Valerio last month. “It is adversarial. It is the warrior emotion that can lay waste to cynicism. Each redemptive or loving act, as small as you like, Valerio, such as reading to your little boy, or showing him a thing you love, or singing him a song, or putting on his shoes, keeps the devil down in the hole. It says the world and its inhabitants have value and are worth defending. It says the world is worth believing in. In time, we come to find that it is so.”

If Nick Cave can believe that, I think I can get through this thing. Whatever it is.