Business as usual! Beaming King Charles and Queen Consort Camilla wave as they attend Sunday service at Balmoral in first joint appearance since Prince Harry demanded they apologise to Meghan

The King and Queen Consort beamed as they arrived at Crathie Kirk Church in Balmoral this morning to attend Sunday service after a week of turbulence for the royal family following explosive accusations from Prince Harry as his bombshell memoir, Spare, was released.

The royals, who were wrapped up for the cold winter weather from behind the wheel of the car, put on a smile as they were seen together in public for the first time since Prince Harry, 38, referred to his stepmother as a ‘villain’ and accused her of leaking stories to the press about private conversations with Prince William.

The Duke of Sussex accused the Queen Consort of ‘trading information’ with the Press in an attempt to get more positive stories written about herself, while claiming his did not make his wife Meghan Markle feel welcome in the family and demanding an apology from them.

However Camilla, 75, put on a brave face today as she went to church despite royal sources reportedly claiming she has been ‘left astounded’ by her stepson’s accusations. 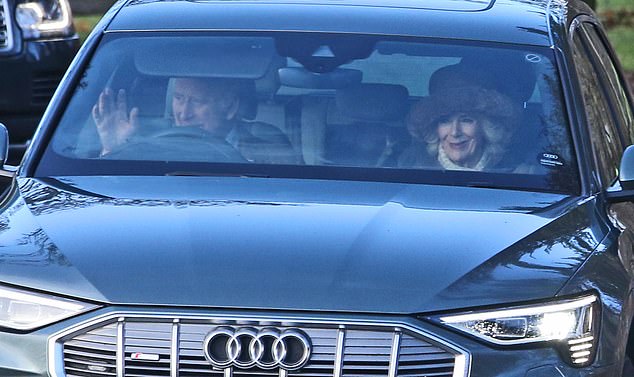 Vanity Fair reported the royals had been shocked by Harry’s allegations, with one source saying: ‘He is on a path of self-destruction. There is so much vengeance. The late Queen would have been absolutely devastated.’

Elsewhere, insiders detailed how the duke ‘fails to see the irony’ in his behaviour, accusing him of being the one leaking private conversations to the media.

Yesterday, Harry told the Telegraph he wanted his family to apologise to Meghan, sending them the message: ‘You know what you did.’ 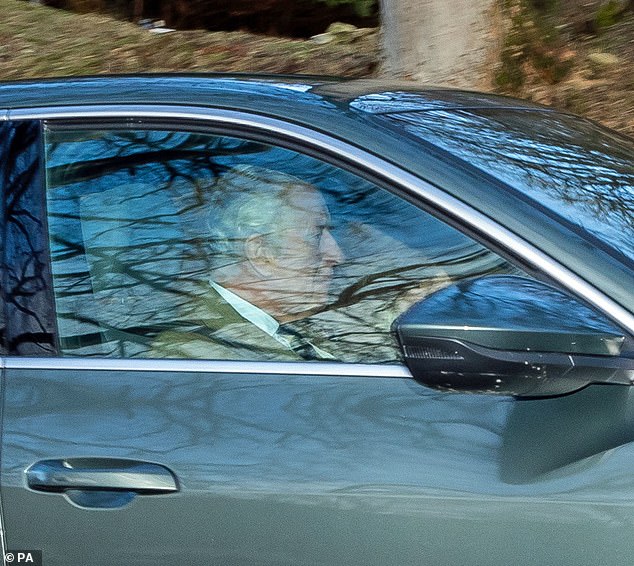 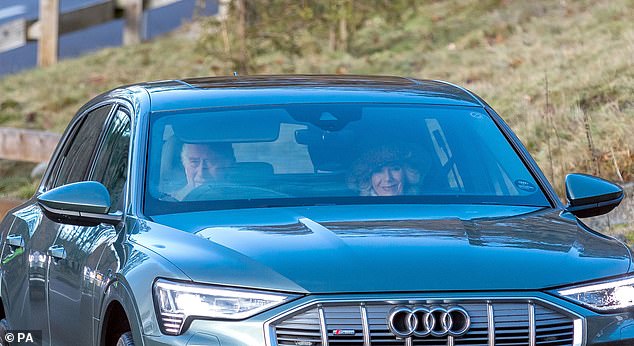 Camilla, 75, was wrapped up for the cold weather as she arrived at church with the King, who was behind the wheel

Harry has discussed, in depth, his relationship with Camilla in both his book and his publicity tour to promote it.

Harry told journalist Anderson Cooper in a CBS interview that the Queen Consort was content with bodies – including his own – being ‘left in the street’ as she tried to rehabilitate her image after her long affair with King Charles while he was married to Princess Diana.

Referring to a 1995 interview in which his mother, Princess Diana, famously referred to Camilla as the ‘third person in her marriage’, Harry said that this admission turned the now-Queen Consort into a ‘villain’, adding: ‘She needed to rehabilitate her image.’

Harry’s memoir levels even more accusations at Camilla, including claims that she ‘eavesdropped’ on a conversation between Meghan Markle, 41, and King Charles, 74.

After Camilla and Meghan bonded over their shared love of animals during afternoon tea at Clarence House in 2016, the Duke said his father and girlfriend fell into a ‘quiet conversation’, which intrigued his stepmother.

Describing how Camilla was ‘stuck’ with him, Harry recalls how she seemed ‘keener on eavesdropping’ on Meghan and Charles’ discussion.

Harry says the couples then ended the engagement by discussing Meghan’s career.

The Duke also claimed that, in Novembwe 2017, his stepmother had suggested he assume a royal role that would take him away from London, as governor general of Bermuda.

Harry alleged that the then Duchess of Cornwall put forward the suggestion as it would take the Sussexes out of the ‘red-hot centre of the maelstrom’ as they struggled with the limelight.

However, he pointed out that this would conveniently ‘take them out of the picture’ as well.

After telling Anderson Cooper that Camilla had been a ‘villain’ who needed to ‘rehabilitate her public image’, the Duke clarified in a later interview that he does not view her as his ‘evil stepmother’.

Speaking to Good Morning America on Monday morning, he said: ‘I have a huge amount of compassion for her, you know, being the third person within my parents’ marriage. She had a reputation, or an image, to rehabilitate.

‘Whatever conversations happened, whatever deals or trading was made right at the beginning, she was led to believe that that would be the best way of doing it.’