Labor leader Anthony Albanese has made a $2.5 billion pledge to improve the treatment of older Australians with an aged care package that opens a wider election fight on “fairness and decency” by holding out the promise of higher wages for millions of workers.

The Labor plan would force every aged care facility to have a registered nurse on site at all hours, hire more carers, set higher standards for meals and fully fund a boost for workers through an appeal to the Fair Work Commission to set higher wages.

But the wage pledge does not come with a specific funding commitment, given Labor cannot know what the commission will recommend.

Mr Albanese put the plan at the centre of a budget reply speech on Thursday night that promised billions of dollars for local industry and manufacturing as well as more defence spending to help Australia “stand on our own two feet” after the Russian invasion of Ukraine unleashed instability.

“This agenda isn’t radical. My team and I are promising renewal not revolution,” Mr Albanese told voters in his speech to Parliament.

“A renewal of the best of Australia’s values: fairness, decency, supporting aspiration, looking out for each other, rewarding hard work.

“I want the sacrifices all of you have made through these tough times to lead to a better future.” 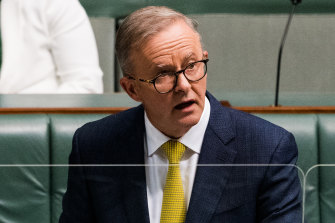 But the speech made no mention of the key government measures in the budget on Tuesday night – the $8.6 billion package of tax offsets, cuts to fuel excise and one-off payments – and instead offered a general assurance that Labor would act on the cost of living.

Prime Minister Scott Morrison has ruled out calling the election this Sunday but could act soon afterwards to open the official campaign with a budget that forecasts unemployment will fall to 3.75 per cent later this year and real wages will rise next year.

“The cost of everything is going up – but your pay isn’t,” Mr Albanese told Parliament in a central message for the Labor campaign.

“But ask yourself: is this really as good as it gets? Because I believe we can aim higher. I believe Australians deserve a better future.

“I believe in higher wages.”

While the aged care policy commits a Labor government to funding a pay rise for the sector if one is recommended by the Fair Work Commission, the party’s wider economic policy favours wage rises rather than insisting upon them or promising to fund them.

With the budget reply competing for attention with Wednesday’s service for cricketer Shane Warne and Thursday’s address to Parliament by Russian President Volodymyr Zelensky, the Labor strategy was to focus on a single big policy measure and hold other major pledges for the formal election campaign.

Mr Albanese promised to “end the climate wars” with a policy to reduce emissions and said Labor would adopt every recommendation in the [email protected] report on the treatment of women, and would create a national anti-corruption commission.

Referring to his son, Nathan, during his speech, Mr Albanese promised to build a stronger Australia for the next generation and also committed Labor to embrace the Uluru Statement from the Heart and to seek a referendum to include an Indigenous Voice to Parliament in the constitution.

Mr Morrison unveiled $17.7 billion for aged care last year in response to the Royal Commission into the sector – titled “Neglect” – and added $468.3 million in further funding in this week’s budget as well as a further $458.1 million for the pandemic response across the sector.

The Labor policy consists of five measures starting with a regulation that requires every aged care facility to have a registered, qualified nurse on site at all hours of the day and on every day of the week.

The second measure is to mandate that every resident in an aged care facility receives a minimum of 215 minutes of care per day, as recommended by the Royal Commission.

“That means more care for every resident, every day,” Mr Albanese said.

“So, if you have a loved one in aged care, you can be certain they will get more time with a registered nurse and more time with enrolled nurses and personal care workers.”

The third measure is to support a real pay rise for aged care workers in a case being taken by unions to the Fair Work Commission and which a Labor government would fund. This means the financial commitment was not included in the $2.5 billion cost of the policy because the cost could only be known after a decision by the commission.

The Health Services Union has launched a case at the Fair Work Commission asking for a 25 per cent pay rise, taking the wage for a qualified personal carer from $23.09 to $28.86 an hour. The union expects to make final submissions in June and to get a decision in August or September or later, making this an issue for a future budget if Labor wins.

The fourth measure is to promise better food for residents by setting a mandatory nutrition standard for aged care. The fifth is to promise “integrity and accountability” with more staff and funding for the Aged Care Safety Commissioner, as well as new powers to oversee the sector.

While the aged care pledge was the centrepiece of the budget reply, Mr Albanese hammered the theme of self-reliance in Australia on industry, manufacturing, oil supplies and other fronts.

“Russia’s brutal invasion of Ukraine has reminded us that we must be prepared for the uncertainty that global events unleash here at home,” he said.

“The pandemic too has shown us that we are not immune to global events. We must be more self-reliant.

Vowing to establish a Disaster Ready Fund to respond to floods and fires, he needled Mr Morrison by reminding him of his comments two years ago that “I don’t hold a hose” as prime minister.

“You deserve a leader who holds a hose and a government that stands up for you,” Mr Albanese said.

In another barb, the Labor leader quoted French President Emmanuel Macron to suggest that voters would see through the tax cuts and spending increases in the budget.

“Just one-off handouts to get through an election, with all the sincerity of a fake tan,” he said of the budget.

“I think Australians will see this for what it is. Actually, I don’t think, I know.”

Mr Macron said “I don’t think, I know” when asked last year if Mr Morrison had lied to him.