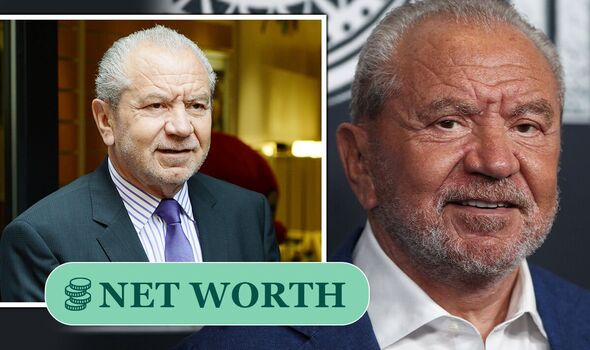 The Apprentice returns tonight at 9pm on BBC One. The show has been broadcast every year since 2005, with Lord Sugar at the helm. Born in Hackney, London, to Jewish parents, the 75-year-old is the 138th richest person in Britain, according to The Sunday Times Rich List. There are 177 billionaires in the UK. So, how much money does he have in the bank?

The Londoner has made his money through his successful business, as well as his TV appearances.

He was knighted in the 2000 New Year Honours for his services to business – a sector he knows extremely well.

After leaving school at 16, Lord Sugar worked for the civil service as a statistician at the Ministry of Education.

But it wasn’t long until he entered the world of business. In 1986, aged just 21, he set up Amstrad with £100 of Post Office savings. He started off selling radio aerials for cars and other electrical goods out of a van which he had bought for £50 and insured for £8.

Amstrad stands for his initials: Alan Michael Sugar Trading. By 1980, Amstrad was listed on the London Stock Exchange and, during the 1980s, the company doubled its profit and market value every year.

On July 2007, it was announced that broadcaster BSkyB had agreed to buy Amstrad for about £125million.

At the time of the takeover, Sugar commented that he wished to play a part in the business, saying: “I turn 60 this year and I have had 40 years of hustling in the business, but now I have to start thinking about my team of loyal staff, many of whom have been with me for many years.”

In July 2008, it was announced that Sugar was standing down from Amstrad as chairman, to focus on his other business interests.

Another of Lord Sugar’s interests over the years has been football. Between 1991 and 2001, he was the chairman and part-owner of Tottenham Hotspur.

During this time the club lifted one major trophy, which was the League Cup in the 1998 to 1999 campaign.

Daniel Levy became Tottenham Hotspur owner in 2001 and Lord Sugar sold his final stake in the club for £25million in 2007.

Lord Sugar is most famous for his role on The Apprentice. As host, the 75-year-old fires at least one candidate each week until only one candidate is left.

Until 2010, the winner was then employed in his company and since 2011 wins a partnership with Lord Sugar, including his investment of £250,000 to establish their own business.

As a condition for appearing in the third series, Sugar placed a requirement that the show be more business-oriented rather than just entertainment and that he should be portrayed in a less harsh light.

In September 2020, it was announced that Lord Sugar would be the new CEO on The Celebrity Apprentice Australia, replacing former CEO Mark Bouris.

Lord Sugar has also appeared on a celebrity special of Who Wants to Be a Millionaire?, as well as the BBC Two documentary The Real Sir Alan.

Other ventures include Amsair Executive Aviation, founded in 1993 and run by Lord Sugar’s son, Daniel. Amsair operates a large Cessna fleet, and one Embraer Legacy 650 with the registration G-SUGA, offering business and executive jet charters.

As for his personal life, Lord Sugar married Ann Simons, a former hairdresser, on April 28, 1968 at Great Portland Street, London. They have two sons and a daughter and live in Chigwell, Essex.