The emotional moment a mother cradled her newborn baby for the first time after suffering a stillbirth at 36 weeks pregnant a year earlier was captured on BBC2’s Hospital.

Faith, 25, was diagnosed with a rare placental condition, massive perivillous fibrin deposition (MPFD), which effects just one in 1,000 pregnancies and can increase risk of baby loss by up to 50 per cent, after her baby son Grayson was tragically still born last year.

During her second pregnancy, she was treated by Consultant Obstetrician Professor Siobhan Quenby at University Hospital Coventry & Warwickshire, who deals with some of the most complex pregnancies in the country and works for one of only four miscarriage research centres in the UK.

Despite fears about losing her second child, Faith gave birth to a healthy baby girl and heartwarming footage shows the new mum and partner Aaron, 24, meeting their daughter for the first time. 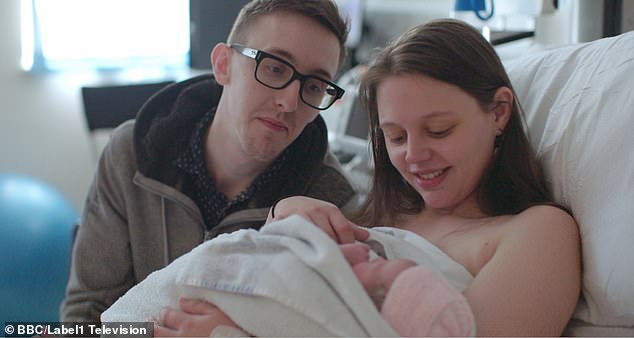 The emotional moment new mother Faith, 25, cradled her newborn baby for the first time after suffering a stillbirth at 36 weeks pregnant a year earlier was captured on BBC2’s Hospital 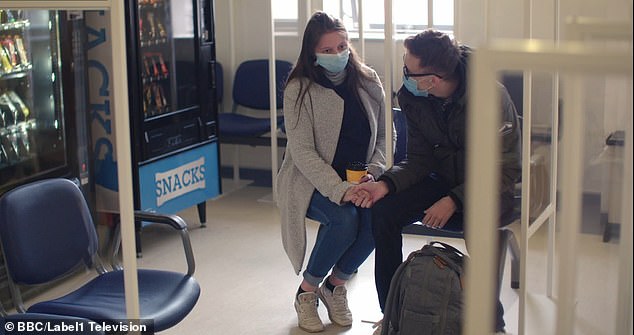 The documentary followed women with high-risk pregnancies at the maternity unit at Coventry’s University Hospital, where staff are busier than ever following an 11 per cent increase in women expecting a baby since the pandemic began.

It’s estimated that more than one in four pregnancies end in miscarriage and latest NHS figures reveal that a stillbirth happens in around 1 in every 200 births in England.

‘Faith’s last pregnancy, she had a still birth at 36 weeks they then sent the placenta to be studied by a pathologist’, explained Professor Quenby two weeks before Faith gave birth to baby Isla. 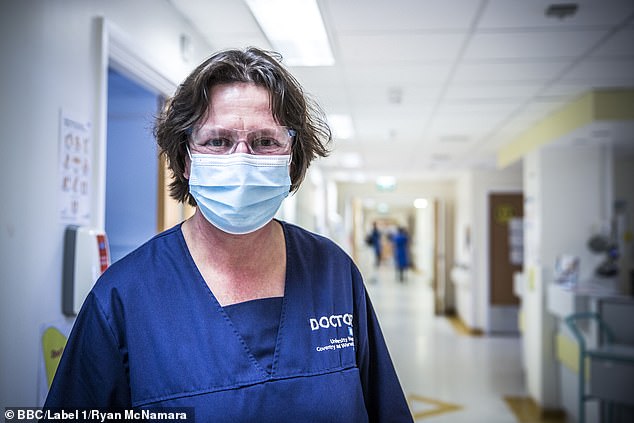 During her second pregnancy, she was treated by Consultant Obstetrician Professor Siobhan Quenby at University Hospital Coventry & Warwickshire 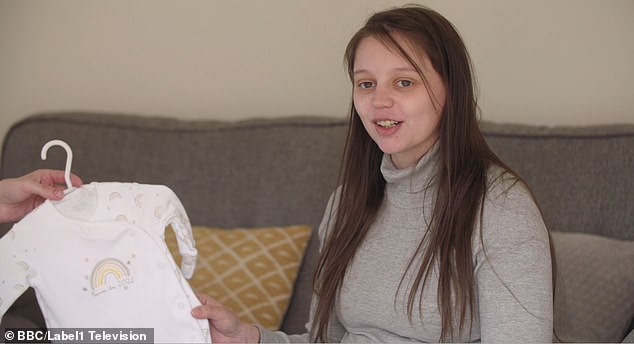 Faith was delighted when she was told her baby was growing ‘brilliantly’, saying that while she was ‘scared’, she was ‘happy her baby was okay. Pictured, Faith at home ahead of giving birth to Isla

‘We then tested her blood and her tests came back as normal so she’s quite a difficult case. There’s very little research on it and the reason for that is it’s quite rare.’

‘As long as there’s a heartbeat and there’s something going through the placenta’, said Faith. ‘For now we know, the rest of it can be dealt with. So as soon as we see that we breathe a little bit then’.

A scan showed that the baby had been developing normally, and Professor Quenby explained that she wanted to induce Faith’s labour at 37 weeks, when the baby was fully developed.

‘The problem with that plan is she’s going to be very anxious from now onward’, she said, ‘Because she lost a large baby at this time, so the point of the consultation today would be to look at the scan results and have another discussion about when we’re going to start labour off.

There is no method to evaluate the risk of adverse outcome in subsequent pregnancies, or effective prevention.

Very little research has been done into the cause of or treatment for MPFD.

‘What I don’t want her to do is have a live baby that then has to be admitted to the neo-natal unit, the vast majority of babies that go there do live but everybody can see how much it takes for that to happen.’

Faith was delighted when she was told her baby was growing ‘brilliantly’, saying that while she was ‘scared’, she was ‘happy her baby was okay’.

But Professor Quenby explained that induced labours come with risks: ‘The very difficult balancing act we have is the earlier we deliver her baby would prevent these kind of still births happening, but then we are putting the baby at risk of other things.

‘So when I’m making these decisions. I’m not just thinking about the here and now, it’s also about the long term welfare of the child’.

Visiting the hospital a week before she was induced, Faith expressed concerns about her pregnancy, revealing her she’d had a ‘relatively normal pregnancy’ with Grayson.

‘All of the scans said he was fine’, she said. ‘There was no indication to say there was anything wrong.’

She went on: ‘I was at work and they were trying to find a heartbeat and obviously couldn’t find one. One midwife turned into three and then the doctors keep multiplying and before you know it you have some stranger trying to console you, saying they’re sorry and there’s nothing they can do.

‘This doctor, bless her, I was just begging her to tell me that she got it wrong, she was wrong, but she couldn’t tell me that.’

Paramedic Aaron was at work when his partner called him to tell him the devastating news.

‘Faith was on the phone absolutely distraught, understandably,  saying “He’s gone” and I was saying ‘What do you mean? How can that happen? Why aren’t they doing anything? But it was too late.

‘Your whole world kind of implodes and you just don’t know what to do, you can’t imagine it at all. There’s no way to describe the feeling when they tell you something like that.’ 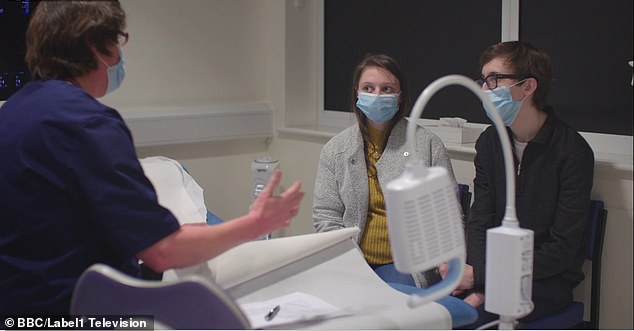 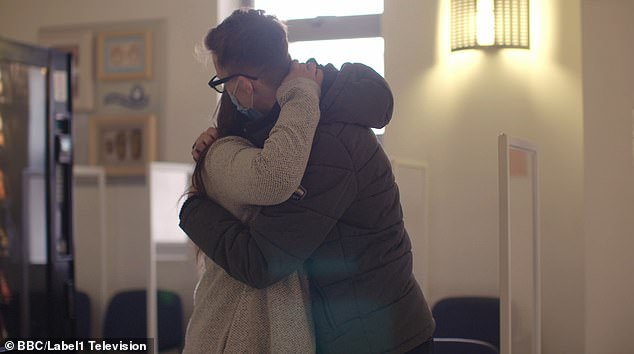 Faith added: ‘I always turn over in bed and expected there to be a baby there and there wasn’t or I’d have dreams where I would wake up for him crying and he wasn’t there.’

The couple have a memory box for Grayson and say they plan to share memories of their first pregnancy with Isla when she’s old enough.

‘I’m not going to pretend it didn’t happen and we’ll always refer to Grayson as her big brother’, said Aaron. ‘It would be nice to show her these when she’s old enough to understand.’

Faith said that it was a ‘very anxious time’ for the couple, revealing that she’d gone to the hospital for a check up just two days before she lost her first pregnancy.

‘People expect at this point that nothing will go wrong’, she said. ‘Baby will be strong as they need to be and have everything if they need it. They don’t expect it, but we’re proof that it happens and all of this is a reminder that it can still go wrong.’ 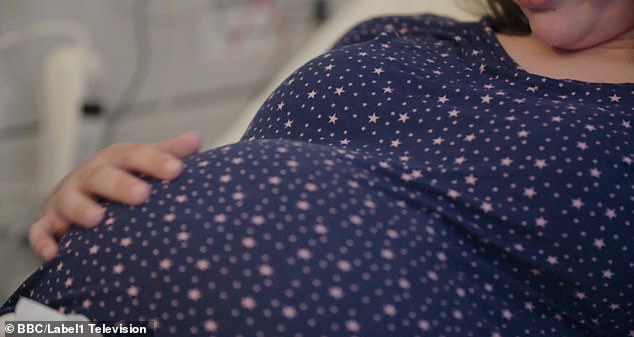 Faith, pictured before giving birth to Isla, said that it was a ‘very anxious time’ for the couple, revealing that she’d gone to the hospital for a check up just two days before she lost her first pregnancy 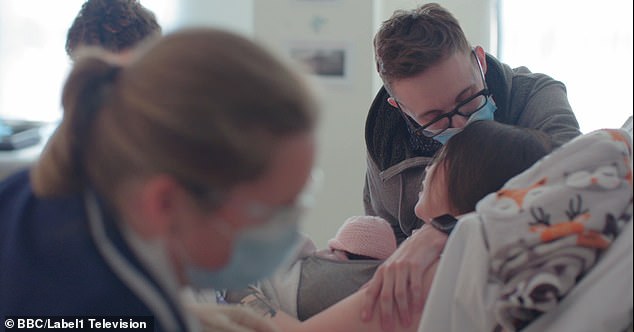 A CCG and scan on the days leading up to Faith’s labour showed that baby Isla had dropped and was healthy, however the mum-to-be was terrified and burst out into tears after learning she would have to be induced alone due to Covid restrictions.

‘I’m sad at the moment’, she said. ‘I cant think about anything going wrong, you can deal with anything when you have someone with you.

‘You’ve got to try and be strong, I’m scared it’s going to happen again. I don’t think I could lose another baby.’

Waiting for his partner outside the hospital, Aaron added: ‘I know she’s struggling. A lot of the memories from Grayson’s pregnancy aren’t positive at all, especially given the outcome.

‘It’s just getting out of that negative mindset and trusting the people looking after faith and little one.’

Despite the couple’s fears, their baby was born healthy weighing six pounds, with the couple leaving the hospital three days after her birth.

Hospital airs on BBC2 on Tuesday at 9pm