The easiest crowd-pleasing dinner yet: Top chef shares how to make delicious beef noodles you can make in a ‘flash’

A young chef has shared his simple recipe for homemade beef stir fry noodles he said can be whipped up for dinner in ‘a flash’.

Melbourne foodie, Moran Hipworth, gave fans a step by step guide on how to make his delicious and simple noodles using beef, noodles, greens and a range of fragrant sauces, herbs and spices.

In clip to TikTok, the 21-year-old pastry chef starts with the beef marinade where he combines the meat in a bowl with soy sauce, oyster sauce, bi-carb soda, corn flour, five spice, salt and pepper.

Scroll down to watch video 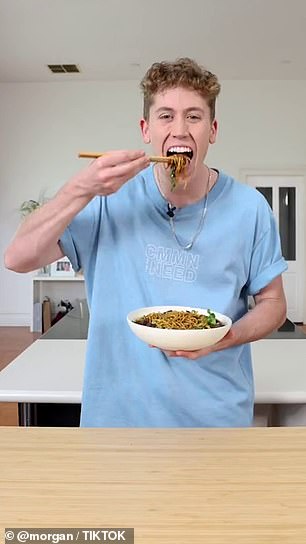 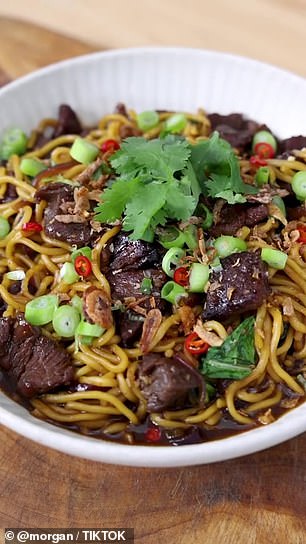 Melbourne foodie, Moran Hipworth (pictured left), gave fans a step by step guide on how to make his home made beef noodles

He mixes the contents of the bowl to make sure the beef is fully coated in the sauce and flour and sets aside.

‘In a hot wok with some oil fry off the onions, ginger, chilli, lemongrass, spring onion and garlic,’ Morgan continued in the clip, sautéing until the onion is soft and sets aside.

He then adds the marinated beef to the wok and fries on both sides until golden brown then returns the onion to the pan along with cooked noodles and sautés to combine.

Morgan said you only need to marinade the beef for the time it takes to sauté the onions but for maximum flavour, set aside for an hour. 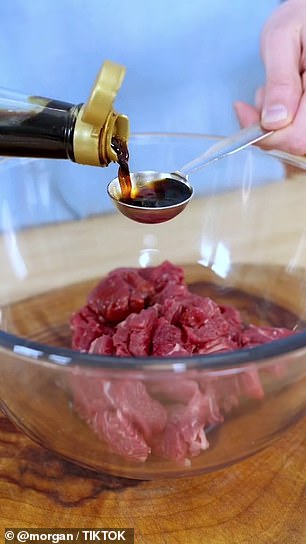 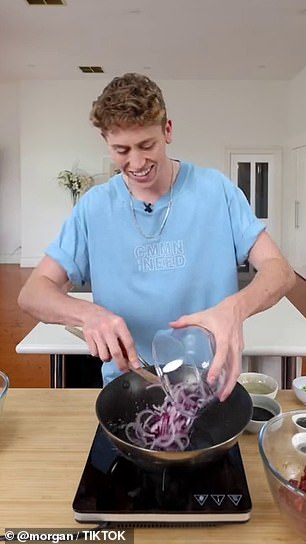 The 21-year-old pastry chef starts by marinating the beef in sauces and corn flour then satues onion, onions, ginger, chilli, lemongrass, spring onion and garlic in a hot wok 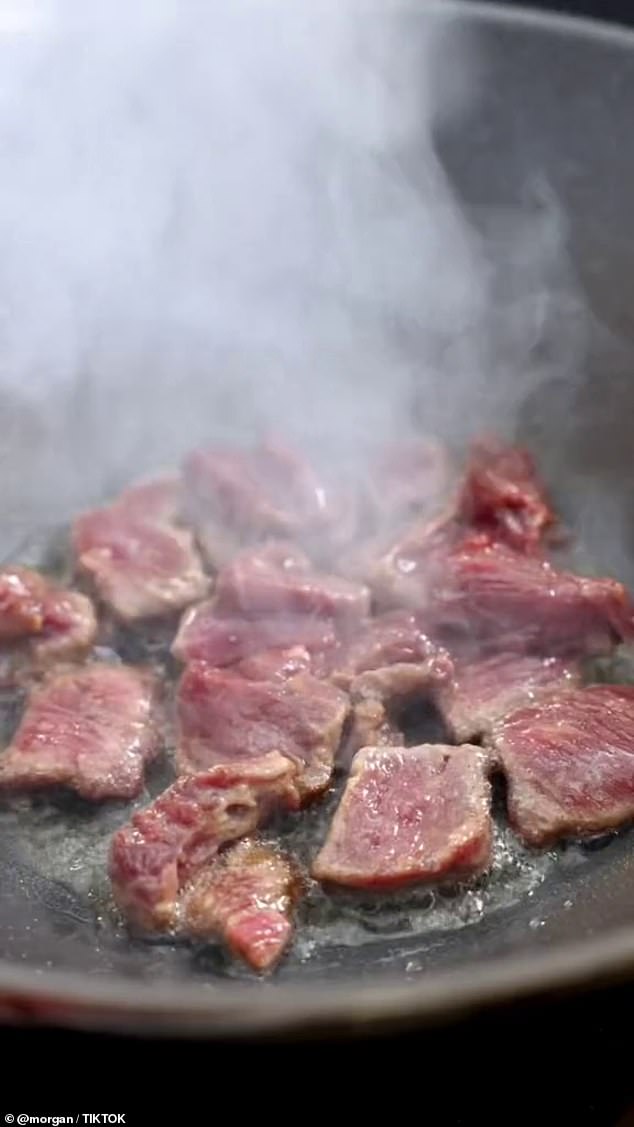 While the stir fry is cooking, Morgan then pours in soy and oyster sauce as well as some kecap manis which is a thick, sweet soy sauce.

He adds chopped up Chinese broccoli and stirs to combine, frying over high heat for two to three minutes until cooked.

‘Now its time to serve – garnish with spring onion, chilli, crispy shallots and coriander,’ he said. 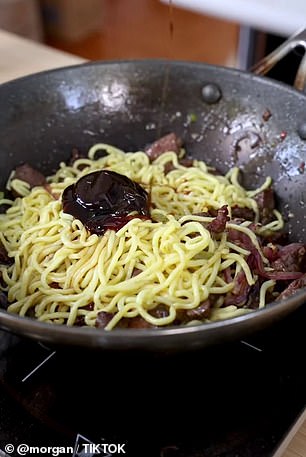 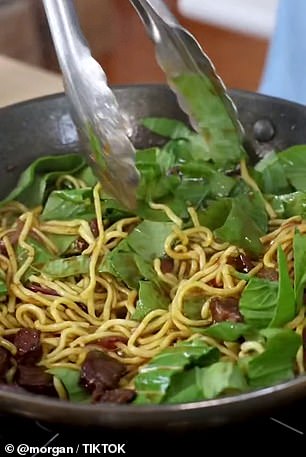 While the stir fry is cooking, Morgan then pours in soy and oyster sauce as well as some kecap manis which is a thick sweet soy sauce and chinese broccoli and cook for two to three minutes 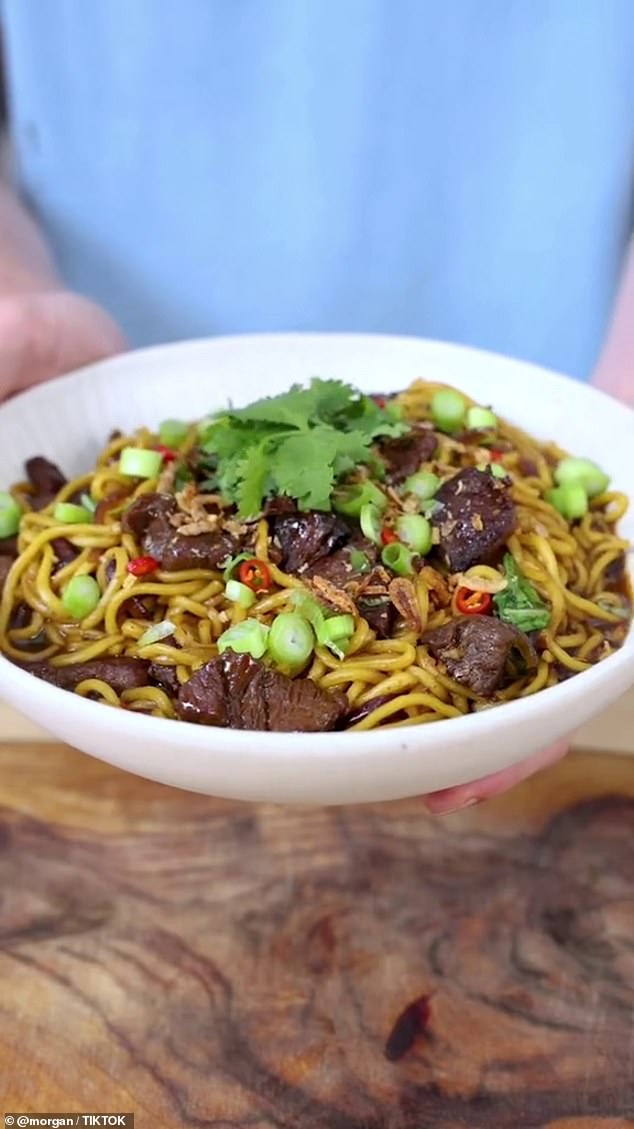 ‘Now its time to serve – garnish with spring onion, chilli, crispy shallots and coriander,’ Morgan said in a TikTok clip

For the stir fry:

1-2 birds eye chilli (depending on your preferred heat level)

400 g Hokkien noodles, cooked in water as per manufacturer’s instructions

1. In a bowl combine all the marinade ingredients, mix and set aside.

2. In a wok over medium-high heat add half the oil and the onion, ginger, chilli, lemongrass, spring onion and garlic.

4. Add the remaining oil and stir fry the beef over high heat until browned.

5. Return the onion mixture to the wok along with the noodles and stir fry for a minute.

6. Add the remaining stir fry ingredients and cook for 2-3 minutes.

7.  Remove from the heat and serve immediately, garnish with the spring onion, chilli, shallots and coriander.

The simple and delicious recipe impressed hundreds of his fans and attracted a throng of positive responses.

‘Oh my goodness, you’ve absolutely done it again Morgan…so easy so delicious and so enticing,’ one viewer said.

‘Words cannot describe how much we want this,’ another wrote.