National stevedoring company Patrick has asked the industrial tribunal to terminate its pay deal with 1081 of its wharfies, escalating a major dispute at one of only a few companies that unloads containers full of imports coming into Australia ahead of Christmas.

The move brings the players of the 1998 Waterfront Dispute – Patrick and the Maritime Union of Australia – into a significant conflict at a time when ports locally and overseas are grappling with huge demand because of the coronavirus pandemic. 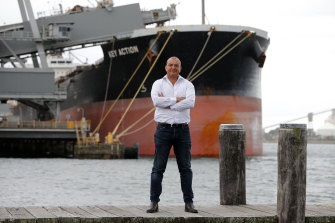 Patrick CEO Michael Jovicic said the company was hamstrung by the union.Credit:Darren Pateman

If the move is successful, the stevedores will lose the pay and conditions they have negotiated for years and go back to minimum industry standards unless a new deal is negotiated in the six months Patrick has promised to retain pay and leave rules after any termination.

The company says it has tried for almost two years to reach a new deal with the union covering its port facilities in Melbourne, Sydney, Brisbane and Fremantle but has been stymied by unreasonable and unproductive demands, leaving its business and customers suffering.

During that time there had been 220 instances of industrial action, including strikes, the company said. “Enough is enough,” said Patrick chief executive Michael Jovicic.

“Our market share and business operations have suffered due to this relentless industrial campaign by the MUA and their insidious ‘jobs for the boys’ stance,” he said.

“We are at the end of the road and need to have an agreement with our employees that works for our customers, and that allows us to remain competitive in the future market.”

Maritime Union national secretary Paddy Crumlin called Patrick’s move an arrogant, bullying, intimidatory attack on its workers that showed why an agreement had not been reached yet.

“It is being done in such a way as to try to defame the workforce in a most disgraceful fashion by distorting public perceptions of a legally sanctioned bargaining process,” Mr Crumlin said.

“The disagreements between the two parties are easily resolved and have been achieved within the industry with other stevedoring companies without them resorting to this type of character assassination.”

Among the enterprise agreement provisions Patrick says will be removed are rules that require it to effectively get the union’s approval for new hires, rather than hiring on merit alone.

“We have presented the MUA with an attractive national offer on top of their already very generous agreement including a 10 per cent pay increase across four years, coupled with protections addressing concerns over the use of casuals and job security,” Mr Jovicic said.

The other major port operators, DP World and Hutchison Ports reached deals earlier this year with the maritime union, which is a part of the much larger Construction, Forestry, Maritime, Mining and Energy Union.

University of Sydney labour law Professor Shae McCrystal said the Fair Work Commission can terminate agreements where they are past their nominal expiry date, and termination is in the “public interest”.

Professor McCrystal said termination was “quite a significant threat” because even the spectre of it put employers in a more powerful bargaining position.

“MUA members are no strangers to this type of behaviour from Patrick, who should return to the bargaining table and respect their workers,” Ms McManus said.

Attorney-General Michaelia Cash said the government was concerned about the damage industrial action could do to the economy but made clear the matter was ultimately for the independent Fair Work Commission and the parties.

“Just when communities are coming out of lockdowns and businesses are reopening their doors, this industrial action could not come at a worse time,” said Senator Cash, who is also industrial relations minister. “This action will be felt in Australia’s two most populous cities as they emerge from prolonged lockdowns, only to be hit by more disruption and economic harm.”

Former prime minister John Howard described the 1998 Waterfront Dispute as “the most bitterly fought domestic issue of my whole time as prime minister”. That year Patrick sacked its 1400 unionised workers and replaced them with contracted workers.

The Howard government backed the move, which the company said was essential to increase productivity and stop the union controlling the wharves.

After a bitter campaign of sometimes aggressive pickets and legal action, the company ultimately kept many of its workers on and the union agreed to efficiency improvements.