When the Coalition first committed to introducing a Commonwealth integrity commission in December 2018, it promised the new body would have the “teeth, resources and proper processes that will protect the integrity of Australia’s Commonwealth public administration”.

But the signs were emerging even then of Prime Minister Scott Morrison’s reluctance to fully embrace the idea, and a tendency to politicise the process.

He declared at the time that the body he was proposing would “avoid the serious failings of state-based integrity bodies that on too many occasions have proved to be ‘kangaroo courts’ … and being little more than a forum for self-serving mud slinging”. That was an outrageous slur on state bodies – a slur he repeated this week about NSW’s ICAC – that showed a prime minister undermining key institutions on which a healthy democracy rely. 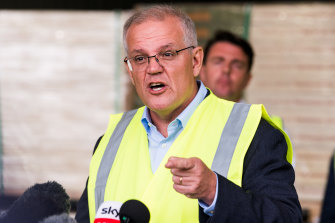 This week, he finally abandoned his pledge to set up a corruption watchdog at all, nonsensically pointing the finger at Labor for not supporting his preferred plan without amendment.

Government accountability and integrity are not just nice things to have; they are vital for citizens in order for them to have faith in our democracy. There are reasons to be concerned about democracies around the world, and Australia is not immune, with increasing public cynicism about whether our political system serves the people well. Morrison has responded to those legitimate concerns with cynicism of his own.

Despite his promise before the last election, the government has failed to commit enough political capital to ensure that the establishment of an integrity commission with the powers it needs to have credibility. It has also failed to prosecute donation reform, another area in which the public is right to be sceptical about the influence of donors in our political system.

It comes after a series of policy issues, pursued by The Age with rigour, including sports rorts, the car park debacle and the general pork0barrelling involved in community grants. Public money must be used in the public interest, with independent oversight, and it must not be overseen by ministers who have ultimate authority to funnel grants money for political motives. It is time this system ended.

The Coalition’s integrity commission proposal was never up to the task. It has been roundly criticised by integrity experts and lawyers as too weak to root out corruption. The government proposed a commission with two divisions – one for public officials and one for politicians – with no public hearings for investigations into politicians and no ability for the commission to launch its own inquiries or act on anonymous tips from the public.

Earlier this year, the government’s reluctance to face up to the legislation’s shortcoming became apparent when, after receiving 333 submissions to an exposure draft bill released in November 2020, Attorney-General Michaelia Cash admitted the government had not made a single change.

There is much discussion in this campaign about the lack of policy differences between the major parties, but Labor’s policy in this area is different, and clearly superior. We would need to see the details of Labor’s bill, but its principles show a greater commitment to establishing an integrity body that has the powers it needs. Anthony Albanese has pledged to give the commission the authority to hold public hearings, initiate its own inquiries and investigate matters that occurred before the commission’s creation.

The Age does not normally endorse one party over another until the end of the campaign. But we would find it extremely difficult to support the return of this government unless it rethinks its approach to integrity and accountability issues, including an integrity commission and donation reform. Governments have a broader role than pursuing their agenda, which is their right. Elected politicians are the custodians of our democracy , and they must uphold our institutions and maintain and restore faith in them.

The Age has campaigned on issues of accountability and transparency for many years, at a state and federal level. This should not be a partisan issue. Every state and territory government in Australia has an anti-corruption body, established and supported by both sides of politics. They are not perfect, and if they need reform, so be it, but they have exposed practices and behaviours that need to be exposed for a democracy to function well. The federal government is the odd one out, and this is the election where that must, finally, change.