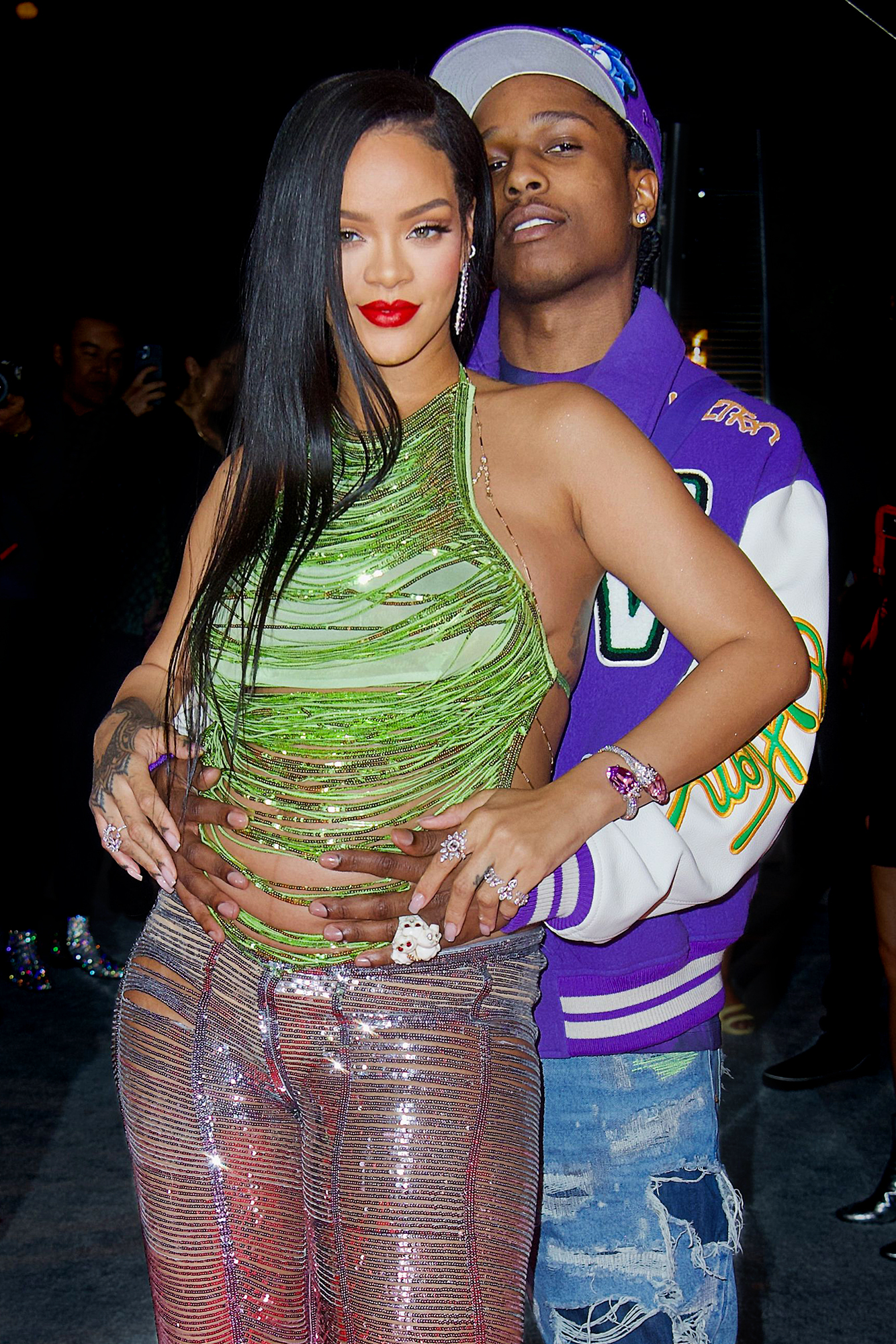 Putting the rumors to rest? After ASAP Rocky was the subject of cheating allegations during girlfriend Rihanna’s pregnancy, the pair showed that they are still going strong despite split speculation.

Rihanna and ASAP Rocky: A Complete Timeline of Their Relationship

Rihanna, 34, and Rocky, 33, were photographed arm-in-arm arriving at the airport in Barbados on Friday, April 15, according to photos obtained by TMZ. The expectant “Diamonds” songstress donned a colorful, strapless dress as she held hands with and cuddled up to her beau.

The pair were the subject of breakup rumors one day earlier after reports alleged that the New York native had cheated on Rihanna with Amina Muaddi, a designer for Fenty. While the couple — who announced earlier this year that they are expecting their first child — have yet to address the speculation, Muaddi fervently denied the allegations.

“I’ve always believed that an unfounded lie spread on social media doesn’t deserve any response or clarification, especially one that is so vile,” the fashion designer wrote via her Instagram Story on Friday. “I initially assumed that this fake gossip — fabricated with such malicious intent — would not be taken seriously. However in the last 24h I’ve been reminded that we live in a society that is so quick to speak on topics regardless of factual basis and that nothing is off limits. Not even during what should be one of the most beautiful and celebrated times in one’s life.”

She concluded her lengthy social media statement: “While Rih is continuing to live her serene, best dressed pregnancy life and I go back to my business — I wish everyone a beautiful Easter weekend.”

Us Weekly previously broke the news in February 2020 that the Oceans 8 star was “hooking up” with Rocky before they officially confirmed their romance nearly one year later. The twosome announced Rihanna’s pregnancy with a stylish maternity shoot in January as their relationship continued heating up.

“ASAP is obsessed with Rihanna and feels he has never loved her more than when she’s pregnant,” a source exclusively told Us in January. “They’re both very excited to be parents. … Rihanna has wanted to be a mother for many years now and she’s so thrilled it’s finally happening.”

Rihanna’s Quotes About Pregnancy, Wanting Kids Over the Years

While the happy couple have been excitedly preparing for their new arrival, the Barbados native has been vocal about her motherhood journey.

“I wouldn’t say [we were] planning [to start a family],” she revealed during her Vogue cover story, which was published earlier this week. “But certainly not planning against it. I don’t know when I ovulate or any of that type of s–t. We just had fun. And then it was just there on the test. … I called him inside and showed him. Then I was in the doctor’s office the next morning and our journey began.”

She continued: “I’m certainly not gonna let [not being married] get in the way of me being a mom. They’re going to teach me more than I could ever teach them. And I want them to go for it. I want to see who they are in the world, who they become. Because I’m just here to keep them on the rails — a passenger as much as the driver.”