Cool in camel! Queen Letizia of Spain is elegant in tan coat as she attends meeting at Spanish Federation for Rare Diseases in Madrid

Queen Letizia of Spain looked effortlessly chic as she wrapped up warm in a camel coat in Madrid today.

The European monarch, 50, was pictured arriving for a meeting at the Spanish Federation for Rare Diseases in the country’s capital city.

The mother-of-two opted for an elegant long-line piece of outerwear, which she wore over a pair of black-and-white checked trousers.

She then paired this with a tan knit, pointed pumps and a sleek black leather handbag. 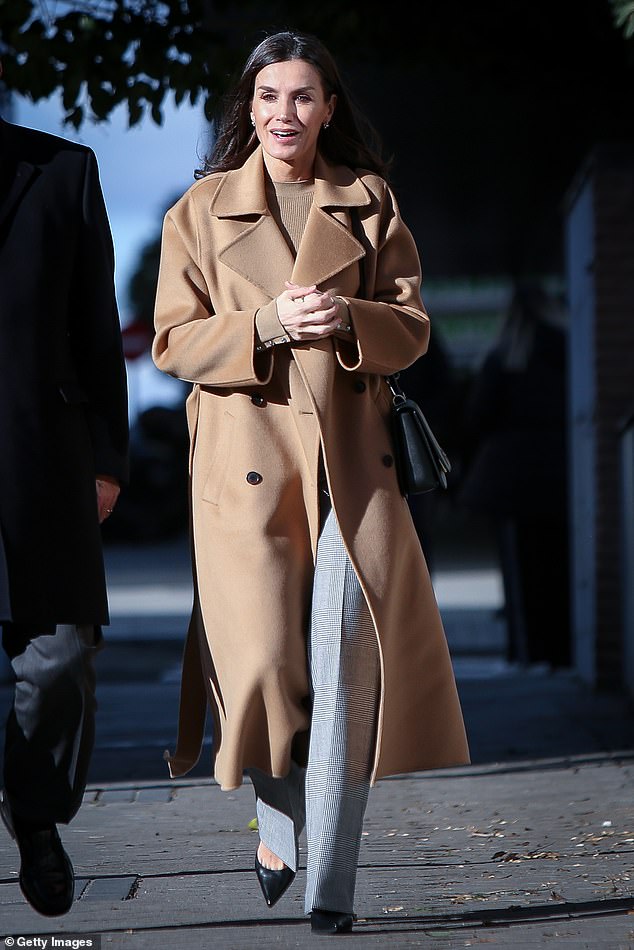 Queen Letizia was effortlessly elegant in a camel coat, checked trousers, tan knit and pointed pumps for her engagement at the Spanish Federation for Rare Diseases in Madrid today

Keeping her makeup natural and radiant, Letizia styled her shoulder-length hair straight for her engagement today.

She then finished off her ensemble with some pretty gold earrings.

The Queen of Spain works closely with the Spanish Federation for Rare Diseases – and attended their 25th anniversary celebration last year.

Over the weekend, the Queen of Spain flew to Athens with husband King Felipe to attend King Constantine II of Greece’s funeral. 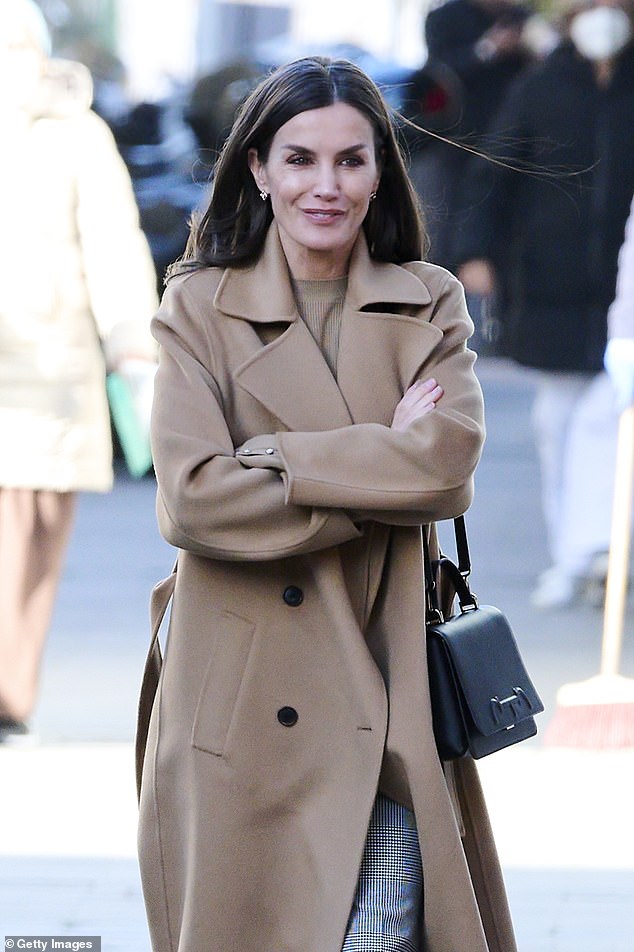 The European royal, 50, completed her outfit with a tan rubbed knit and minimal black accessories 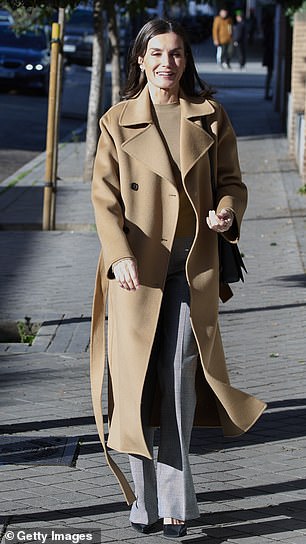 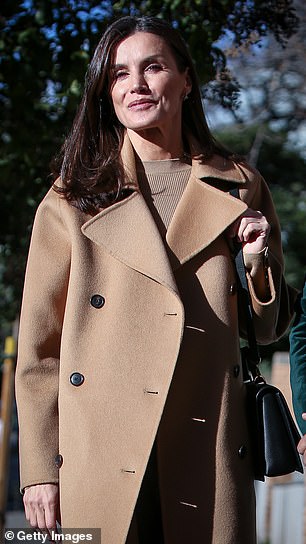 Queen Letizia of Spain cut a cool figure in a camel coat this morning, which she paired with black-and-white checked trousers 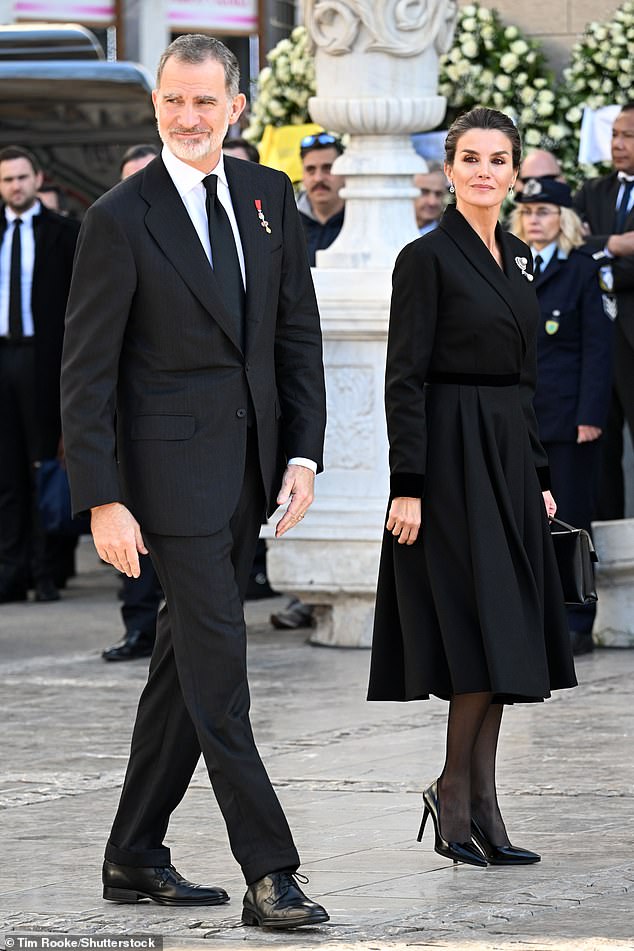 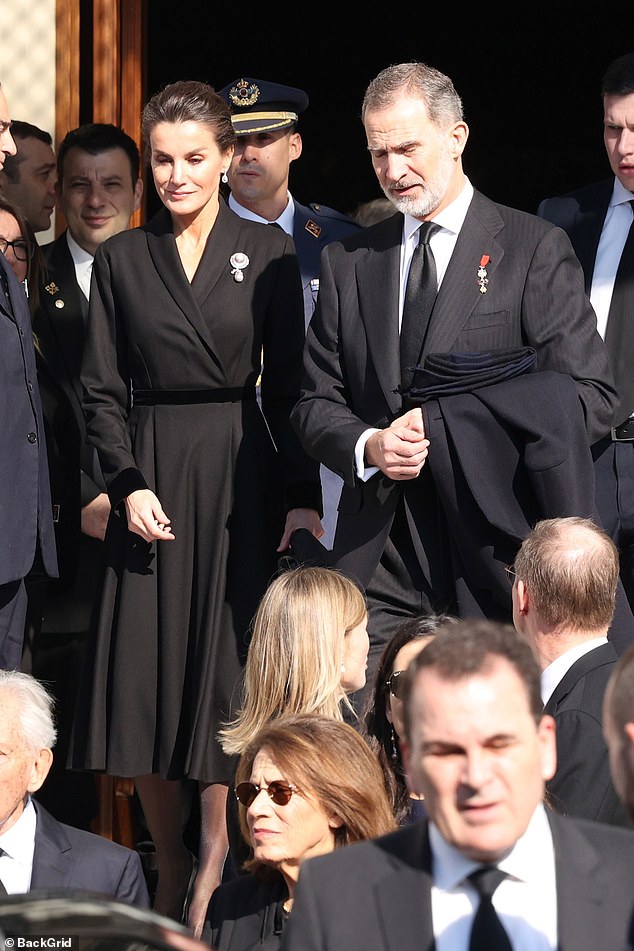 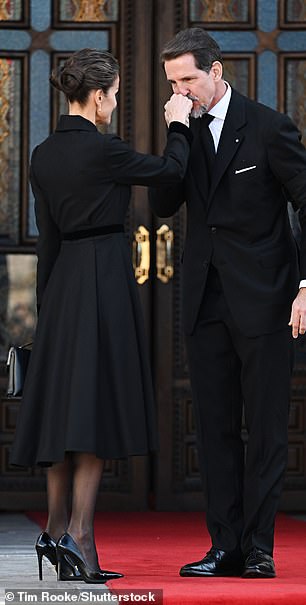 Left: Crown Prince Pavlos greeted Queen Letizia of Spain with a kiss on the hand ahead of the funeral. Right: The mourning son also gave the European royal a quick peck on the cheek

For the sombre occasion, Letizia styled her hair in a chic updo and opted for minimal jewellery to offset her tailored black coat dress.

The royal, whose father Jesús José Ortiz Álvarez and stepmother Ana Togores are both journalists, met her husband King Felipe when she was asked to interview him in her job as a reporter.

Letizia’s media career was a lengthy one and began with a stint at Asturian daily paper, La Nueva España.

Next came a role at ABC, a popular national newspaper that enjoys the third largest circulation in Spain, before spells at EFE and Mexican publication Siglo 21, which is based in Guadelajara.

Back in Spain a year later, she worked for the Spanish version of Bloomberg, a news channel and agency specialising in economics, before moving to CNN+.

By the time she met her husband-to-be, Letizia was working for popular TV channel 24 Horas, where she anchored the popular Telediario 2 evening news bulletin.