The three Sydney removalists who sparked an outbreak of COVID-19 across Melbourne have been referred to police as some residents of the locked-down apartment block they visited have called for them to be named and shamed for not wearing masks while working.

COVID-19 response commander Jeroen Weimar vowed “the wheels of justice will get them,” as contact tracers in three states struggle to get straight and timely information from the trio, who drove from Sydney last Thursday and made two stops in Melbourne before heading to South Australia. 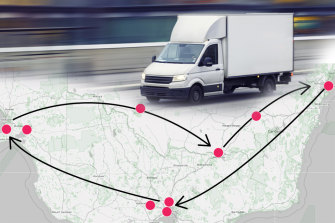 New exposure sites were revealed by South Australian and NSW authorities late on Wednesday and early on Thursday, days after the removalists were first interviewed by authorities.

The men stopped at a petrol station in Tailem Bend, in South Australia, on their way to Adelaide last Friday morning, then passed through the Murray River town again on the way back to NSW after being notified one of them was a close contact of a confirmed COVID-19 case.

It is unclear whether the men travelled via Victoria to head to Sydney, but NSW Health on Thursday revealed the men also stopped at a petrol station in Jindera, near Albury on the NSW-Victoria border, last Saturday.

They also stopped in Hay, Gundagai and Marulan before arriving back in Sydney. 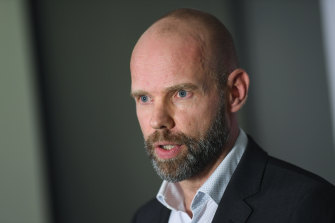 Mr Weimar has repeatedly expressed frustration with the men’s lack of transparency, but on Wednesday said authorities believed they had “squeezed as much information out of that rock” as they could.

The removalists arrived in Melbourne last Thursday on a special workers’ permit for freight drivers. Driving two trucks, they delivered furniture in the City of Hume and collected another load in the City of Maribyrnong.

They stopped at a petrol station and fast food outlet in Kalkallo, north of Melbourne, between 9am and 10am last Thursday. They dropped off the furniture at a Craigieburn address, then picked up furniture from the Ariele Apartments in Maribyrnong just after midday.

On their way to Adelaide, the trio stopped at a Ballan petrol station and fast food outlet between 5pm and 7pm, where they took a shower. Mr Weimar believes the men slept in their truck cabins.

“We want to do the right thing and I know the freight industry wants to do the right thing so we can keep food in our stores and do all the things we need to do – so they’re as disappointed as we are that we’re seeing, what I’d probably describe loosely as a rogue operator, who isn’t doing the right things and isn’t compliant with the restrictions,” Mr Weimar said.

“My beef is not necessarily with the individuals. I understand people have all sorts of individuals to deal with, but my beef is with an operator who doesn’t then comply and support the work of health authorities in three different states to get to the bottom of an important outbreak.

“I’m moving this on to our enforcement authorities and to other interstate jurisdictions, they can deal with that appropriately. I’m not judge, jury and hangman.

“The wheels of justice will get to them as and when they need to.” 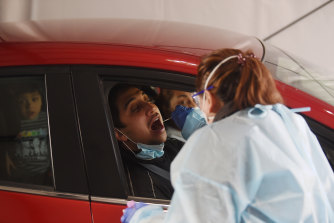 Huge queues of people turned up to be tested for coronavirus at Craigieburn on Thursday. Credit:Justin McManus

Victoria Police said it was assisting the Department of Health with their investigation and the company involved had been helpful.

“Up until this week we have been proud to say that the Australian removals industry has conducted well over 100,000 moves since the start of the pandemic without a single COVID-19 contact event,” Ms Hill said.

Premier Daniel Andrews said he expected police from Victoria, SA and NSW would investigate the trio for deliberately withholding information from contact tracers.

“The frustration in many respects is not that they perhaps didn’t wear their mask when they were unloading the truck, it’s that for quite a while they were very difficult and weren’t being necessarily forthcoming,” he said.

Terry Pattinson, a resident of the Ariele Apartments which have been locked down as a result of the exposure, passed the removalists carrying boxes through the lobby and was concerned they were not wearing masks.

“I think it’s really irresponsible. Particularly when they had allegedly come through with all the border permits. They should have been aware of what the protocols were down here.”

Mr Pattinson said the men were wearing casual clothes without logos. He did not see their removal truck.

“They crammed up the downstairs ground-floor lobby with a lot of furniture and really inconvenienced a lot of people who weren’t able to use the lift,” he said. He said some residents would like to know who they are “so we can name and shame them”.

“As Melburnians we’ve been through this many times over and it feels like groundhog day all over again. For us here, we’re just beside ourselves. Some people feel right on the tipping point. They’re really frustrated.“

Mr Pattinson said he and other residents of the Ariele building had originally been told they would be “released” on July 22, with the 14-day lockdown period taken from Thursday last week, when the Tier 1 exposure to COVID-19 occurred.

The lockdown was reset to Wednesday when it was discovered four residents had tested positive.

Mr Pattinson is fully vaccinated but said others were worried because they were young and hadn’t been eligible for vaccines.

His girlfriend and roommate, who live with him, also tested negative. He said he had ridden in the same lift as the removalists on Thursday. He had gone out on Saturday night with a group of friends, to a Maribyrnong pub and to venues in Chapel Street.

Mr Baddeley has not been vaccinated.