SARAH VINE: Sorry, but I really don’t mind if my son gets Covid

When my 16-year-old son asked me to buy him tickets for this year’s postponed Reading Festival, I was secretly rather hoping it would never happen.

If my daughter’s experience was anything to go by, this was one rite of passage he could do without.

She lasted about a day and a half before I was summoned to rescue her and her two best friends, the three of them exhausted, sunburned and perspiring enough illicit moonshine to get me arrested for drink-driving as we drove home in air-conditioned silence. 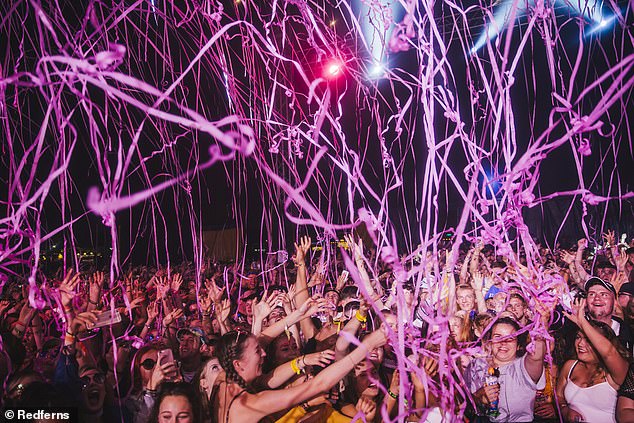 Now the final Covid restrictions have been lifted, festival season is well and truly underway

I had hoped not to repeat the experience with my son. Sadly, Reading, it turns out, is going ahead this month.

My son can’t wait, despite my protestations that he will hate it; meanwhile, my daughter is looking forward to something called Nass (much more sophisticated than Reading, which I am informed is ‘moist’, whatever that means).

Now the final Covid restrictions have been lifted, festival season is well and truly underway. There’s one problem: according to the parental grapevine, practically everyone who’s home from the Boardmasters festival in Cornwall last weekend has tested positive for Covid.

It’s basically been the equivalent of one of those chicken-pox parties we used to have as kids. Social media is awash with hungover teens brandishing positive lateral flow tests.

No doubt the same will happen after Reading, and other festivals, too. After all, there is no better breeding ground for a highly contagious virus than a load of sweating, snogging bodies falling drunkenly on top of each other. 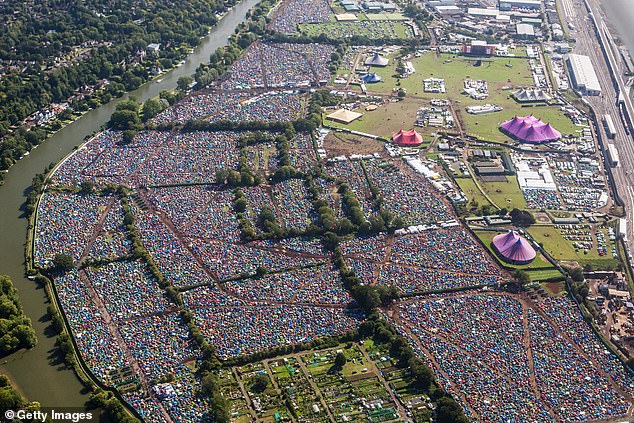 When my 16-year-old son asked me to buy him tickets for this year’s postponed Reading Festival, I was secretly rather hoping it would never happen

It is only a matter of time before the doom-mongers catch on and demand an end to all this cavorting. Already Professor Lockdown is warning about the dangers of children going back to school; it won’t take much for his colleagues — and the Government — to start predicting catastrophe.

But, much as I loathe festivals, I really hope they don’t. Because this was always going to happen. And it may as well happen now, when it’s summer and the threat from other infections such as flu is relatively low. It is just the price we are going to have to pay for life getting back to normal — and learning to live with the virus.

Because regardless of what the Prime Minister of New Zealand (who has shut down her country again over one positive case) seems to think, there is no such thing as ‘zero Covid’. And the truth is, all vulnerable adults have been vaccinated (or it they haven’t, that’s not the Government’s fault), so why can’t we just let the kids get it?

I know several friends’ teenagers who have had it this summer, and apart from being extremely annoying and driving their poor parents mad, the symptoms are minimal. 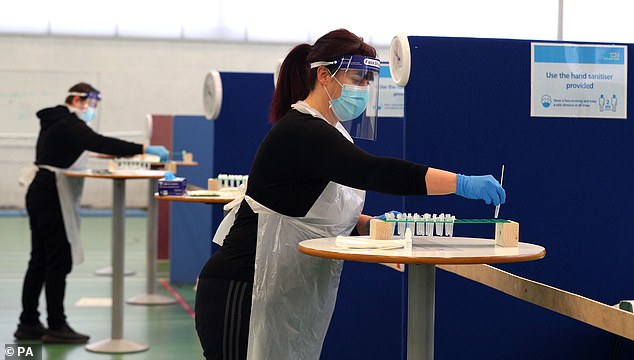 But, perhaps more importantly, none of their relatives have picked up the virus. The jab, for now at least, seems to be working.

Of course, nothing is perfect, and there are bound to be anomalies. But that is true of everything in life: nothing is ever 100 per cent safe.

So, much as I am dreading it, I am going to let my boy go to Reading. He’s already booked his first jab for next week, when 16-year-olds can have it. That should afford him a modicum of protection.

And if the worst that happens amid a sea of boozy, druggy teens is that he tests positive on his return, I’ll consider myself a lucky mum.

Seven NHS hospitals have halted operations for obese patients because of fears that the floors — built from a lightweight form of concrete used in the 1960s — might collapse.

Sobering to think that, back then, only 1 per cent of men and 2 per cent of women were classed as obese — compared with 27 and 30 per cent today.

Let the Garrick rot in peace

Every two or three years, some grande dame pops up and has a pop at the Garrick Club for its male-only members policy.

This time it’s Cherie Blair, who has backed (yet another) petition urging the Covent Garden club to mend its ways and, as Nigel Havers (himself a member) put it, ‘haul itself into the 21st century’. 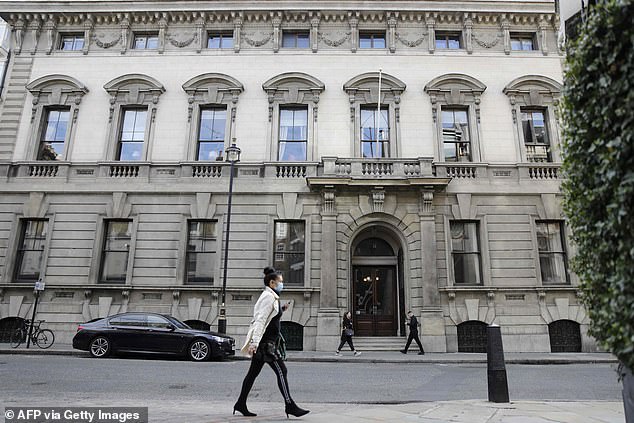 The Garrick is a marvellously eccentric, unique and thoroughly bonkers institution that has no place in the modern world

As someone who’s been a frequent visitor, all I would say is this: first, the joy of the Garrick is that it is not even vaguely in the 21st century, nor for that matter the 20th. Mid-19th, at a push, particularly when it comes to the waiting staff (I swear some of them sleep in coffins in the basement).

And second, why any woman would want to be a member is a mystery to me. Unless, of course, she is the sort of person who enjoys interminable conversations about grouse-shooting and obscure 18th-century politicians.

The Garrick is a marvellously eccentric, unique and thoroughly bonkers institution that has no place in the modern world. Which is why it’s so wonderful — and why everyone should leave it to rot in peace.

More from Sarah Vine for the Daily Mail…

I agree with Princess Beatrice that dyslexia can be ‘a gift’: my daughter is extremely dyslexic, and she is a total joy — or at least she is to me.

I can’t say her teachers would agree. Throughout her schooling she was made to feel ‘less than’ because she struggled with punctuation and spelling, as well as organisation and discipline.

She was the kind of child you would send upstairs to her room to fetch a jumper only to come back down half an hour later having fashioned a hat out of a pair of socks.

Sadly, that kind of eccentric brain function has very little place in mainstream schooling, which judges children less on their ability to think independently and more on their capacity to dot the ‘i’s and cross the ‘t’s.

Madge has got ageing licked

You have to hand it to Madonna: 63 and as joyously irreverent as ever, posing with her boyfriend — who, at 27, is only three years older than her daughter, Lourdes.

Fair enough, the plastic surgery is probably a stitch too far for my liking; but when it comes to growing old disgracefully, our Madge is Queen. 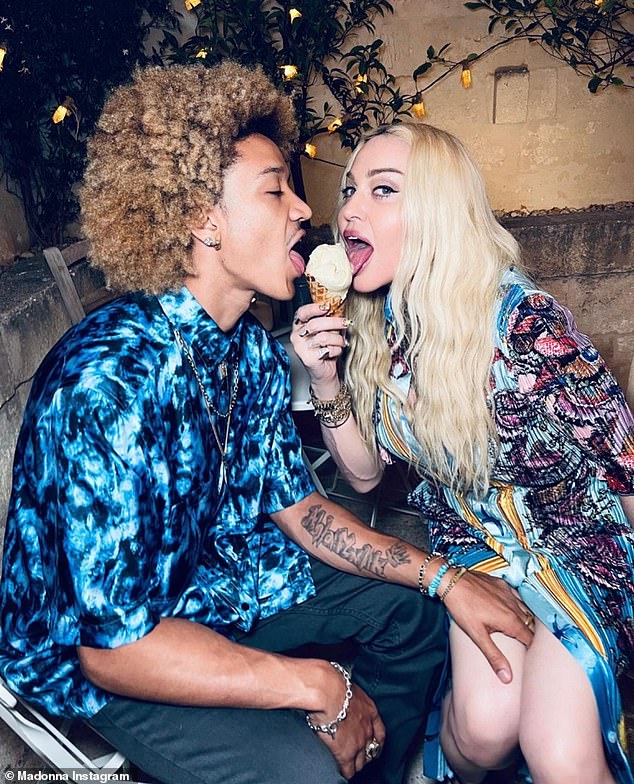 You have to hand it to Madonna: 63 and as joyously irreverent as ever, posing with her boyfriend

New research shows that young women are more likely to want cosmetic surgery after spending time on Instagram. I know how they feel.

I find that even a few minutes of scrolling through everyone else’s perfect houses, gardens, children, dinner parties, wardrobes, yoga poses, bathroom cabinets and holidays leaves me wanting not just cosmetic surgery, but an entire life transplant.

OK, enough Geronimo. If there’s one thing humanitarian disasters such as Afghanistan do, it’s bring perspective to our own lives.

We’re talking about an alpaca. Adorable, yes. Very sad if he does have to go. 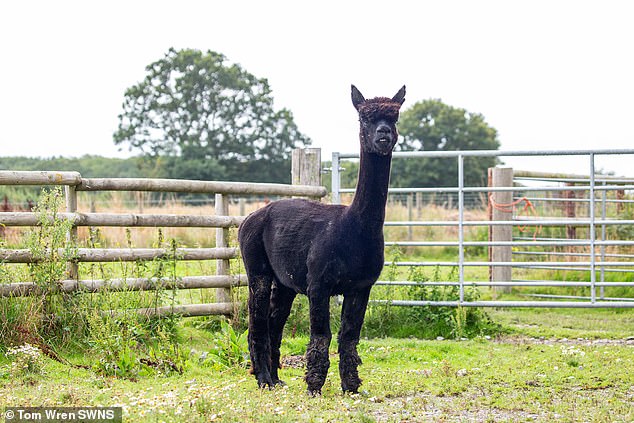 OK, enough Geronimo. If there’s one thing humanitarian disasters such as Afghanistan do, it’s bring perspective to our own lives

But not the same as thousands of women and children being deprived of their human rights.

Time to move on.

I would never criticise a minister for going on holiday: we all need a break, and there is no good time when you are running the country.

That said, the fact that Foreign Secretary Dominic Raab was away the week Afghanistan imploded just goes to show how little thought officials had given to the consequences of withdrawing our troops.

Either that, or they were genuinely taken by surprise. I’m not sure what’s more worrying.

Speechless Meg? If only

When I saw those awful images of people clinging to departing aeroplanes at Kabul airport, and witnessed stowaways plunging to their death, the first thing that sprang to mind was ‘I wonder what Harry and Meghan make of all this.’

Honestly, how is it that these two think every disaster is an excuse to serve up another nutritionally vacant word salad?

‘The world is exceptionally fragile right now’ — you don’t say?

‘As we all feel the many layers of pain due to the situation in Afghanistan, we are left speechless.’ If only!

It’s a crowded field, admittedly, but the award for insensitive self-obsessed celebrity of the week has to go to Lily Cole, for posing on Instagram in a burkha as the Taliban raged through Afghanistan. 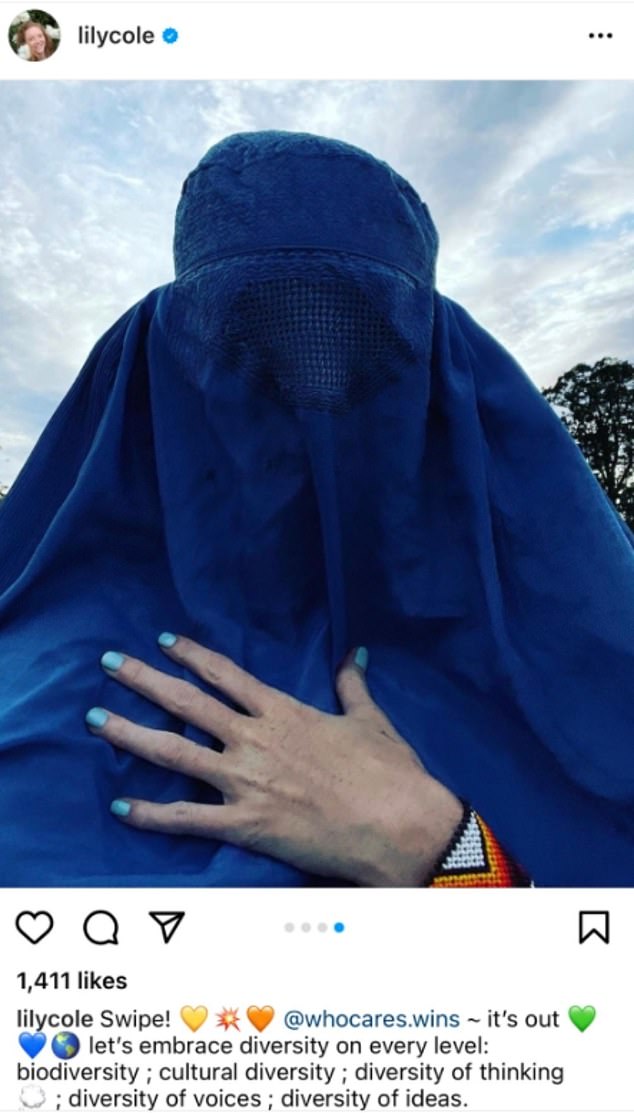 It may be just another fashion accessory to her, an opportunity to gain likes and followers, but, for many women, it is a symbol of appalling oppression.

As for her nail polish — blue to match — the Taliban have been known to cut off girls’ fingers for wearing it.

Not only offensive, but ignorant to boot.