A unanimous vote in the Senate calling for a royal commission on veteran suicide has heaped parliamentary pressure on Prime Minister Scott Morrison to establish one.

On Thursday Coalition senators voted with Labor, the Greens and independents to call on Mr Morrison to establish the inquiry, and the motion will now go to the lower house. 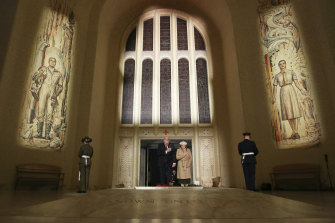 Prime Minister Scott Morrison and Jenny Morrison lay a wreath at the Tomb of the Unknown Australian Soldier in Canberra.Credit:Alex Ellinghausen

A government spokesman said Mr Morrison will reveal his position on calling a royal commission when the vote is put to the House of Representatives.

Newly-independent MP Craig Kelly, who left the Liberal party three weeks ago, said he would vote for it. Due to Mr Kelly’s defection, the Coalition now has to rely on Speaker Tony Smith’s deciding vote to make sure it doesn’t lose votes in the lower house.

“After extensive discussions with the veterans community, and the recent treatment of our special forces, if this passes in the Senate, I will be voting for its concurrence in the House,” Mr Kelly said.

Mr Morrison announced a permanent independent commissioner in February 2020 to investigate veteran suicide, giving the position the powers of a royal commission to probe the deaths of more than 400 serving and ex-service men and women who took their own lives since 2001.

Dr Bernadette Boss, a former magistrate and coroner in the ACT, was appointed to the role in September.