Just back from a surf, Andrew Traucki admits he feels fatalistic about sharks.

“I’m not going to do anything stupid,” he says. “But I’m just going to paddle out and have a surf and, quite frankly, if a shark wants to get me, there’s not much I can do about it.” 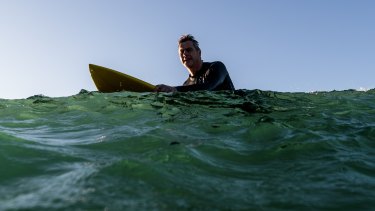 “People have come to me with shark films forever since The Reef and I’ve said no to all of them”: filmmaker and surfer Andrew Traucki.Credit:Brook Mitchell

Among surfers, that’s a common attitude.

But Traucki has a different relationship to the ocean’s apex predator: he is the writer-director of a new film about a killer shark, The Reef: Stalked, which has just opened in cinemas. It is part of a flourishing genre, the shark film, that perpetuates a myth started by Jaws almost 50 years ago that they are serial killers with a fin.

Ruthless, brutal and constantly hunting for their next human prey.

The Reef: Stalked features a shark terrorising four young women on a kayaking trip. It’s a sequel to Traucki’s 2010 film The Reef, about a shark menacing swimmers after their yacht sinks.

Valerie Taylor, the pioneering Australian scuba diver and documentary maker who shot underwater shark footage for Jaws with her late husband Ron, says hunting has depleted many species since that Hollywood blockbuster, especially the white, whaler and tiger shark.

“So many sharks wouldn’t attack anybody,” she says.

But at the same time there is more awareness of the need to conserve species, there is a surprising surge in the number of killer shark films.

There are likely to be almost as many this year as there are shark fatalities around the world.

According to Florida Museum’s International Shark Attack File, the global average is five “unprovoked” deaths a year – those not initiated by human actions – though it was up to nine last year. 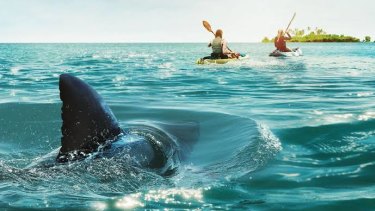 Two new British films have been released in the past seven months: Shark Bait (shark hunts young revellers on a drifting jetski) and Beneath the Surface (traumatised woman grapples with the shark attack that killed her father and sister).

There are another three from the US: Bull Shark (shark kills swimmers in a Texas lake), The Requin (couple have to survive sharks when their holiday villa is swept into the sea) and Sharkula (tourist community is threatened by a vampire shark).

As those plot summaries suggest, they are from a schlocky subgenre of the “killer creature” film that is characterised by photogenic casts, ominous music, cheesy taglines like “terror has teeth” and jump scares. 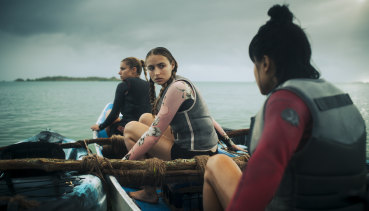 Allegory about domestic violence in the guise of a shark film: The Reef: Stalked.Credit:Thrills & Spills

Traucki says they reflect the lucrative worldwide market for B-grade shark films like 2013’s Sharknado, which has inspired five sequels, two spin-offs, two documentaries, a mockumentary and a video game. Call it the “Sharknado effect”.

“There’s definitely a group of people who’ll watch anything shark,” he says. “There’s another group who like shark terror-horror films.

“And there are people like me who like films that are very suspenseful and, whether they’ve got a shark or a serial killer is by the by. What they are is a great suspense film.”

In the same way that horror film Get Out was about racism and The Babadook was about depression, he calls The Reef: Stalked an “elevated genre” film about domestic violence.

Two of the women kayaking are traumatised by their sister being killed by her partner.

“I didn’t really want to do another shark film that was just going to be a shark film,” Traucki says. “I wanted to expand my horizons.”

While traditional shark films tend to attract men aged 18 to 25, he hopes The Reef: Stalked finds a young female audience and becomes a conversation starter for people who would not normally watch a drama or documentary about domestic violence.

But it’s a fine line given the shark in his film is still a relentless killer.

So, even given his higher intentions, isn’t he still contributing to the fear of sharks?

“People have come to me with shark films forever since The Reef and I’ve said no to all of them because they’re all just ‘shark kills people, body count, blah, blah, blah’,” he says.

“But with this one because I’m a surfer and I know that surfers call sharks ‘the man in the grey suit’ and I’d seen a great play called Lethal Indifference about domestic violence, I put those two together and that was enough to tempt me back into writing a script.

“One level it’s got this shark thriller engine but on another level it’s all about bonding and grief and domestic abuse.”

Find out the next TV, streaming series and movies to add to your must-sees. Get The Watchlist delivered every Thursday.