Businesses and consumers are bearing the brunt of “obsolete” tariffs, which will cost more to collect than they raise as Australia strikes new free-trade deals, a review of the system has found.

Productivity Commission research that puts pressure on the federal government to consider axing all remaining tariffs found the broad economic cost of collecting $1 in tariffs is likely to climb from between 57¢ and $1.59 today to almost $5. 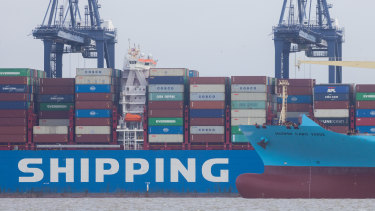 The federal government collects about $1.5 billion in tariff revenue a year, or less than 0.3 per cent of its total tax take.Credit:Bloomberg

The federal government collects about $1.5 billion in tariff revenue a year, or less than 0.3 per cent of its total tax take.

The commission, as part of special research into the assistance provided to businesses released on Friday, found there were growing costs from both policing the tariff system and its impact on the overall economy.

Compliance costs for businesses interacting with the system, including through the use of free-trade agreements to avoid tariffs, were expected to be up to $2.2 billion a year. Those costs, in large part borne by shareholders and workers, would grow as more trade deals were signed.

“The costs associated with tariffs will considerably exceed the revenue collected as new preferential trade agreements are agreed,” the research found.

“This report argues that Australia’s tariff system does not produce large distortions to production and consumption but does entail high (and increasing) compliance costs for businesses, which add to the costs of goods and services.

“Part of the compliance costs are passed on to consumers; others increase the costs of Australian exports. Yet other adjustments can occur through pressure on returns to shareholders and on wages.”

Trade agreements already in place, plus changes in government policy over the past half-century, mean about 90 per cent of imported goods come into Australia tariff-free. The remaining tariffs hit just 10 per cent of products, mostly on knitted cloth, car parts and furniture.

Tariff revenue is expected to fall further as Australia signs trade deals with Britain, India and the European Union in the coming years. 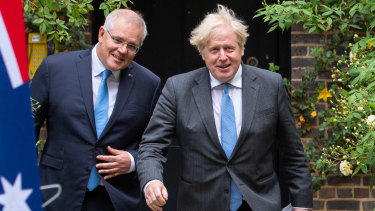 Former prime ministers Scott Morrison and Boris Johnson last year agreed on the principles of a free-trade deal between Australia and Britain. The deal will reduce tariff revenues by more than $100 million.Credit:Getty Images

The decline in revenue will mean the cost of raising tariffs on remaining goods will climb, reaching up to $4.81 for every dollar of tariff revenue.

The commission found businesses importing goods faced significant compliance costs, partly due to the various FTAs Australia is party to, as they “exert effort” to access preferential or concessional rates of customs duty. That effort can include changing how they make goods to qualify for a particular trade deal.

“Compliance costs come in two forms: the costs of the ‘paperwork’ needed to demonstrate eligibility for a preference or concession, and the costs of adapting production to make the imports eligible for the preference,” it found.

“Some foreign producers may adapt their production processes to meet preference eligibility. Australian businesses and consumers bear the increases in costs that this might involve when they are passed along the supply chain.”

Separate research from the commission found overall assistance to businesses jumped by 25 per cent, or $4.2 billion, in 2020-21.

Most of the increase was driven by new spending on COVID-related programs aimed at helping businesses through the pandemic.

Commission deputy chair Alex Robson said the pandemic and the global surge in protectionism over recent years meant there had to be a renewed focus on winding back government handouts.

“During the early stages of the pandemic, government assistance to Australian businesses and households rose. Many needed support at that time. The challenge is to roll back this assistance as conditions improve to avoid overheating the economy,” Robson said.

“The task now is to make sure every dollar of assistance is efficient, effective and remains absolutely necessary. This includes making sure we aren’t creating trade barriers through costly and obsolete tariffs.”