Sandi Toksvig has said the lives of LGBTQ+ people are ‘at stake’ after the Archbishop of Canterbury made a ‘horrible mistake’ and reaffirmed a 1998 Anglican declaration rejecting same-sex marriage.

In an open letter published on Twitter last night, the Danish-British author and comedian, who is gay, criticised Justin Welby who confirmed on Tuesday that the ‘validity’ of a resolution made in 1998 is ‘not in doubt’.

At the Lambeth Conference of that year bishops made resolution 1.10, that marriage is ‘between a man and a woman’, and that same-sex relationships are ‘incompatible with scripture’.

In a speech to more than 650 bishops this week, Justin Welby, head of the worldwide Anglican Communion, tried to appease conservative bishops while also insisting he will not punish churches who conduct same-sex marriages.

Amongst these were members of the Global South Fellowship, which includes all African evangelical congregations – including in countries where homosexuality is still illegal.

The Church of England forbids clergy to carry out same-sex marriages, while the Anglican Church in Wales and Scotland gives blessings to gay and lesbian relationships and the Episcopal Church in the U.S. has allowed same-sex marriage since 2015.

Ms Toksvig said Mr Welby has made a ‘mistake’, and offered to talk to him over coffee.

She described losing her faith due to the treatment of LGBTQ+ people by the church around the world. 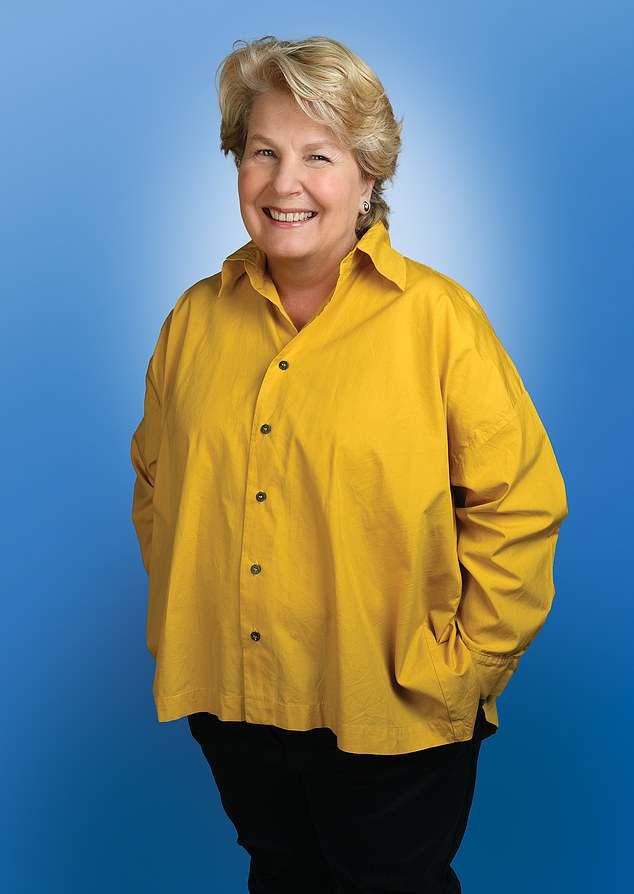 Sandi Toksvig is one of the UK’s most-loved comedians, and until recently presented QI and Stephen Fry left the programme 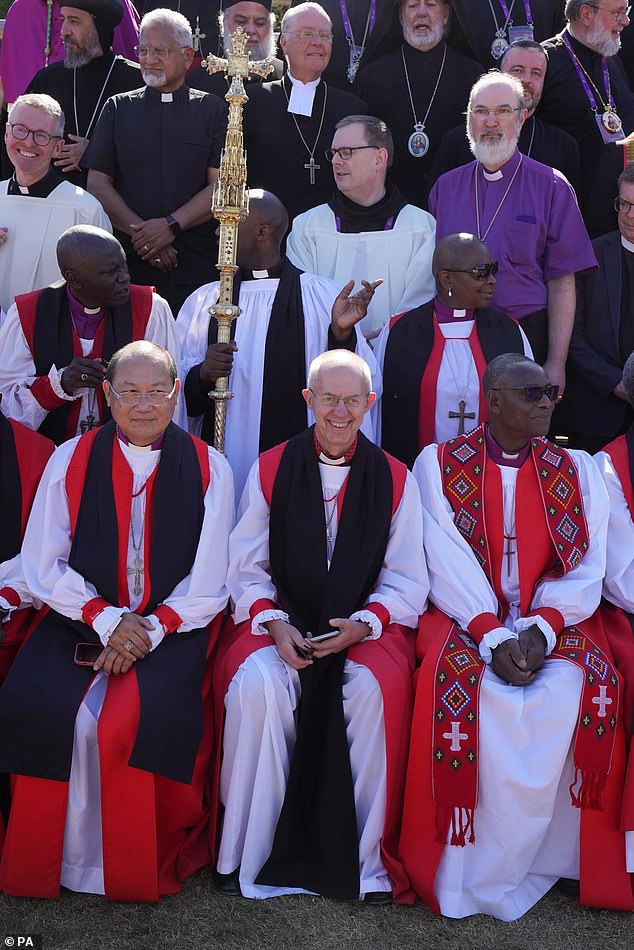 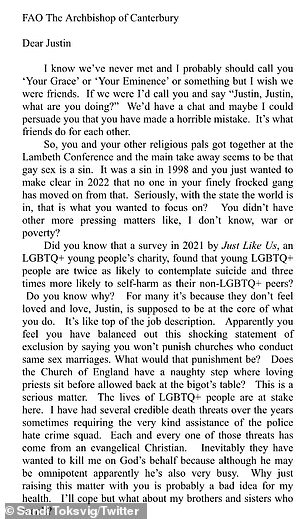 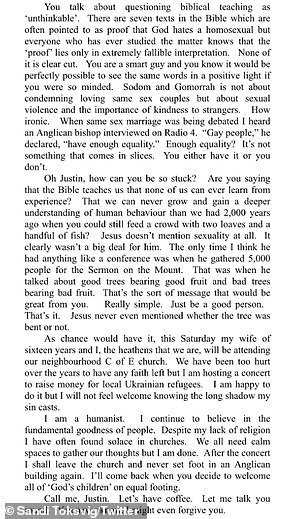 Sandi Toksvig tweeted a letter to the Archbishop describing her hurt and experiences as a gay woman, and appealing for him to meet her for coffee so they can discuss the issue

She wrote: ‘So, you and your other religious pals got together at the Lambeth Conference and the main takeaway seems to be that gay sex is a sin.

‘It was a sin in 1998 and you just wanted to make clear in 2022 that no-one in your finely frocked gang has moved on from that.

‘Seriously, with the state the world is in, that is what you wanted to focus on? You didn’t have other more pressing matters like, I don’t know, war or poverty?’

She drew attention to research by Just Like Us in 2021, which found that young LGBTQ+ people are twice as likely to contemplate suicide and three times more likely to self-harm than their peers.

Ms Toksvig said: ‘Do you know why? For many it’s because they don’t feel loved and love, Justin, is supposed to be at the core of what you do. It’s like top of the job description.’

The former QI host added: ‘This is a serious matter. The lives of LGBTQ+ people are at stake here.

‘I have had several credible death threats over the years, sometimes requiring the very kind assistance of the police hate crime squad.

‘Each and every one of those threats has come from an evangelical Christian. Inevitably they have wanted to kill me on God’s behalf.

‘I’ll cope but what about my brothers and sisters who won’t?

She said: ‘There are seven texts in the Bible which are often pointed to as proof that God hates a homosexual, but everyone who has ever studied the matter knows that the ‘proof’ lies only in extremely fallible interpretation. None of it is clear cut.’

She added: ‘Oh Justin, how can you be so stuck? […] Jesus doesn’t mention sexuality at all. It clearly wasn’t a big deal for him.’

Ms Toksvig said she and her wife will be in attendance at her local church on Saturday.

She said: ‘We have been too hurt over the years to have any faith left but I am hosting a concert to raise money for Ukrainian refugees.

‘I am happy to do it but I will not feel welcome knowing the long shadow my sin casts.’

She added: ‘After the concert I will leave the church and never set foot in an Anglican building again. I’ll come back when you decide to welcome all of ‘God’s children’ again.’

Mr Welby faced criticism for his attempt to please both sides, with one prominent Anglican saying he was ‘trying to ride two horses at once’.

Jayne Ozanne, a campaigner for LGBTQ+ equality within the church, criticised Mr Welby’s attempt to reaffirm the church’s traditional stance.

She said: ‘Archbishop Justin Welby is trying to ride two horses at once, which is impossible.

‘It would be funny if it wasn’t for the fact that one of the horses is trying to trample LGBT+ people underfoot!

‘I feel deeply angry that yet again priority has been given to saving a man-made institution over protecting LGBT+ people’s lives.

‘Let us be clear that Lambeth 1.10 encourages ‘conversion therapy’. It is a stick with which many will continue to be beaten and suffer around the world.’

Ms Toksvig’s comments have been praised and supported by celebrities including Lorraine Kelly, who described her letter as a ‘must-read’.

The Lambeth Conference is a meeting of Anglican bishops which is convened by the Archbishop of Canterbury once every 10 years. It is taking place at the University of Kent, Canterbury Cathedral and Lambeth Palace between July 26 and August 8.

The conference, which first took place in 1867 and is supposed to convene once a decade, is being held for the first time in 14 years, having been postponed by the pandemic as well as fears of divisions in the church.

In a letter to Anglican bishops written on Tuesday, Mr Welby said: ‘I write therefore to affirm that the validity of the resolution passed at the Lambeth Conference 1998, 1.10, is not in doubt and that whole resolution is still in existence.

‘The Call states that many Provinces – and I think we need to acknowledge it is the majority – continue to affirm that same-gender marriage is not permissible.

‘The Call also states that other Provinces have blessed and welcomed same sex union/marriage, after careful theological reflection and a process of reception.’

Speaking at the conference on Tuesday, the Archbishop added that he could not and would not punish churches for conducting gay marriages.

He said: ‘I neither have, nor do I seek, the authority to discipline or exclude a church of the Anglican Communion. I will not do so.’

1998: The Lambeth Conference issued resolution 1.10 which rejects ‘homosexual practice as incompatible with scripture’ and ‘upholds faithfulness in marriage between a man and a woman in lifelong union’. It says same-sex unions should not be legitimised or blessed.

1998: Shortly afterwards, about 150 bishops, including eight primates, issued an open letter to the LGBTQ community which pledged to work for their ‘full inclusion’ in the life of the church.

2002: The Diocese of New Westminster in Canada became the first Anglican Church to bless same-sex unions.

2003: Jeffrey John, a gay priest, was forced to withdraw from his post as Bishop of Reading by the then Archbishop of Canterbury Rowan Williams after backlash from conservatives about his appointment.

2005: Following the creation of civil partnerships, Church of England bishops released a statement that detailed their continued belief that marriage was only permissible between a man and a woman.

2008: Openly gay Bishop Gene Robinson, from the U.S., was not invited to the Lambeth Conference in England due to fears conservative bishops would boycott the meeting.

2014: When same-sex marriage was legalised in England the law contained protections to stop clergy who declined to marry a gay couple from being sued for discrimination.

2015: The Episcopal Church in the U.S. became the first Anglican Church in the world to formally allow gay marriage. Canada and Scotland have since followed.

2016: The Bishop of Grantham, Nicholas Chamberlain, became the first English bishop to come out as openly gay.

2019: It was announced that gay bishops would be invited to the next Lambeth Conference but their spouses and partners would not be, unlike the spouses of straight bishops.