Scott Morrison made his name in Australian politics by invoking the right to secrecy over public policy.

As immigration minister in 2013, overseeing Australia’s system of turning back asylum seeker boats at sea, he made sure it operated under a cloak of stealth by the simple process of refusing to reveal “on-water” or “operational” matters.

Now, his long dedication to secrecy has reduced Morrison – prime minister only three months ago – to a pariah within sections of his own party. 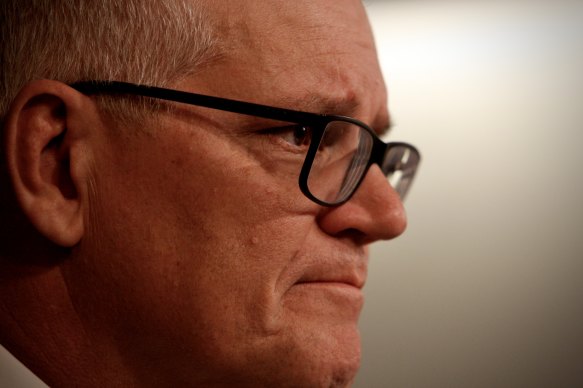 Scott Morrison may be the loneliest politician in Australia as this week ends.Credit:Dean Sewell

Revelations that as prime minister he covertly had himself granted full authority over five other ministerial portfolios by persuading Governor-General David Hurley to sign legal papers conferring those powers – some of which he claimed on Tuesday he didn’t recall, before regaining clarity on Wednesday to mount a stout defence of his actions – have all but dismantled his political legacy.

He may be the loneliest politician in Australia as this week ends.

His successor as Liberal leader, Peter Dutton, has said Morrison’s behaviour was wrong and he is prepared to support the Labor government to ensure it can never be repeated.

Those who once called themselves Morrison’s loyal ministers are now voicing anger and dismay either publicly or privately.

Prime Minister Anthony Albanese is making a political meal of the storm and is awaiting advice due on Monday from the solicitor-general on whether the ministerial appointments were legal.

Albanese has accused Morrison of undermining Australia’s democracy, running a “shadow government” and indulging in “the sort of tin-pot activity that we would ridicule if it was in a non-democratic country”.

Even Hurley, facing questions over his role in the matter, delivered a veiled swipe at Morrison over the decision to keep secret what critics have called a covert grab for power.

Morrison’s long-time ally, one-time flatmate, chosen frontbencher and fellow Pentecostalist Stuart Robert surprised observers by declaring on TV it was possible to judge that Morrison had been “unwise”.

This was among the mildest of criticisms to be heard either publicly or privately during the week, but Robert’s view was compelling because of history.

In the minutes before the Liberal Party chose Morrison as its leader in 2018, Robert prayed with Morrison that “righteousness would exalt the nation”, according to the 2019 book Plots and Prayers by journalist and political insider Niki Savva.

The controversy over the judgment of its most recent prime minister could barely come at a worse time for the Liberal Party, which is still grappling with the loss of government at the May 21 federal election, and finds itself outside government across most mainland states and territories.

However, former Morrison government minister, senator Jane Hume, and former federal director of the Liberal Party, Brian Loughnane, are expected to spare themselves the task of trying to comprehend Morrison’s behaviour as they conduct their review of the 2022 election result.

Hume says the latest revelations cannot be judged a factor in the election result because Morrison’s secret powers weren’t known during the election campaign.

“The matter probably won’t be relevant to our review into why we lost the election,” she says.

Meanwhile, state Liberal leaders can only hope the Morrison controversy won’t cruel their attempts to hold or gain political traction.

Dominic Perrottet’s Coalition government in NSW, facing an election on March 25 next year, has its own troubles. It is weighed down by a scandal involving the startling appointment of the state’s former deputy premier, John Barilaro, to a $500,000-a-year New York job as trade commissioner to the Americas.

The Barilaro appointment – which has since come unstuck – is currently gaining daily headlines, unhelpful to Perrottet’s government, as a parliamentary committee investigates the matter.

In Victoria, the Liberal opposition of Matthew Guy appears to be making no significant headway against Dan Andrews’ Labor government as the state prepares to go to the polls on November 26.

Guy’s plan to make integrity a major issue fell apart when his chief of staff, Mitch Catlin, was forced to resign after The Age revealed emails showing a plan (which was never enacted) to ask a major donor to pay Catlin’s private company about $100,000 in instalments.

In Western Australia, the Liberal Party has been reduced to just two MPs in the state’s lower house, losing its status as the opposition party.

The WA Liberals last month agreed on new preselection rules designed to try to break the stranglehold of powerbrokers, notably within a faction called The Clan, who boasted of their branch-stacking ability in 700 pages of emails leaked last year.

The South Australian Liberals lost power to Labor after just one term in March.

The Queensland Liberal National Party – an organisation whose membership has become increasingly conservative and, like Liberal branches in Victoria and WA, infiltrated by hardline Christian advocates – hasn’t been in government since 2012, when Labor’s Annastacia Palaszczuk became premier. 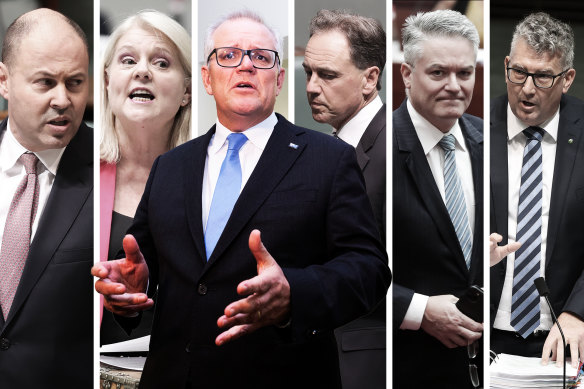 Labor comfortably holds government in both the ACT and the Northern Territory, too.

NSW is alone on the mainland, with Tasmania the only other state held by the Liberals.

Former home affairs minister Karen Andrews – infuriated to discover that Morrison had assumed separate power over her ministry – is so far the only senior Liberal to call for Morrison to resign from parliament.

One of the reasons her call has not been taken up by others who are equally – but privately – dismayed, according to Liberal strategists, is that a byelection in Morrison’s electorate of Cook, in Sydney’s southern suburbs, could prove embarrassing and cause extra problems for Perrottet’s government in the coming state election.

Howard, always cautious and protective of the Liberal Party’s interests, has been the leading advocate for Morrison remaining in parliament to prevent a byelection.

Cook has long been considered a conservative and safe Liberal seat.

Morrison won it in May by a margin of 12.5 per cent. However, this was down from his previous 19 per cent margin, and the swing against him at the election was double the NSW swing against Liberals of 3.2 per cent.

Indeed, Morrison’s personal unpopularity has been blamed in large part for the Coalition’s loss at the federal election. Some of the Liberal Party’s most “blue-ribbon” seats were taken by “teal” independents who pointedly campaigned for meaningful action on climate change, an integrity commission and better treatment of women – all considered Morrison’s vulnerable flanks.

The negative publicity that would accompany any further reduction in the Liberal hold on such a seat as Cook in the case of a byelection would be the last thing the Liberal Party needs, particularly in the lead-up to an attempt to retain the last mainland state Coalition government.

Morrison, anyway, has declared he has no intention of resigning in the near future.

This guarantees continuing pain for Dutton’s Coalition when parliament resumes on September 5.

The Greens will move to send Morrison to the powerful privileges committee to be examined for possible contempt of parliament for failing to disclose to the House of Representatives his secret powers.

Should that occur, Morrison would likely face a censure motion. Censures against backbenchers are exceedingly rare, but in effect amount to ritual humiliation.

Liberal MPs would find themselves in the position of having to publicly defend their former leader.

Morrison’s main explanation for his extraordinary behaviour is that he needed extraordinary “reserve” powers to face down the COVID-19 pandemic that was threatening Australian lives and society.

For his party to now publicly abandon him on the floor of parliament would be tantamount to disavowing their policies during the pandemic emergency.

“He’s put us in a terrible spot,” one Liberal MP says, speaking on the condition of anonymity.

Rather than take a backward step himself, Morrison spent a desperate hour on Wednesday trying to persuade the gathered media and anyone prepared to follow the TV feed of his press conference that no one but he could possibly comprehend the pressures that persuaded him to secretly have himself granted separate responsibility for other ministers’ portfolios during 2020 and 2021.

“You’re standing on the shore after the fact,” he told sceptical journalists. “I was steering the ship in the middle of the tempest.”

Much of it declared Morrison’s explanations were either confused, contradictory or raised more questions than they answered.

He was accused of displaying a lack of trust in his cabinet colleagues to exercise their ministerial responsibilities, though he argued he had only once used what he called his “reserve emergency powers” to overrule a minister. His use of ministerial power to override then-resources minister Keith Pitt and veto a gas-drilling proposal off Sydney’s coast had nothing to do with the pandemic, he stressed.

Among the most cutting commentary came in a column by Amanda Vanstone, who served as a minister for all 11 years of the Howard government.

“Scott Morrison’s suggestion that he had himself sworn into a number of ministries because we were in a crisis doesn’t pass either the front bar of the pub or the tuckshop test,” she wrote in The Canberra Times. She pointed out that in a crisis, a junior minister or any other minister could be appointed expeditiously.

“If you think you alone can save the day, your brain is in a bad space,” Vanstone wrote. “Some would call it delusional.”

Morrison’s own explanation for keeping his most senior ministers in the dark even as he inhabited their portfolios appeared to convince no one. He didn’t want to cause them anxiety, he suggested.

“I was concerned that these issues could have been misconstrued and misunderstood and undermine the confidence of ministers in the performance of their duties at that time, and I did not consider that to be in the country’s interest,” Morrison said, to accusations from journalists that he simply didn’t have the courage to tell his colleagues.

Morrison did, however, confide his extraordinary arrangements to two journalists from the very start, which is how the issue eventually made its way into the public forum.

The journalists, Simon Benson and Geoff Chambers, of The Australian, were let into the secret by Morrison two years ago, about the time he had the governor-general assign him power over the health and finance portfolios.

Benson and Chambers were writing a book, which has now been released as Plagued, Two Years of Hell, and presents itself as the inside story of the machinations at the highest levels of government during the first two years of the pandemic.

That the two journalists kept their scoop about secret ministerial arrangements to themselves until the book was published after the election has excited much comment among other political journalists.

But to Morrison, who has made a career of marketing himself as a man for all seasons, it was a matter of telling his side of the story before it could be misconstrued.

“That book was written based on interviews that were conducted at the time, in the middle of the tempest.”

Meanwhile, Hurley, facing questions about why he had not required the arrangements to grant Morrison power over numerous portfolios be made public, took the highly unusual step of issuing a statement washing his hands of responsibility.

“The governor-general had no reason to believe that appointments would not be communicated,” Hurley’s statement said.

This, however, did not explain why Hurley had not comprehended that appointments were being kept secret when he assigned Morrison new roles a year after the first had not been made public.

The intrigue over Morrison’s penchant for secrecy, and its ramifications for Australia’s constitutional conventions, the exercise of democracy and the ability of a single politician to use the rules to hoard power, remains far from settled.

The tempest, Morrison might consider, will rage for some time yet.