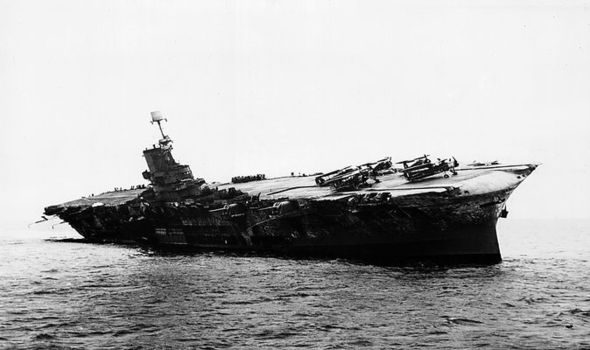 IN TRUE British style, Daily Express war reporter Norman Smart was just settling down for a spot of afternoon tea in the officers’ mess when the torpedo, launched from a German U-boat, struck HMS Ark Royal amidships. It tore a 130ft by 30ft hole in its hull, hurling its cargo of aircraft, loaded with explosive weapons, into the air (along with Norman’s tea) and sending one of the most famous ships in the Royal Navy on its final voyage to the bottom of the Mediterranean.

Thanks to the bravery and professionalism of the officers and crew, in his report for the Express, Smart described the 22,000 ton ship as having gone down “like a gentleman” – only one life of the roughly 1,500 people on board was lost – that of 44-year-old Able Seaman Edward Mitchell.

To borrow Smart’s analogy, HMS Ark Royal had, up until then, been considered one of the “luckiest chaps” in the Navy. Launched in 1938 at a cost of £3million (around £200million in today’s money) the aircraft carrier was then the most advanced, as well as the most expensive, ever built.

SHE had distinguished herself in the Second World War, surviving several attacks and playing a major part in the defeat of Nazi Germany’s largest battleship, the Bismarck, in one of Britain’s most famous naval battles. But that ship (Ark Royal, pennant number 91), torpedoed off the coast of Gibraltar on November 13, 1941, was actually one of five to have borne this iconic name.

The very first, a galleon armed with 38 guns, was built in Deptford in 1587 and originally named Ark Raleigh after her first owner, the explorer Sir Walter Raleigh. Purchased for the sum of £5,000 by Queen Elizabeth I and renamed Ark Royal, she became the pride of the Tudor navy, helping to defeat the Spanish Armada in a 50-year career so victorious that, in honour of her, the name was adopted for flagships.

Dr Rob Blyth, senior curator at the National Maritime Museum in Greenwich, explains: “The name Ark Royal was revived in the 20th century as the Royal Navy began to employ aircraft carriers to maintain its advantage at sea in the face of new technologies. It neatly combines the strong royal association of the senior service with the biblical symbolism of the safety and deliverance of the Ark.

“Rather like the dove returning to Noah with an olive leaf, the carrier, it was hoped, afe would provide a safe platform of return for the ship’s aircraft.”

The second Ark Royal, launched in 1914, was Britain’s first purpose-designed and built seaplane carrier. The bare bones of a ship that was originally planned for life as a merchant “tramper” was bought by the Royal Navy whilst still being built at Blyth docks in Northumberland and converted for use in the First World War. Her first mission was the Gallipoli campaign in the Dardanelles.

After seeing action in conflicts around the world, she was recommissioned as a training ship, from which fighter pilots would practise taking off assisted by the newly invented catapult system that helped launch them into the air without the need for long runways.

The third vessel to bear the name is the subject of a book, Ark Royal, by Mike Rossiter who, in 2004, led a project to find and explore the sunken wreckage, 1,000 metres down on the Mediterranean seabed.

He told the Express: “The Ark Royal was involved in action quite early on in the war. It made people feel confident. It had a feel-good factor and created a potent image of a strong Royal Navy and a successful Britain at a time when things were actually a bit bleak.

“You had the collapse of France, Dunkirk and the invasion of Denmark, but people could look to the Ark Royal and say, ‘Ah, look, now we’re fighting back.'” Despite that ship’s sad demise thanks to a German U-boat, the name would be used again. Ark Royal number four, built at Cammell Laird in Birkenhead and launched in 1950, took part in many naval exercises but, despite being nicknamed The Mighty Ark, never actually saw active combat duty.

The closest she came was being sent to Egypt in the Suez Crisis of 1956. On the way there, however, she developed a fault in her propeller shaft and had to turn back to the Royal Navy base at Devonport.

Possibly her finest hour was as a TV celebrity. She featured in the 1960s BBC comedy series Not Only… But Also with Peter Cook and Dudley Moore, for which pianos and toilets, rather than aircraft, were launched off her decks into the sea. Later, she was the star of another BBC television series, Sailor, which gave a fascinating insight into the lives of the officers and ratings on board during the ship’s deployment to NorthAmerica in 1976.

The show was a huge hit and, as well as making the Ark Royal a household name in Seventies Britain, did no harm to the career of Rod Stewart whose best-selling single, Sailing, was the theme song.

She was decommissioned in 1979 and left a gap in Britain’s naval defences, which some commentators believe may have encouraged Argentine forces to invade the Falkland Islands. Mike Rossiter, also the author of Sink The Belgrano, about the fate of the Argentine warship, recalls a story told to him by an admiral present at the meeting where Margaret Thatcher was informed that Argentina had just invaded British territories in the South Atlantic.

According to Mike’s source, her first reply was: “Send in the Ark Royal! Where is it now?”, to which, somebody had to inform her, rather sheepishly: “I’m very sorry Prime Minister but we haven’t got it any more.”

Oliver Steward, an associate tutor in International Security at the University of East Anglia and member of the Royal Institute for International Affairs at Chatham House, is a firm believer that decommissioning the fourth Ark was a major factor in Argentina’s decision to invade.

“The scrapping of the HMS Ark Royal in 1980 marked a decline in the Royal Navy’s ability to deploy fixed-wing air-power, impacting upon the perception by our adversaries (such as Argentina) of the UK’s naval power,” he says.

THE most recent Ark Royal was the Invincible class aircraft carrier (pennant number R07), built by Swan Hunter in Wallsend in the early Eighties. Originally due to be called HMS Indomitable, she was renamed after a public campaign.

After being christened by the Queen Mother, she saw active service in 1993-94, helping patrol the no-fly zone in the Bosnian War, as well as taking part in the 2003 invasion of Iraq.

Whilst serving in the Gulf, two of her Sea King helicopters collided mid-air, resulting in the death of seven servicemen. George Bone wasWarrant Officer Master-At-Arms at the time, responsible for the smooth running of the Ark and the welfare of personnel on board.

He recalls how those fatalities affected the morale of the ship. From being known as what sailors refer to as a “happy ship”, George said: “People went from laughing and joking as they ate in the mess to sitting in deathly silence, just staring or even crying into their food. It was solemn.”

George, now retired after 32 years of service, is chairman of the HMS Ark Royal Association. A Geordie himself – his name is actually Malcolm but, as per Navy tradition, anyone from the Newcastle area generally gets called George (even his wife calls him George) – the softly spoken 68-year-old, who was awarded an MBE for his work with the Sea Cadets, says almost every sailor wanted to be on the Ark Royal.

“She was a Geordie ship, built on the Tyne like me, so she was always the one I wanted to be on,” he says. “But it wasn’t just Geordies who loved her. There was a celebrity auction at some posh charity event and Rick Parfitt [from Status Quo] won the chance to spend a day aboard any ship in the Navy.

“He chose the Ark and I got to sing with him on deck.The band even came back later and recorded the video to one of their singles – Jam Side Down – on the ship.” In fact, the Ark was a hit with a lot of celebrities. A pop concert, Rock Around The Rock, was staged on its deck in 1986 whilst the ship was moored off Gibraltar, featuring Bob Geldof, Cyndi Lauper, Alison Moyet and Paul Young.

Ark Royal number five’s last moment of glory was in 2010 when she took part in Operation Cunningham, rescuing British travellers stranded abroad when flights were grounded by volcanic ash from the Eyjafjallajökull eruption in Iceland.

The following year she was decommissioned in 2011 as part of the Government’s Strategic Defence mG an fo Tu and Security Review and later sold for £3million to be scrapped by a Turkish company.

Sadly, that’s where the Ark Royal story ends, for the moment at least. And while many people, both in the Royal Navy and the British public alike, hope there’s something in the MoD’s future plans that might continue the legacy set by its five namesakes, it seems unlikely for now.

But if, just by chance, another HMS Ark Royal were to appear on the distant horizon, there’s at least one correspondent who, like old Norman Smart, would be proud to climb aboard and sail with her crew, reporting back to our readers about life above and below decks on one of the most famous ships in British history… just so long as there’s no more rude interruptions to afternoon tea.