In a freedom of information (FOI) request lodged with ANU, a timber industry advocate applied to access any emails between Professor Lindenmayer and The Age’s environment reporter Miki Perkins. The same person, who can’t be named, also requested emails between Professor Lindenmayer and Michael Foley, the climate and energy correspondent for The Age and The Sydney Morning Herald. 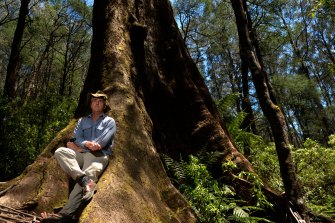 In a separate application, Justin Law, the managing director of Forest and Wood Communities Australia, made an FOI request for emails between Professor Lindenmayer, ANU research fellow Chris Taylor and the ABC’s national science technology and environment reporter, Mike Slezak.

Professor Lindenmayer is one of the world’s most cited scientists, and has previously clashed with the Australian forestry industry over his call to immediately end native forest logging. He says his research shows logging makes native forests more prone to fire because they lose moisture and grow back more densely. These findings have been challenged by some other scientists.

Professor Lindenmayer said he was shocked to receive the FOI requests, and described the process as trying to “shoot the messenger”.

“I do my work to make my contribution to the country and it’s impossible for journalists to keep up with science these days, so we’re asked to communicate our results, as we should,” Professor Lindenmayer said.

“This whole process of trying to shoot the messenger – which is journalists – and beating up on scientists is not in the spirit of trying to progress discussions and debates.”

Professor Lindenmayer has more than 30 years’ experience in ecology and has written more than 1000 published items, including more than 600 scientific papers in international journals and 40 books.

Justin Law is the managing director of Forest and Wood Communities Australia, which describes itself on its website as representing families and communities that rely on a “prosperous timber industry and want to see us stand up to bad government policy and bias [sic] media”. Mr Law said the group has 350 financial members.

In response to questions, Mr Law said he made the FOI request of the ABC on behalf of his organisation to get a better understanding of the connection between the ANU’s Fenner School of Environment and Society [where Professor Lindenmayer works] and “some sectors of the media which appear to support and willing amplify the views of a number of academics on issues which affect our membership”.

He agreed to issue a public apology in April after Professor Lindenmayer sued him for defamation in the Victorian County Court after Mr Law made personal attacks on him on social media.

In his apology, posted on social media, Mr Law said he accepted his statements could be interpreted as meaning Professor Lindenmayer’s opinion did not deserve to be considered.

A spokesperson for ANU said it supported Professor Lindenmayer, and described him as a world-renowned scientist and one of the leading forestry experts on the planet.

“We actively encourage all ANU researchers to engage with the media,” the spokesperson said.

“We would be deeply concerned if external forces were attempting to gag our researchers from speaking to the media, especially if it was motivated by a disagreement with the research or scholarly ideas produced by our experts.”

The ANU released some emails through the FOI process.

Last year more than 100 Australian and international scientists wrote to the Andrews government to back Professor Lindenmayer after the head of Victoria’s logging agency, VicForests chief executive Monique Dawson, refused to accept his published opinions or “consider him an authority”. At the time, a spokesperson for VicForests said many academics and fire experts agreed that harvesting did not elevate fire risk.